Just minutes ago NVIDIA announced the industry’s first hybrid technology for PC platforms—Hybrid SLI—that addresses two critical issues: increasing graphics performance and reducing power consumption. Hybrid SLI enables NVIDIA motherboard GPUs (mGPUs) to work cooperatively with discrete NVIDIA GPUs (dGPUs) when paired in the same PC platform. Hybrid SLI provides two new technologies — GeForce Boost and HybridPower — that allow the PC to deliver graphics performance for today’s applications and games when 3D graphics horsepower is required, or transition to a lower-powered operating state when not. In order to show off Hybrid SLI and the technology that makes it happen, NVIDIA had to show off a number of unreleased products. 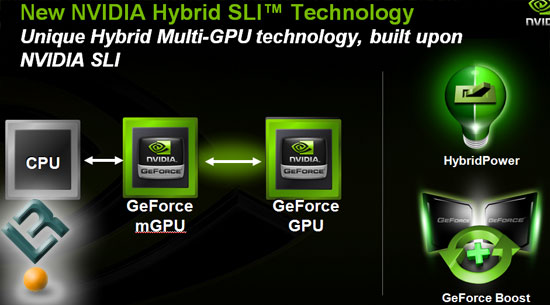 NVIDIA recently briefed Legit Reviews on these new technologies, but the briefing took place the day before CES.  Due to time constraints our coverage of NVIDIA’s announcements will be brief, but we will go into further detail when we get products back in the lab. 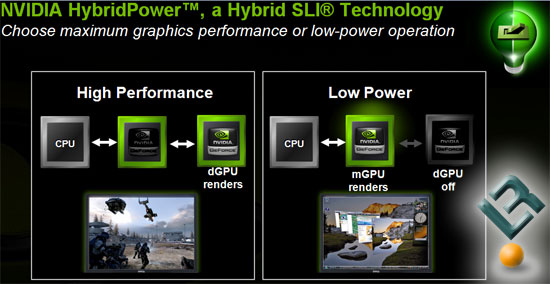 NVIDIA HybridPower is the technology that allows you to choose between the dGPU and the mGPU. When you are using integrated graphics the discrete graphics will completely shut off. Turing them off is a big deal as it will lower power consumption and heat. This technology also works with SLI GPUs as you can be gaming on SLI and then when you are not gaming it will run with just the integrated graphics. Other than having 16 PCI Express lanes a PCIe bus also has an SMbus that is used to send commands to a microcontroller on the video card to turn the card off and on. These new commands only work on HybridPower enabled graphics cards. Cards like the GeForce 8800 Ultra will not work as is was developed before HybridPower was drawn up, so keep in mind a HybridPower compliant card is required. This also applies to all GeForce 8 and 7 series cards, so even the recently released G92 powered graphics card will not be compatible. Not even all of the GeForce 9xxx series will support HybridPower technology because the G92 GPU does not have the proper hardware. Right now this is driven by the Vista power plan and can detect when the system is at an idle state. This means that HybridPower only works on Vista, so Windows XP and Linux users are out of luck once again. HybridPower is not dependant on Microsoft, so in terms of development NVIDIA has the ability to take the ball and run with it. NVIDIA hopes to have HybridPower working with as little user input now and in the future they ultimately want it to be unambiguous to the user. Notebook users now don’t have to choose between battery life and performance, because when you aren’t using graphics demanding applications the discrete graphics will not be enabled. This will prevent the battery life being reduced when doing general desktop applications. NVIDIA believes this will be a big deal as people that travel office can have the power to watch videos and do office work for the duration of a flight. 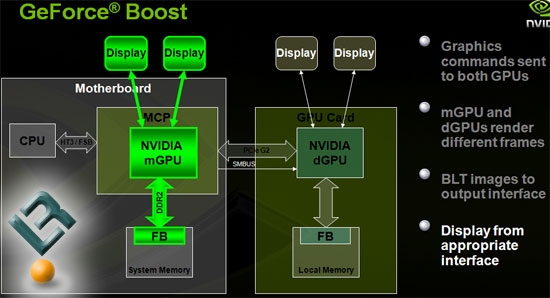 GeForce Boost is the ability to take a motherboard GPU and a discrete GPU and render together like SLI does to boost the over all graphics performance. The idea is that you get a boost in performance by plugging in a discrete graphics card into a board with integrated graphics. The graphics commands are sent to both GPU’s and then the mGPU and dGPU render separate images. The images then go through a BLT (block copy) from the local memory to the system memory and are seamed together to be sent to the display with the local display interface. GeForce boost is only supported on GeForce 8400GS and the GeForce 8500GT. NVIDIA expects more mainstream graphics cards that support GeForce Boost to come out in the future. This is not an enthusiast technology, so it is not expected to be supported by higher end graphics cards. When it comes to notebooks, none of the current notebooks on the market support GeForce Boost. If this all sounds familiar it is because ATI recently announced Hybrid CrossFire, which is a subject we covered last month in this article.