When we stopped by their booth, Enermax was quick to show us their new power supply called the MODU82+ which boasts an 82% maximum efficiency at 20-100% load and a “world ready” 100-240VAC in with automatic adjustment and active PFC. It also features triple rails and modular cables,  two of which are 12pin connectors for possible upcoming CPU’s and GPU’s which may require them. They see it as a way of future proofing your purchase. The fan side of the PSU has also been modified to form a tighter seal in the case so there is less turbulence from the side air draw. This should be available in mid-February and priced slightly lower than their existing Liberty series. 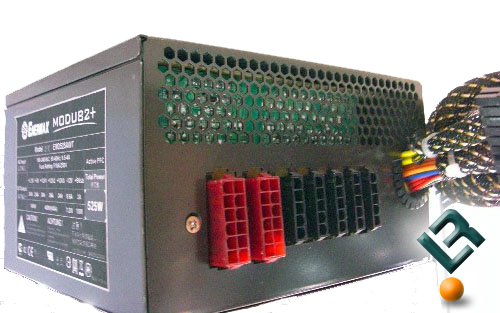 Next, Enermax showed us their new “bat wing” fans. The blades of which, oddly enough, are shaped somewhat like bat wings (hence the name). This design is reported to increase airflow by as much as 30% while remaining very quiet. Also unique to the fans are the “halo” metal rings that surround the fan with the Enermax name punched out. The Enermax rep told me that this allows the air to escape from the sides instead of bouncing back into the fan and causing turbulence which is a big contributor to noise. Since this air is not directed forward, there is little airflow lost and the fans are rated as 24-53CFM (1200RPM max) at 8-14dBA which is impressive if it is indeed accurate. 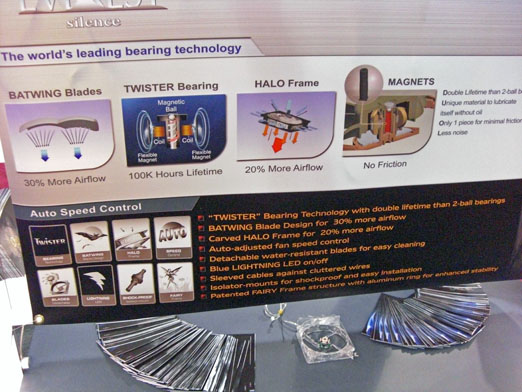 There are actually three version of the fans. The Everest has blue LEDs and auto-adjusted fan control, the Cluster fans are white with that are PWM speed controlled and the Magma which are red and black with a claimed 100,000 hour life span at 85 degress Celsius. All of these fans have removable blades for easy cleaning and should be available soon. 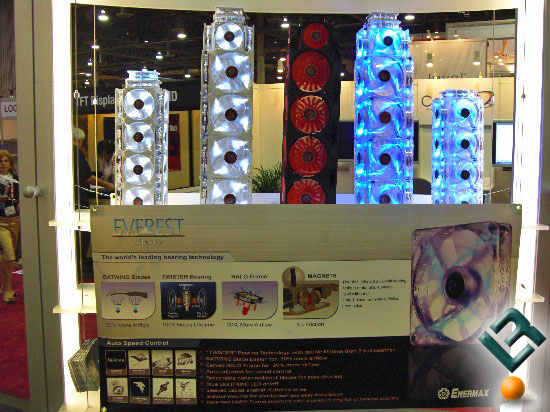 Last but certainly not least, we were shown the new laptop cooler. This is again a unique design which took them a while to develop as they had difficulty reducing the fan height due to its large diameter. It was hard to hear in the crowded convention center but the rep claimed that the fan is completely silent on the low speed setting of 500RPM and near silent on the high speed setting of 900RPM. It comes in silver or black and should be available in mid-March for around $50USD. The only downside that I could see is that the fan requires enough power draw that the USB connector has no pass-through capability. 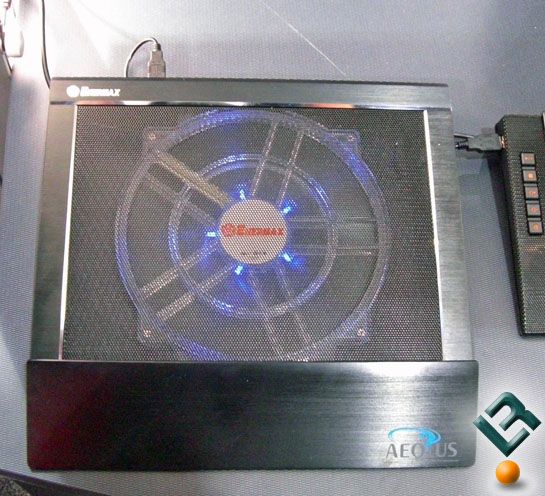