The Consumer Electronics Show (CES) has yet to kick off, but when it comes to computer hardware it seems that massive 2000W internal and external power supplies are causing quite a buzz among the masses. I strongly believe that a 2000W power supply is overkill for today’s hardware and unless someone releases a USB arc welder I’m personally going to hold off on something that I would still consider novelty item. What I’m more interested in is something that can fit into my current system and will have enough power to support some of the products that are going to come out later this year. While on the test bench I use PC Power & Cooling 1000W power supplies I must admit that in my personal system that I’m still using a smaller PSU. If you are wondering why I haven’t upgraded or changed to one of the 1000W PSU’s the answer is simple. They won’t fit in my case and I love my current case! 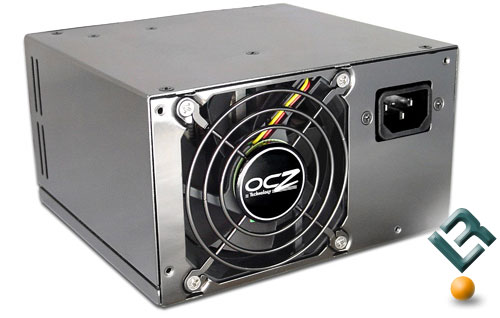 I know many feel the pains that I’m having and to be honest so has OCZ Technology. Finally someone has come up with a quality power supply (from the looks of it) and made it in a standard size. Granted this 1000W power supply loses some features that I like in high end power supplies like big silent fans. OCZ had to do away with the 120mm fan found on many of the GameXStream systems and use an 80mm fan to make everything fit in such a compact unit. This is a small sacrifice that is to be made for a power supply of this magnitude. Seventy is the answer for those worried about how many Amps are available on the combined +12V rail, which means this PSU should have no problem powering a set of 8800GTX’s! OCZ Technology stayed with FSP Group as the ODM, which is the same maker of the GameXstream power supply that we recently reviewed and gave the thumbs up. With features like energy saving Active PFC and four 6-pin PCI connectors this power supply will easily handle the latest multi-GPU systems from ATI and NVIDIA. 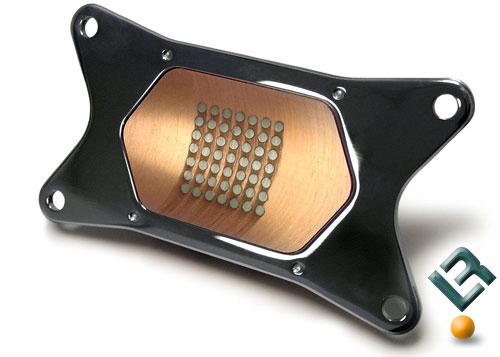 Another interesting OCZ product that looks promising is their upcoming water block called the SilverArray. Why is OCZ releasing a water block? I’m not exactly sure why, but OCZ has been announcing tons of new products in markets they have no presence in. While this is all fine and dandy I hope these products don’t end up like the OCZ Cryo-Z that we showed you last year at CES and never made it to market still twelve months later. The SilverArray is unique looking because it has 14 allen head set screws that hold the clear cover onto the base. Other than that it looks just like any other water block until you flip it over and look at the copper base. 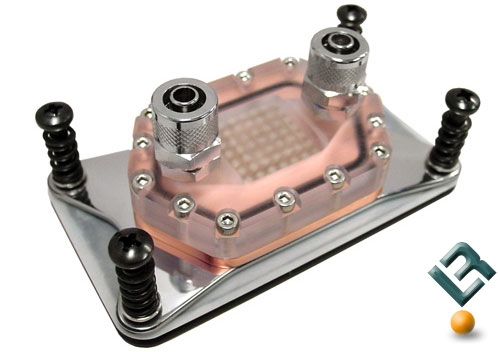 Looking at the underside of the water block we can see where this water block separates itself from many of the others on the market today. Instead of using a single piece of machined copper for the base this water block has 42 silver ‘rods’ that have been inserted through the base. Each silver rod has direct contact with water flow and the processor that is being cooled. Why do this? If I remember my numbers from college right, silver conducts heat ~7% better than copper. This means improved cooling as the heat will be transfered from the IHS to the rods faster. For those interested in fittings rumor has it that it will come with standard 1/2-inch or 3/8-inch barbs. If the OCZ SilverArray performs along the lines of the Swiftech Storm it might be a great block if OCZ can get the price down and mass produce them. It will also be interesting to see if OCZ develops there own water kit sometime in the near future. With water cooled memory modules and CPU blocks it seems like OCZ is well on their way to making a water kit of their own. Could we see Corsair and OCZ butt heads in the water cooling market in 2007? Only time will tell, but competition is good!

Speaking of OCZ did anyone else notice that OCZ Technology has an 8800GTX listed for sale on Newegg for $629.99?  OCZ is expanding like no other!

Legit Reviews will bring you more coverage on other great new products later this week as we will be doing daily coverage from CES 2007 on all the latest in hardware products that will change your PC experience.