From the secret performance labs at WD comes the revolutionary WD Raptor X SATA hard drive, the first ever drive with a clear view of the internal workings. We have been talking with Western Digital on the development of a clear hard drive for a number of years and the day has finally come that we saw a working model. What makes this possible is a large, crystal-clear lens on the drive to let you see into the inner workings and witness the drive in action. The lens was the hardest part of the design and it took the crew at Western Digital nearly a year to get working.

Finding a material that would withstand heat, pressure from 10,000 RPM turbulence and electrostatic discharge (ESD); provide a crystal-clear, unobstructed view of the disk and head assembly; and maintain high-volume manufacturability was a monumental challenge. WD finally settled on a special grade of crystalline polycarbonate and shaped the lens in a way that would maximize viewing area, structural rigidity and aesthetics. The team used laser Doppler vibrometers to determine optimal lens placement, while maintaining overall drive integrity. A unique ESD-dissipative coating, when used with the conductive frame, redirects an unwanted ESD charge out of harms way, protecting the read/write heads from potentially damaging zaps of static discharge. The lens is attached to the cover with a foam adhesive, chosen for its gap-filling and sealing capabilities.

Once Western Digital got the window and seal down the rest is history and the final production drive can be seen below. 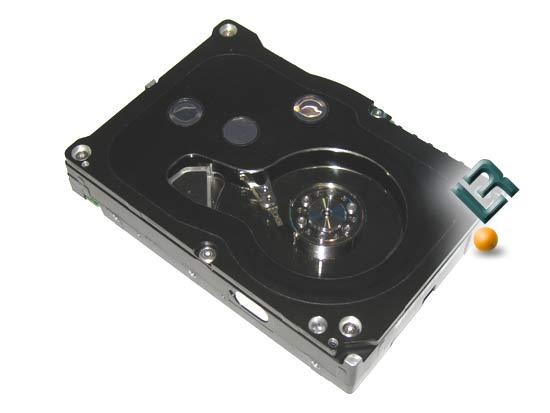 As you can see from the image above the drive is perfect for anyone with a clear case or those with a case window showing the hard drive bay.  The clear window does flex when pressed on and it was advised not to press hard on the window as it might break the seal. During use the Raptor X looked great when at idle on the desktop since you can see the arm inside the drive jitter while the platter is spinning.  Under normal Windows it looks even better as movement increases. Below is a picture of a demo system running the new Western Digital Raptor X drives. 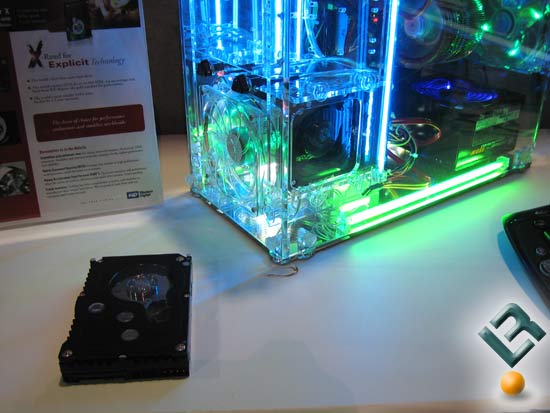 Other than adding a clear window Western Digital did also make a number of other changes over the previous Raptor models. This drive features a 10,000 RPM spin speed and doubles the capacity to 150 GB. Since these are the high end Western Digital drives they come with a 5-year warranty that covers drive failure. While the window looks cool it does increase the price of the model $50 over the standard black version.  That puts the drive at $349.99 on the Raptor X (Model WD1500AHFD) hard drive. While the price does tend to put it out of the price range of the average consumer that was never Western Digital’s intentions for this product and we know that. These upgrades have left WD claiming that this is the ultimate hard drive for PC performance enthusiasts everywhere. If performance was based off looks alone this thing is X-Rated! If you have to have it now you can pre-order it directly from Western Digital for $349 today and free shipping. 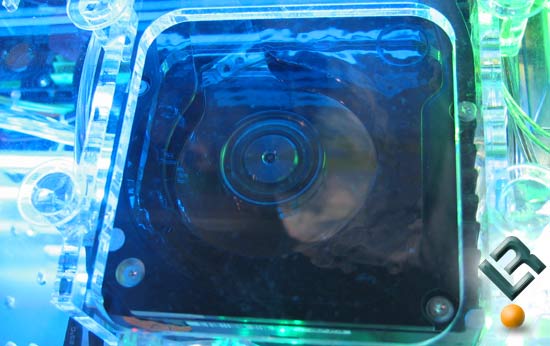