In March of 2005 the SD Card Association (SDA) announced plans to finalize specifications for a new, super-compact memory card called the microSD. Those in the memory industry know that the MicroSD format was originally created by SanDisk and called T-Flash and then TransFlash before being re-named MicroSD when adopted by the SD Card Association. It took nearly a full year for the technology to take off, but now microSD cards are said to be the ‘hot’ item in 2006 for the mobile phone market. The microSD card is currently the world’s smallest mass produced memory card measuring just 11mm x 15mm x 1mm, and will be completely compatible with SanDisk Corporation’s TransFlash format. Recent phone models like the Motorola RAZR V3i, E1070 and the NEXTEL i870 all use microSD as their flash memory expansion slot. Now that phones are out with microSD slots it only makes sense for memory companies like Kingston Technology to support these devices. 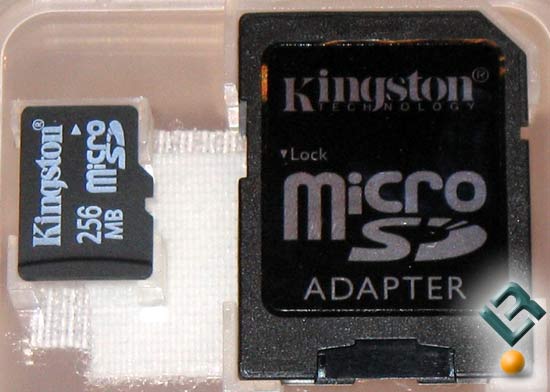 As you can tell flash memory is getting smaller and right now Kingston has launched microSD cards in 256MB with 512MB cards coming out in the near future. While the sie does limit the amount of memory that memory companies can put on them they still have many of the same features that SD and miniSD cards have like the ability protect against accidental data loss via the built-in write-protect switch. Kingston?s new microSD cards ship bundled with an SD adapter for use as a full-size SD card. The Kingston SDC/256 256-MB microSD card is already listed for sale on the Kingston website for $32 for those with phones using microSD memory.