An Update of the Corsair 620HX Power Supply 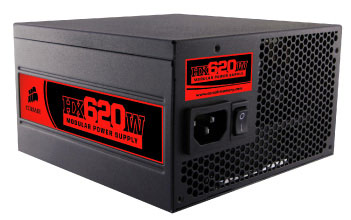 There are many rumors floating around about what it takes to run a pair of NVIDIA GeForce 8800 GTX video cards in SLI. Further questions arise when it comes to running those same video cards together with the latest Intel QX6700 in stock and overclocked configurations. Today we put one question to rest, will the Corsair 620HX power a pair of 8800 GTX video cards paired up in SLI with an overclocked and watercooled Kentsfield? This is also a chance to look back at a product that we gave the Editor’s Choice Award to last year and to see if we made a good call or not by doing so.

To get right down to it many people have a lot of doubt about this, most stemming from CES 2007. At Corsairs suite at the Bellagio for CES, each system that they had on display featured 8800 GTX SLI along with various overclocked Intel and AMD processors, including 4×4. Each system was powered by Corsairs 620HX PSU. During the course of our visit (and many Coronas) I cornered a Corsair rep and asked him what they had done to get all of these systems running with their 620HX power supply. His reply was We just added the PCI-E cables. I was a bit skeptical of this considering NVIDIA has been telling the press since launch that the GTX in SLI requires a minimum 750w PSU. The issue has kind of sat on the back burner for a while until recently NVIDIA started looking into having the Corsair supply certified for AMD’s Quad FX platform because of what they saw at CES.

Last week I purchased my own Corsair 620HX based on what the rep shared with me. The system I planned to run had substantial requirements, QX6700 overclocked and watercooled to 3.5GHz, and 8800 GTX SLI. A single Raptor X drive, an external USB DVD drive, a modified DDCT-01 water pump from Petras Tech Shop, and 2x 120mm fans round out the rest of my power consuming hardware. 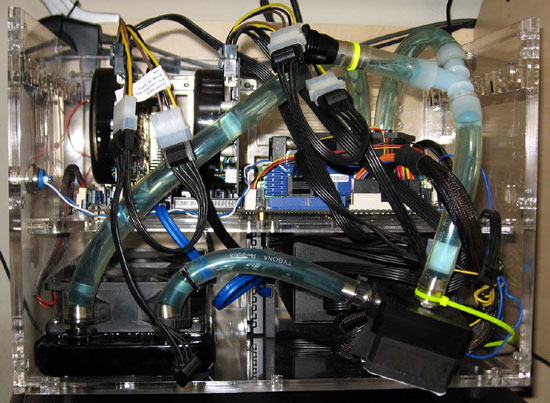 At this point, I had some serious doubt that this was going to work. After digging through all of my cables I found a pair of molex to PCI-E cables and set out to get it all hooked up. After crossing my fingers and saying a little prayer, I pressed the power button and the system booted right up with no drama at all! After enabling SLI and rebooting I fired up 3DMark06 expecting to have a crash soon after. Surprisingly, I am still waiting for that crash now and its been nearly 2 weeks. I’ve spent a fair bit of that time gaming in Battlefield 2, Counter Strike: Source, Half-Life 2: Episode 1, Rainbow Six: Vegas, and Supreme Commander all at 2560×1600 resolution. Not once have I had a single problem with my setup (other than NVIDIA control panel driver bugs).

Corsair is now making dual 6-pin PCIe connectors, running two cables will give you four 6-pin PCIe connections. While the prototype cables are not sleeved they get the job done better than the adapters as free up the four of the 4-pin molex connectors. Other than this, Corsair is also working on getting their 8-pin PCIe cables ready for when AMD.ATI finally get around to launching their R600 based products sometime in Q2 of this year. Here is one last photo of my system for your viewing pleasure with the latest prototype PCIe cables, and in case you missed it, here is the original review that Nathan did on the Corsair620w HX power supply. 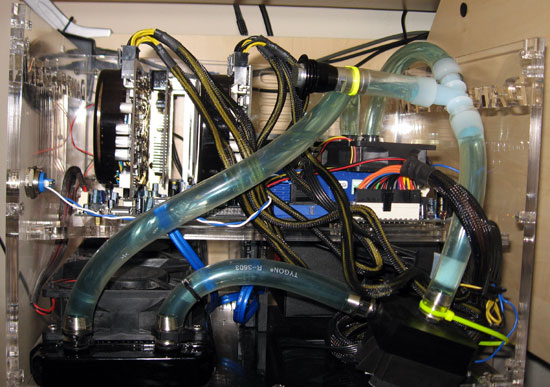