Fallout 4 is less than a week away and Bethesda has released a handful of screenshots and more information on the graphics technology behind the game. Fallout 4 runs on a modified version of the Creation Engine that has a new physically based deferred renderer that was added after they company released Skyrim. This helped the game creators to use more dynamic lighting effects and make the surfaces of objects look more realistic as the light reflections on wood and metal are totally different. To help create volumetric light the team at Bethesda turned to NVIDIA’s Volumetric Lighting technology to ensure the ‘God Rays’ look better than ever. The feature appears to be using the GPU’s hardware tessellation capabilities to render the volumetric light, but noted that it’s not restricted to just NVIDIA GPU’s and will work on all platforms. We aren’t sure

As always, our world features fully dynamic time of day and weather. To create that volumetric light spilling across the scene (sometimes called god rays) we worked with our friends at NVIDIA, whove we worked with dating back to Morrowinds cutting-edge water. The technique used here runs on the GPU and leverages hardware tessellation. Its beautiful in motion, and it adds atmospheric depth to the irradiated air of the Wasteland. Like all the other features here, weve made it work great regardless of your platform.

You can see one of the screen shots of the lighting effects in action below. 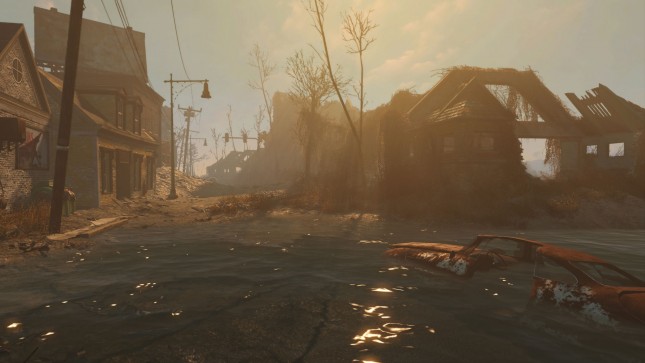 Here is a short list of the features that Bethesda has added to the latest version of the Creation Engine:

Fallout 4 will be released on November 10th onPlaystation 4, Xbox Oner and PC.