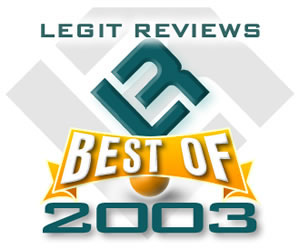 Another year has come and gone, but over the course of the year there are some products that have stood out from the crowd. To make things a bit more interesting we are also including some interesting categories and some new unseen pictures that have not been published on Legit Reviews or the web thus far.

Legit Reviews is neither an AMD or Intel fan boy site and to be quite honest I use both CPU’s on my personal systems. Although we have unlocked ES sample processors on the test bench we retail purchased processors bought just like you from online retailers. Since we are coughing up our hard earned cash we want the best price versus performance ratio and the choices are clear for both processor companies.

Not too long after the Barton’s were released by AMD the enthusiast community quickly found out that with a little extra voltage that these CPU’s could easily reach AMD Athlon XP 3200+ speeds while also running 400MHz FSB. I’ve had about a dozen of these CPU’s from various weeks and have found that all the ones I purchased would run in excess of 2.2GHz! The Athlon XP 2500+ Barton has become “internally” locked by AMD around week 43 of this years production, but enthusiasts already had there “stash” of unlocked processors! This processor can be found today for ~$80 on the American market making it almost a steal.

When Intel launched the Pentium 4 “C” processors in early 2003 overclockers quickly became fond of the low multiplier (x12) found on the locked processors. It easily allowed the enthusiast community to hit 250FSB and sometimes the rare 300FSB for the enthusiast that has all the right stuff to pull off this huge increase in speed. It also happens to be the least expensive of all the Pentium 4 “C” processors, which added to the desire to have one of these processors!

Just because you have one of the newest processors on the market doesn’t mean you have a killer system. Of the dozens of motherboards that have used in 2003 there are some clear stand outs for enthusiasts. This is a very subjective category, but you must look at all the factors that go into overclocking: voltage options, ram compatibility, ability to run memory dividers, minimal FSB limitations and other such areas. With all of this in mind, we would have to say that the ABIT NF7 and the Asus P4C800E fit the bill.

The ABIT NF7-S went through a million revisions, but when the dust settled it turned out to be one killer motherboard for Athlon XP users. The initial NF7-S came without mounting holes around the CPU socket and was almost instantly overlooked by enthusiasts because many common heat sinks would not work. ABIT cranked out a series of revisions changing the tracings on the board while also adding mounting holes, the nForce 2 Ultra 400 chipset and some more BIOS updates to create what we consider the AMD board of the year.

Though the vdimm is not as extravagant on the Asus P4C800E as some other boards, the ability to apply a modification to raise the vdimm helped put this board over the top in our books. It has just about (if not) the best memory compatibility out there when it comes to Intel chipset boards. The Asus P4C800E has not been hindered by FSB limitations in the BIOS nor have we seen any other flukes that some other boards have shown in overclocking. It has been proven to be solid over 275MHz FSB by many diehard overclockers. The Asus P4C800E has proven itself to be as solid as they come.

Early in the year there were a number of brands that were neck to neck in the memory industry with little, if anything, showing a clear “best” brand for performance memory. As the year progressed the memory industry in America got a little ugly as the marketing battles began in the middle of the year , but Kingston and Corsair came away from the mess with their no nonsense marketing approach and were noth among the first to release DDR500 modules to the public.

It was at this point that Kingston used Samsung IC’s on their DDR500 modules, while Corsair chose to go with Hynix IC’s. Since Hynix IC’s proved to be better performers it quickly became the clear winner in the overclockers system. It was also about this time period that Corsair came out with the PRO series that brought the only innovative memory product to the market. By adding some real-time memory activated LED’s Corsair was able to spice up systems while still providing the same performance as the standard XMS module. Are time going good for Corsair? You better believe it as Corsair was able to double in size during 2003 for the second straight year! To secure their lead in the memory industry Corsair released PC-4400 (550MHz) memory at the end of December! Corsair is truly the memory leader of 2003!

Since most high performance users are not ready to jump into water cooling or beyond you can’t go wrong with a heat sink from Thermalright, Inc. They started off the year by releasing the SLK-900U which is a universal heat sink for both AMD and Intel platforms that was larger with thinner cooling fins. This provided much improvement over the SLK-800 that it replaced.

Since these heat sinks cool so well many users have been able to put “silent” fans on these and still be able to overclock where they want to. For those going for every last ounce of performance they accept just about every fan size out there! In late 2003 Thermalright came out with the SP-94 for Intel users and added some heat pipes for even better heat dissipation. Not only does it look wicked it actually helps get the heat away from the processor quicker! They may not be the cheapest heat sink on the market, but if you want it done right the first time start your search at Thermalright, Inc.!