One of the new features of the Intel Core i9-11900K ‘Rocket Lake’ desktop processor is the addition of Intel Adaptive Boost Technology. This performance enhancing feature is found only on Intel 11th Gen Core i9 11900-series processors that end with K or KF. Once enabled, Intel Adaptive Boost will push multi-core CPU frequencies higher than ever before if the power and thermal headroom allows for it. 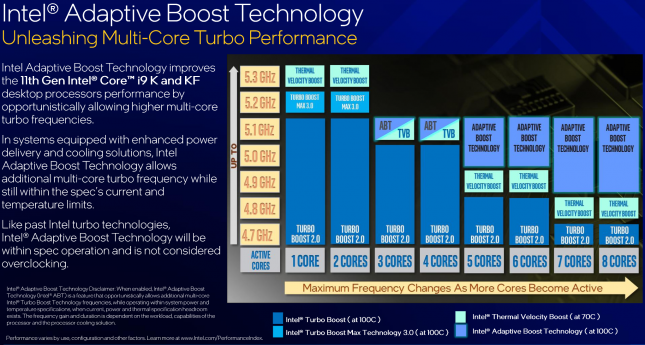 Enabling Intel Adaptive Boost Technology will need to be done by the end user in the motherboard BIOS. Enabling this feature will raise clock speeds between 100MHz to 300MHz as long as your CPU temperature remains below 100C for Adaptive Boost. That sounds high, but Intel Turbo Boost Max Technology 3.0 uses the same temperature ceiling for peak 1 core and dual core performance. That said, you’ll need a great CPU cooler and a good power supply to take full advantage of this feature. You will be using more power and generating more heat, so be prepared for that if you plan on enabling the feature. 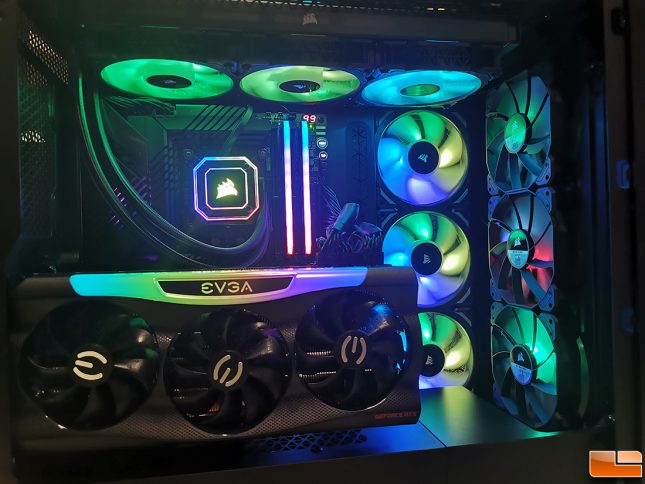 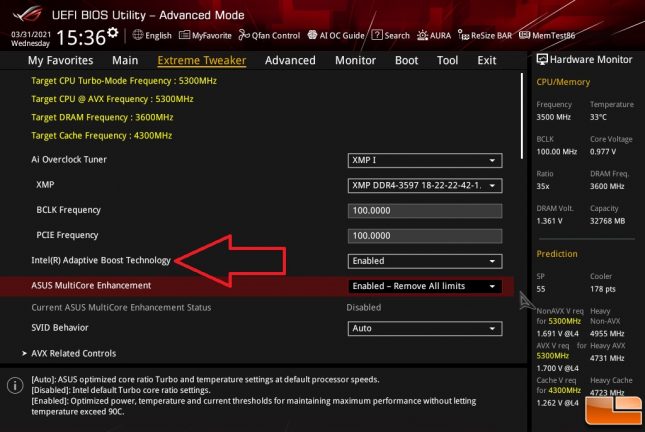 To enable Intel Adaptive Boost Technology you’ll need to enable the feature in your motherboards BIOS On our ASUS ROG MAXIMUS XIII HERO (Intel Z590) motherboard it is found under the Extreme Tweaker menu just above ASUS MultiCore Enhancement. Our testing was completed on March 31st, 2021 on Windows 10 Pro 20H2 and with UEFI version 0704 installed on the motherboard. 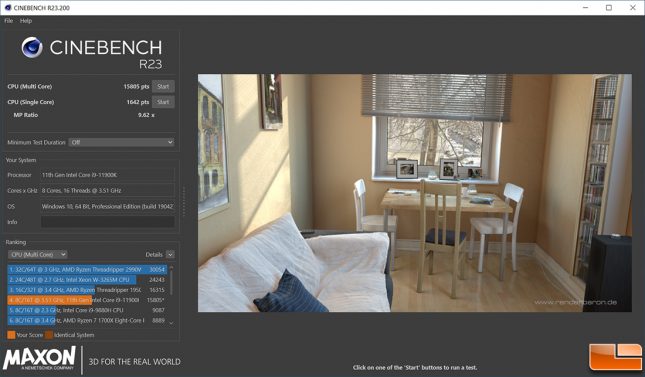 To show you the performance advantage that Intel Adaptive Boost Technology brings to the table we picked Cinebench R23 to benchmark. We’ll be focusing on the CPU Multi Core benchmark as Adaptive Boost technology works between 3-8 cores are being used. Benchmarking processors on Intel platforms is becoming pretty tricky these days. We ran our tests with the BIOS configured four different ways be enabling and disabling features like Adaptive Boost Technology, ASUS MultiCore Enhancement and enforcing all Intel limits. 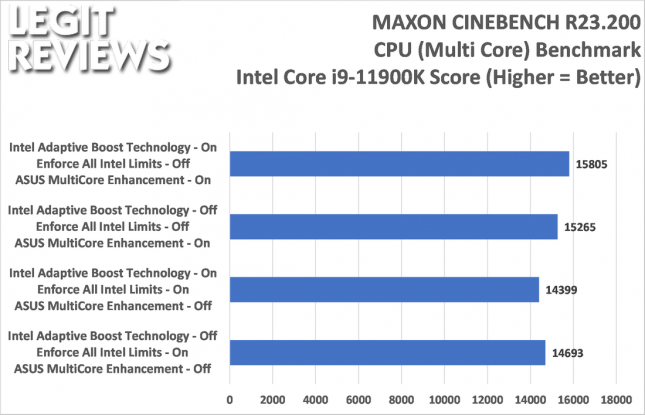 The results were scores ranging between 14,399 points to 15,805 points on the Intel Core i9-11900K processor. The worst score was oddly enough with Intel Adaptive Boost Technology enabled and with the ASUS MultiCore Enhancement (MCE) set to enforce all Intel limits. By enabling both ASUS MCE and Intel Adaptive Boost Technology the score improved by 9.8%. This is a massive performance difference. If you enable just ASUS MCE and ignore the Intel limits the score was 15,265. Enabling Adaptive Boost helped lift the performance numbers by about 3.5% over this popular setting. 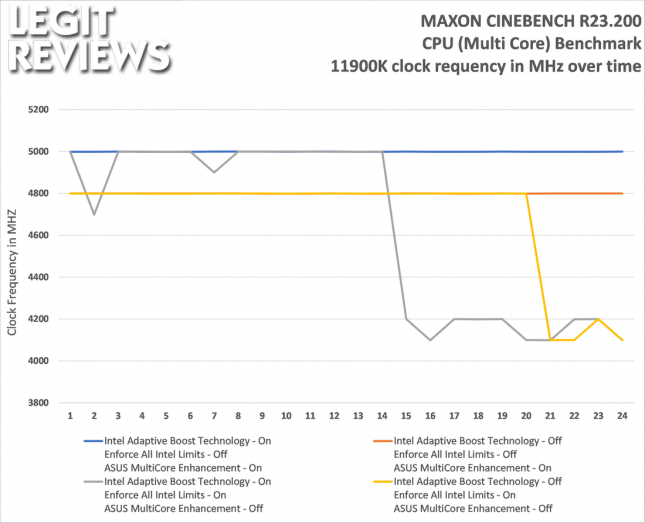 We recorded the clock frequency over time to a log at a polling rate of 2 seconds and charted each run for you. Enabling ASUS MCE alone showed that we ran Cinebench R23 at 4.8GHz for the entirety of the benchmark run. Enabling Intel Adaptive Boost Technology in addition to ASUS MCE had us running at 5.0 GHz for the entire run. If you run ASUS MCE or Intel Adaptive Boost with the Intel limits being enforced the clock speeds will eventually drop down to around 4.1GHz due to the Tau state parameters that are being strictly enforced.

How Much Power Does Enabling Adaptive Boost Use? 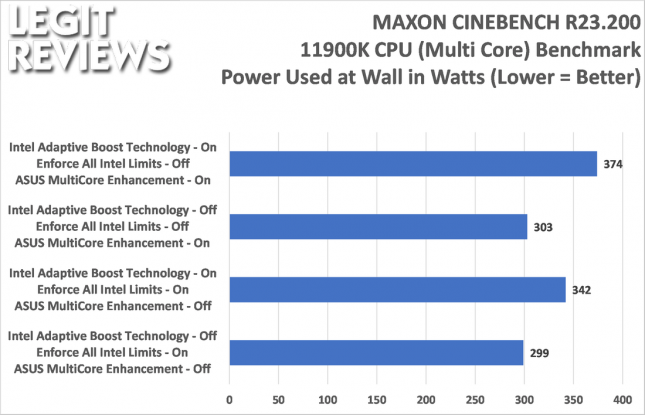 When it comes to peak power consumption at the wall we found that our entire system was topping out at 300 Watts with the Intel limits being enforced. Once we lifted that limitation the power consumption went up be nearly 75 Watts with Adaptive Boost and ASUS MCE enabled. So, you are enabling these features will have you using as much as 25% more power for would could be 8-10% performance gains depending what setting configuration you are looking at. 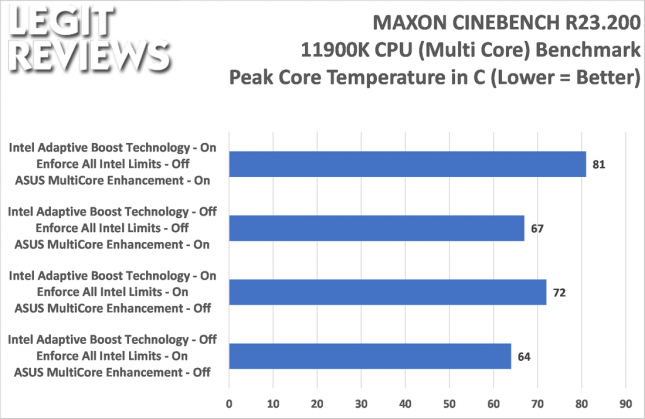 When it comes to CPU temperatures we are showing the peak core temperature on any given core during our benchmark runs. Here we topped out at 64C with Intel limits being enforced at then 81C with the Intel limits ignored with Adaptive Boost and ASUS MCE enabled. This shows we were about 26.5% hotter and that lines up pretty well with the 25% additional power that we are using. Keep in mind that we are using the Corsair iCUE H150i Elite Capellix 360mm liquid CPU cooler that runs $189.99 shipped at places like Amazon. This is a pretty beefy cooler and this benchmark runs in under 60 seconds, so good cooling is a must if plan on running long workloads and want to use this feature. 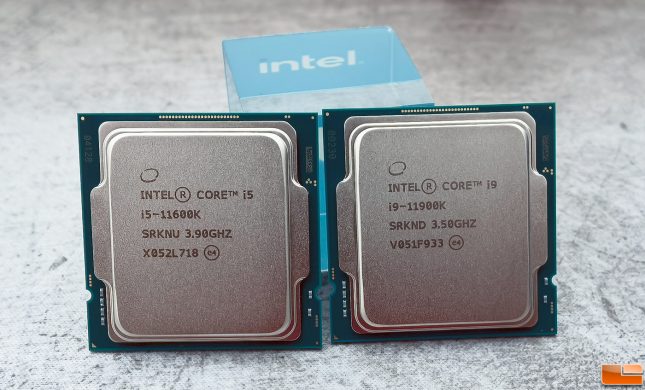 There are now a handful of ways that you can benchmark processors. If you enjoy looking at benchmark results you’ll need to pay close attention on how the system was setup. Comparing numbers from one site that doesn’t enable features such as Adaptive Boost and ASUS MCE to another that does will not be a good thing. How should review sites benchmark the new Intel processors to compare them against AMD Ryzen? Features like Intel Adaptive Boost are disabled, so would it be fair to enable it for reviews? We’ve seen arguments leaning each way and for now we are going to leave it off. We’ve been testing with Intel limits being enforced for years and will continue to do so.

The good news is that this is not considered overclocking by Intel and will not VOID or impact your CPU warranty. The negatives to enabling these technologies is that your system will consume more power and run hotter. You’ll want to ensure that you have a good CPU cooler that keeps you below the thermal threshold of 100C!