If I pay the most I get the best right?

Legit Reviews has been looking at a lot of power supplies lately and feedback from our readers show that they are greatly concerned with cost. I consistently get asked what power supply is the best for the money and to be quite honest I don’t know how to answer that and I’ll show you why I can’t.  If you aren’t a frequent reader of Legit Reviews I highly advise you to stop reading and look back at the past few power supply articles that I have written over the past month and a half.

I have taken the nine power supplies that I have been using in my articles and looked up their retail pricing, as of August 2nd, to try and figure out how power supplies are generally priced.  I often do this on the site, but rarely show the results publicly as it’s usually boring and something that many consumers don’t look at. The reason I posted the following information is because the old method of paying more doesn’t mean you get the best product on the market.  Actually based on our charts if you pay the most you get one of the least efficient power supplies, with a middle of the road total power rating and combined +12V rating.

Right now the most important feature to me personally is the efficiency of the power supply.  I want a power supply that has rock solid rails yet still has features like Active Power Factor Correction (PFC) to ensure the power supply is at least 80% efficient under full load. Active PFC increases the manufacturing costs of a power supply as well as the weight of the unit (shipping costs), so I thought a great place to start looking into pricing was efficiency — that was a mistake. 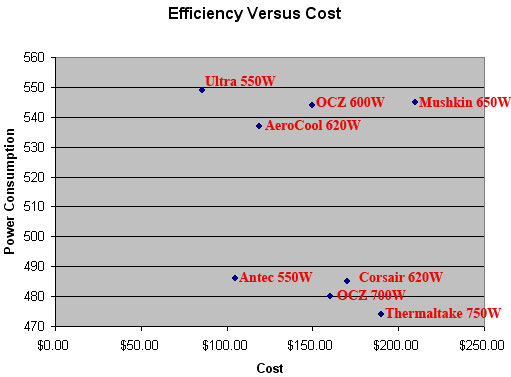 When comparing the total power consumption of our test system under load to the prices of the models it was clear that it really didn’t mean anything in terms of pricing.  In the above chart you want to be in the bottom left corner as that means the power supply costs the least and consumes the lowest amount of power showing better efficiency.  The Ultra X-2 550W power supply consumes the most energy and is also the cheapes. It looks like we were onto something until we saw the Mushkin XP-650 power supply. It costs the most and consumes the second most out of the entire group. The Antec NeoHE 550 is the best power supply of the bunch when it comes to just cost versus efficiency. When we first used the Antec NeoHE 550 it was only $89.99, but just recently the priced was increased to $104.99. We contacted Antec on the price hike and they informed us through e-mail that the price increase was because steel went up as did transportation costs. Even with the price increase the Antec Neo HE 550 is a bargin.

It’s obvious power supply pricing has nothing to do with efficiency, so let’s take a look at the total power rating in Watts.

Now this chart is looking like we are onto something!  Pricing generally increases as the total power rating of the unit increases. Once again the Mushkin XP-650 is priced away from the others on it’s own imaginary price line.

The last thing we looked at was the total combined Amps on the +12V rails.  Here we were again onto something at the pricing seemed to follow a trend line right in the middle of the data points.  The Ultra X-2 Connect 550W and the Antec NeoHE 550W were priced a bit lower than others in their class, while the Mushkin XP-650 was again priced much greater than the others close to it’s combined +12V rating.