Battlefield 3 sold 5 million copies in the first week of its release back in 2011 and received critical acclaim from most game reviewers. If you missed the boat three years ago, you are being given a second chance. Until next Tuesday, Battlefield 3 will be downloadable for free as part of Origin’s “On the House” promotion. Electronic Arts unveiled “On the House” in March with a Dead Space giveaway and it appears to be back! 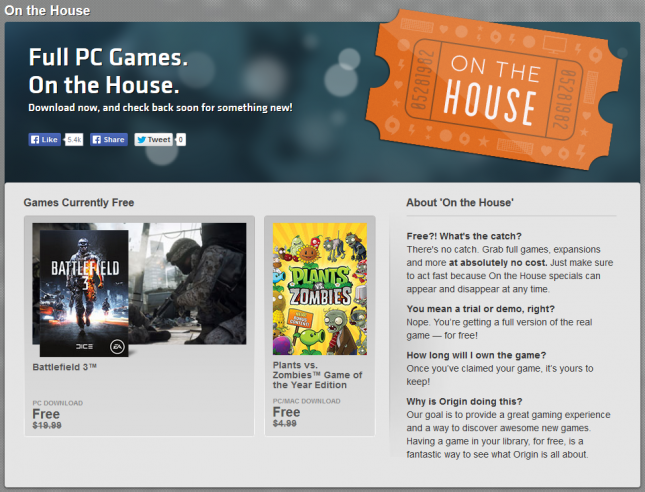 All you have to do is head to BF3‘s Origin listing and click the large orange “Get It Now” button.  Even if you’re not ready to download it yet, just add it to you Origin game library. Once you do that it’s all yours for keeps and you can install it whenever you want. The offer will expire on June 3 at 10:00 AM, Pacific Time, after which BF3 will go back to its original price of $19.99.

In addition to BF3, Origin is also offering Plants vs. Zombies GOTY Edition for free as part of the “On the House” program. Those normally sell for $4.99, so the discount isn’t as steep. Still, a freebie’s a freebie—and this offer runs until June 16.