BasemarkGPU was introduced back in 2018 as a free multi-platform, multi-API 3D graphics benchmark. The benchmark was written in C++ and developed using their own in-house game engine called Rocksolid. The desktop version runs an AAA quality game-like workload as each scene has tens of thousands of individual draw calls per frame. The nice thing about this benchmark is that you can choose to run graphics APIs like Vulkan, DirectX 12 or OpenGL. 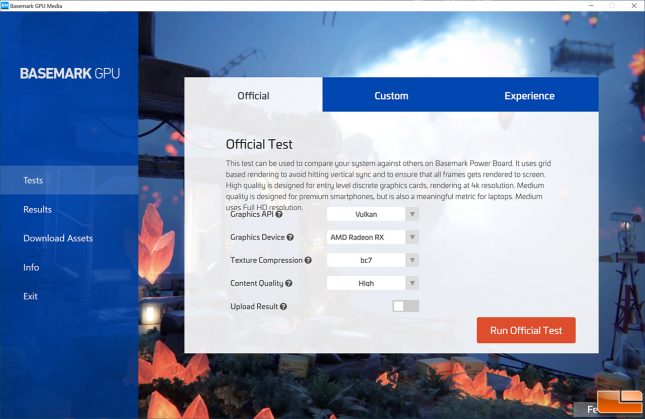 The options for Basemark GPU are simple to understand and the benchmark takes just 30 seconds to run, which is rather quick if you ask us. Most graphics cards these days have a boost clock that increases GPU clock speeds until the graphics card hits its predetermined power target or limiting factor. The card dynamically adjusts its clock speed to stay within parameters, so a 30 second benchmark will likely have all cards being tested running at near peak clocks for the entire duration as heat will not be an issue. 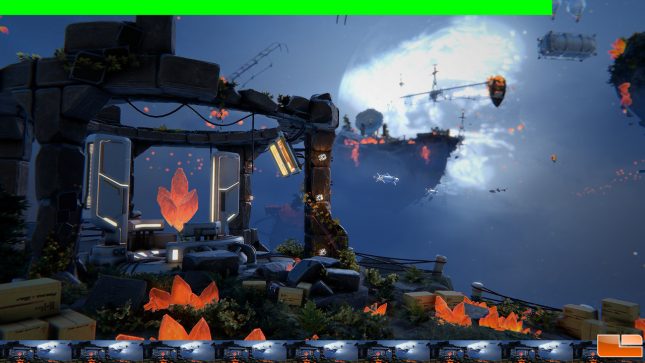 1) There are a number of synthetic benchmark utilities for graphics cards on the market. What makes Basemark GPU different?

GPU 1.2 is the only cross platform, cross API benchmark in the market. It enables objective comparison of devices using different OS and graphics APIs.

We also target to do same shaders/effects as what AAA video-games, just without run-to-run variance. This is more realistic use case than from some purely-synthetic how many triangles are rendered

2) You use your own Rocksolid game engine for this benchmark. Will this provide meaningful results for those reading reviews seeking information before they purchase their next graphics card?

Yes, it does. Rocksolid Graphics Engine is highly optimized graphics solution. We are licensing the engine also as a stand-alone solution to various segments.

3) This benchmark runs very quickly. Does the short nature of this accurately show the performance of the card being tested?

According to unanimous feedback from partners in our BDP program, it does. Also, based on our own in-house testing, GPU 1.2 shows accurately the performance of the card being tested. Test variability is within the designed bounds.

4) How many CPU threads is the benchmark coded to use? (curious on multi-threaded call usage and is it the same for each API)

OpenGL is limited to single thread due to API limitations. Other APIs are splitting work to as many core as there is on system to record commands but there is still only one “work submit” call per frame. (Discrete GPUs would support using multi-threaded submit, but integrated/mobile not. So this is to keep behaviour the same across vendors.)

5) Have you taken development money from any corporations?

Our business model is such that we license our benchmarks to corporations and give free-of-charge versions for IT Media and consumers. Most of the major semiconductor vendors and many of the largest OEMs in the market are participating in Basemark Benchmark Development Program. Its a single tier program that enables the companies to review our development versions of the benchmarks in development and give feedback. Just as all the other benchmark development programs out there do. Collectively, this revenue covers our development costs.

6) Do you feel like Basemark GPU 1.2 is an unbiased benchmark?

Yes, absolutely. Our objective is always to provide objective, unbiased benchmarks. In the BDP agreements, we and the corporations agree that Basemark has full authority for the benchmark design and implementation, i.e. there are no veto rights. As you may know, our founder Tero Sarkkinen has over 20 year track record in the benchmark industry of making objective benchmarks.

7) Do you have any future plans that you can talk about regarding Basemark GPU?

Basemark GPU will support also Mac with Apple Silicon is the very near future. We are also building the next generation benchmark GPUScore. It will be available before the end of the year. Stay tuned!

How We Used Basemark For Testing Desktop Graphics Cards

For our testing we used Basemark at the default settings, which are high quality image settings along with the texture compression set to block compression (BC7). We ran 12 difference graphics cards from both NVIDIA and AMD. All of the cards were either Founders Edition or reference models and the clock speeds were left stock. 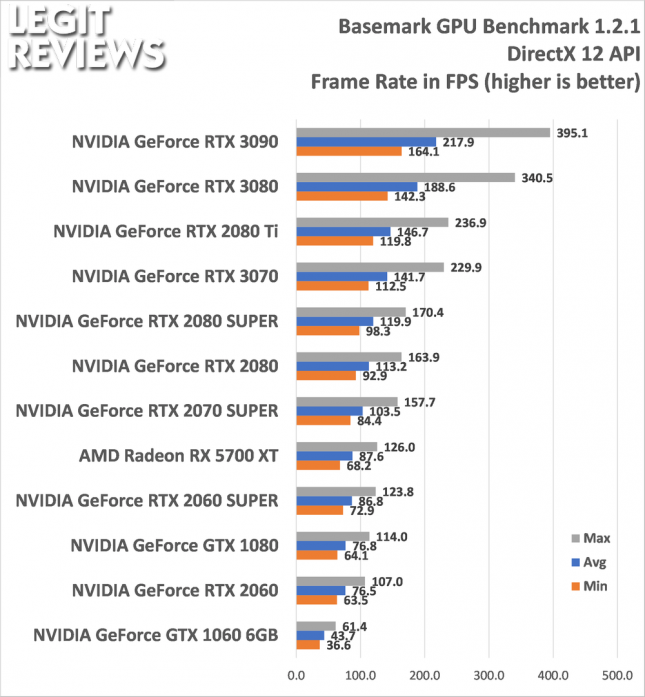 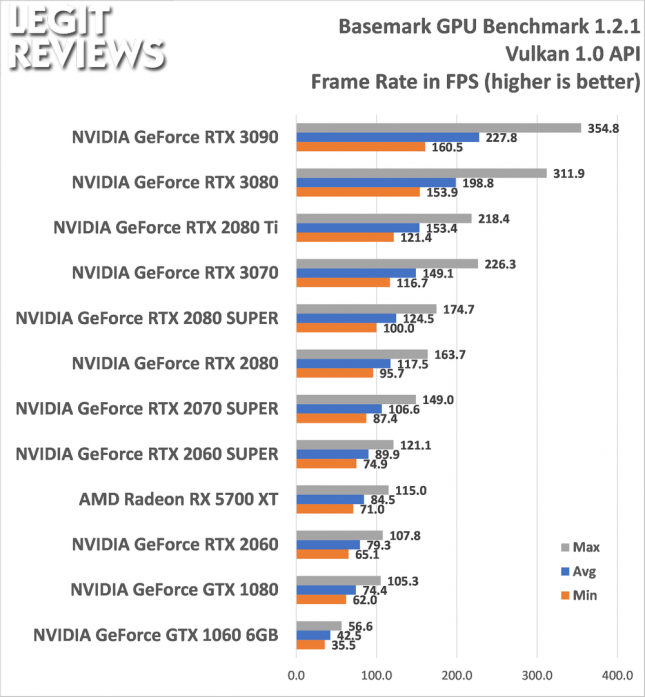 If you are looking for a GPU benchmark to run that is free to download and use we feel that Basemark GPU is worth trying out. It allows you to quickly measure GPU performance using multiple APIs. The user interface is simple to use and the results are given as an overall score or the actual frame rates. We tested Vulkan and DirectX 12 and showed the frame rates as those results are most relevant to our audience!

You can download Basemark GPU 1.2.1 directly from the Basemark product page if you wanted to give it a try. We’ll likely be adding this benchmark into our GPU test suite in the weeks ahead. We also can’t wait to see how the AMD ‘Big Navi’ parts perform later this month as the initial numbers from AMD look really good on the Radeon RX 6800 XT and Radeon RX 6800 graphics cards!