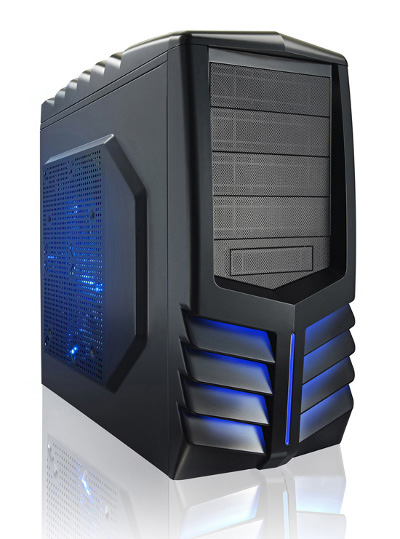 Azza is not an unfamiliar face around these parts. We here at Legit Reviews have had a look at a number of Azza’s Mid-range and High End cases. Most recently, we looked at the Hurricane 2000 Full Tower from Azza, and aside from a few minor complaints, it was an overall good product. While some AZZA cases have aggressive styling like the Toledo 301 and Hurricane 200, the Solano 1000 & Helios 910 both have more subtle design elements showing Azza is not just a one trick pony.

Today we’ll be looking at the Toledo 301 which is a budget friendly case designed for gamers with a side mounted 230mm fan designed to cool off even the hottest graphics cards on the market like the AMD Radeon HD 6990 and NVIDIA GeForce GTX 590.

Azza has a few words to say about the Toledo 301’s design principle:

The AZZA Toledo 301 should end your unremitting compromise between value
and budget! With performance, features, and quality found only in
high-end cases, designed with an eye-catching exterior, AZZA invites you
to build your next power rig with its Toledo 301.

Currently, the AZZA Toledo 301 comes in with a 1 Year Warranty at $69.99 with free shipping from Amazon.