Fans of German performance cars will appreciate the teaser that Audi is giving for the 2022 Audi RS 3. The car will be launching before you know it, but some of the car’s details have been announced ahead of that launch. Power will come from a turbo 2.5-liter five-cylinder engine.

It produces 401 horsepower and 369 pound-feet of torque. Both numbers are modest gains from the 2021 version of the car. It will continue using a seven-speed dual-clutch automatic and feature all-wheel drive. The car will hit 62 mph in 3.8 seconds. 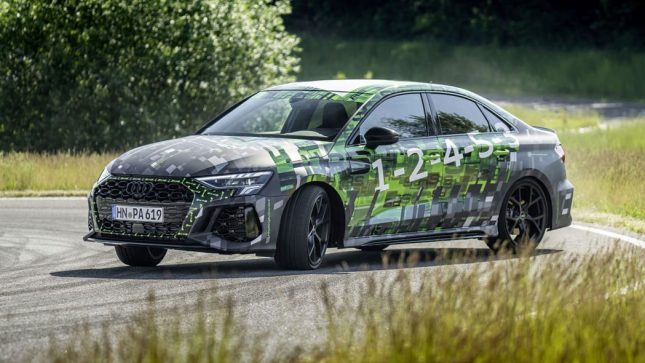 If fitted with the available RS Dynamic Package with carbon-ceramic brakes, the car has a top speed of 180 mph. Audi has also integrated a rear differential that has a pair of clutch packs for each rear axle, allowing it to perform active torque-vectoring. Up to 100 percent of the rear torque can be sent to either wheel to improve traction.

Audi has included an RS Torque Rear driving mode that sends more torque to the rear, but the exact split is unknown. That driving mode should mean that smoking burnouts and drifts are much easier than in past versions. Other details on the 2022 RS 3, including pricing and availability, will be announced closer to launch.