Today ATI shows off their first enthusiast-based chipset for the AMD K8 series processors.  Officially it will be known as the ATI Radeon XPRESS 200 series chipset.  Many rumors have been floating around about the RS480 and RX480 chipsets, but from here on out they will be known by their official names — the 200 and 200P. 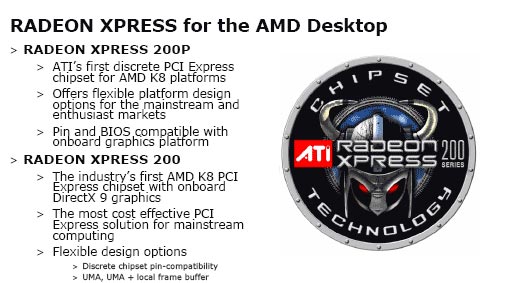 The 200 series having integrated graphics and the 200P is for discrete graphics solutions.  If you were looking forward to seeing AGP slots so you can run discrete graphics on these boards don’t hold your breath as these are PCI Express only boards.  Now that we know ATI is making motherboard chipsets and that these chipsets are called the 200 and 200P let’s take a look and see what ATI has to offer with the ATI XPRESS 200.

From the north bridge you’ll notice either an x16 PCIe slot for a discrete graphics solution or a DVO on-board video connector for the XPRESS 200 chipset. The ATI HyperMemory feature, as well as four extra x1 PCI-express lanes, are provided through the north bridge, this will allow mobo vendors to add dedicated video memory to their board for use with the on-board video of the XPRESS 200 chipset.

The south bridge offers the typical array of features, including support for AC97 audio, eight USB 2.0 channels, SATA and PATA, and standard PCI slots.  The ATI chipset supports 4 SATA channels and 2 PATA channels for a maximum of eight devices.  While RAID 0 and 1 are supported, curiously RAID 0+1 is not. All in all nothing too earth shattering or different, other than the integrated graphics. 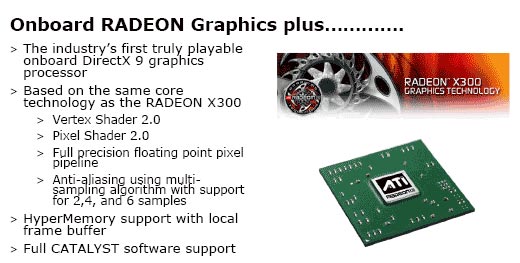 The DirextX 9 graphics core has support for Vertex Shader 2.0, Pixel Shader 2.0 as well as having a full precision floating point pixel pipeline.  HyperMemory support allows motherboard designers to implement a local frame buffer for the core instead of using shared memory from the system.  The HyperMemory support uses an on board 16mb Samsung memory IC for better video performance. ATI says the IGP should offer performance comparable to a four-pipe Radeon X300 card with 64MB of memory. The Radeon XPRESS 200 series chipset supports either dual or single channel memory solutions, this means that both 754-pin and 939-pin processors are supported. 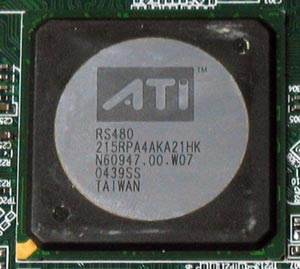 So, now that you know the specifics, lets take a look at the Radeon XPRESS 200 reference board.  Then, we can take a look and see how the series stacks up against its competition. Can ATI’s newest product find a market in an age of extreme graphics cards and system abusing games, or are IGPs a feature whose time has come and gone? Read on to find out!