The ATI Radeon X1950 Pro, codenamed RV570, has been built on the 80nm process, contains 36 pixel shader engines, 12 parallel pipelines and eight vertex engines, utilizes digital PWM, supports dongle-less CrossFire, fits in a single PCIe slot and comes with an MSRP of $199. When the AMD/ATI merger was announced many critics and analysts thought that ATI would be too busy merging with AMD to keep producing quality products for the high end graphics market, but it’s safe to say that with today’s successful launch ATI has cast away those worries. 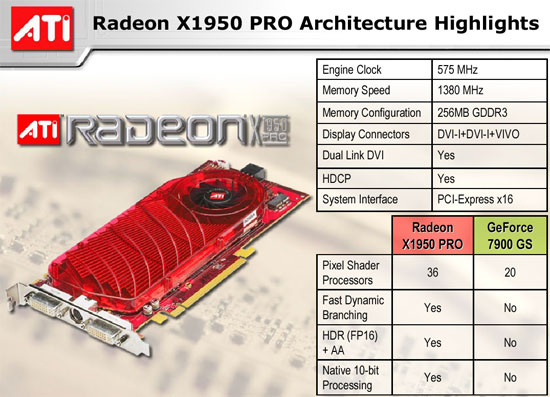 ATI has clocked the core on the X1950 Pro at 575MHz and the 256MB of GDDR3 memory at 1.38GHz, which are aggressive for a card with a $199 price tag. The core on the X1950 PRO is manufactured on an 80nm fabrication process, and is completely separate in almost every way imaginable from the existing Radeon X1950 video cards as we will show you later in this article. ATI has been impressed by the cores made on the 80nm process and told Legit Reviews that the average overclock on the core has been 100MHz from what they have seen and been hearing back from those that are lucky enough to have a card already. 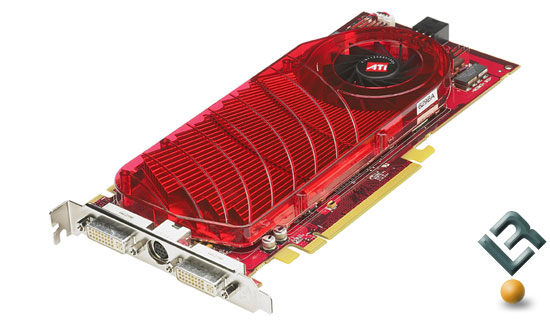 The 80nm RV570 core features 36 Pixel Shaders (12 fewer than the X1950XTX) and 12 Texture Units (four less than the X195XTX) to get the job done. Video output options include dual-link DVI + S-Video, dual-link DVI + single link-DVI + S-video or dual-link DVI + VGA + S-video. The ATI Radeon X1950 Pro has internal dual-link TMDS transmitters for both DVI outputs. As usual, ATI doesn’t recommend any particular configuration and it is up to the add-in board partner to choose the appropriate one.