The Nvidia Versus ATI Marketing Battle Lives On

After posting our GeForce 7600 GS Preview article Legit Reviews was contact by both ATI and NVIDIA within hours of the article being posted.  While one company was happy with the coverage the other was not.  No big news here as when doing a performance battle one has to be the loser (unless they tie) and no one likes to be second place.  After all second place is really the first loser and when it comes to the mainstream market neither company wants to look bad as these are the cards that sell off the shelves of local retailers.

ATI contacted Legit Reviews and expressed their concern the benchmark numbers specifically. ATI sent us a chart where they ran the NVIDIA GeForce 7600 GS against the ATI X1600 XT and came up with very different results than what NVIDIA showed us from their testing results. Let’s take a look at the NVIDA chart from yesterday: 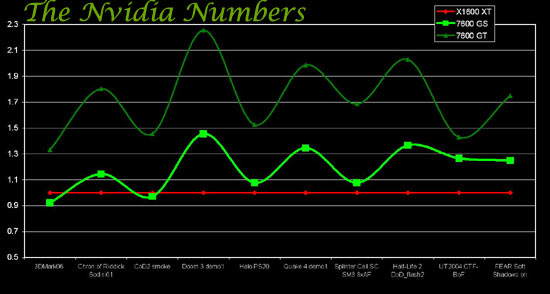 The NVIDIA chart was originally larger and had to be shrunk down to fit on our site.  To see the original chart click here. NVIDIA informed us that all benchmarks were run at 16×12 on an AMD FX57 platform with NVIDIA 84.17 & Cat6.2 drivers. It shows the GeForce 7600 GS performing better in everything, but 3DMark06 and Call of Duty 2. Now let’s take a look at the numbers that ATI sent Legit Reviews yesterday: 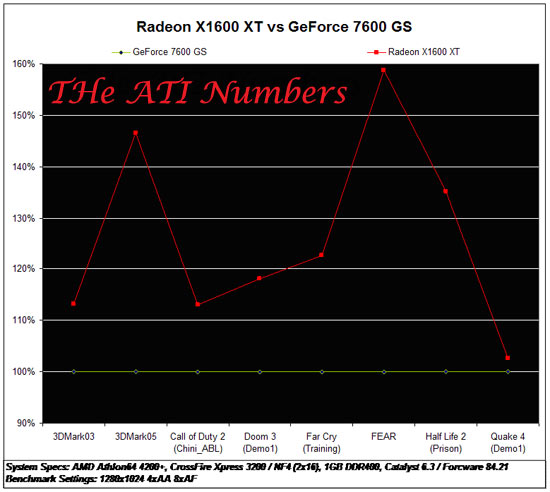 The ATI numbers show ATI leading in every benchmark that they ran. Sadly all these tests were completed using different drivers, motherboards, and video card settings. ATI tested at 1280×1024 with 4xAA & 8xAF enabled while the NVIDA numbers were ran at 1600×1200 with the other video card settings being unknown to Legit Reviews. We also know the video card clock speeds on the ATI benchmarks the ATI X1600 XT was run at 587MHz Core and 693MHz memory, which the 7600 GS was run at 400MHz core and 400MHz memory.  Back in our ATI X1000 Series Video Card Roundup we find that the X1600 XT came rated at 590MHz/1.38GHz, so the ATI benchmark ran both cards at their original clock ratings.

When a product isn’t on the retail market or the numbers are not our own it is considered a preview.  When I was in college getting my Bachelor of Science in Biology one of the first things I learned when it came research is that you can set up the experiment to get the outcome you want.  The numbers from ATI and NVIDIA should be looked at in that sense and is the reason review sites like Legit Reviews remain a staple in our enthusiast community.  We don’t get involved in the public relation battles between ATI and NVIDIA, we just show you which cards perform better in our own benchmarking.  The entire staff of Legit Reviews are gamers and we know what’s going on here!

Our friends over at XFX overnight mailed us their GeForce 7600 GS solution and we already have a number of ATI X1600 XT video cards in house.  It looks like Legit Reviews will be benchmarking these two cards ourselves and it should be interesting to see how they do when compared to their internal testing.

In closing keep in mind the pricing on these cards.  Newegg has the XFX GeForce 7600 Extreme Edition priced at $143 and the card is in stock. The cheapest ATI X1600 XT video card at Newegg is the Sapphire X1600 XT and it is priced at $150 with a $15 rebate bringing the card down to $135.  To us it is clear that these two cards are in the same price brackets! Expect an article with our own benchmarks and thoughts next week.

What do you think about this whole situation?  We want to hear your thoughts on our forums! Sound off on this thread to be heard.