This year marks the 10th anniversary of the world-renowned ROG brand. ROG is committed to producing innovative PC hardware that delivers the ultimate computing experience for gamers and enthusiasts. The brand’s dedication to pushing the boundaries of design and engineering has given gamers cutting-edge motherboards, graphics cards, notebooks, desktops, monitors, sound cards, and peripherals that stand out from the rest of the crowd.

The ROG Maximus VIII Formula is a Z170-based ATX gaming motherboard with an innovative cooling design that uses an exclusive CrossChill EK water block to cool its VRMs. ROG teamed up with EK Water Blocks to develop a custom solution with a high-conductivity copper channel for quiet and cool operation with air- or liquid-cooled builds. During internal testing with a liquid cooling system, the CrossChill EK reduced MOSFET temperatures by up to 23°C.

The Maximus VIII Formula features all-new Aura LED illumination and durable, laser-engraved ROG Armor. Onboard LEDs combine with a header for standard RGB strips to let users illuminate their systems like never before. Customizable Aura effects include breathing, strobing, and color-cycling modes. The lighting can also pulsate to the beat of your favorite music or change color based on the CPU temperature. 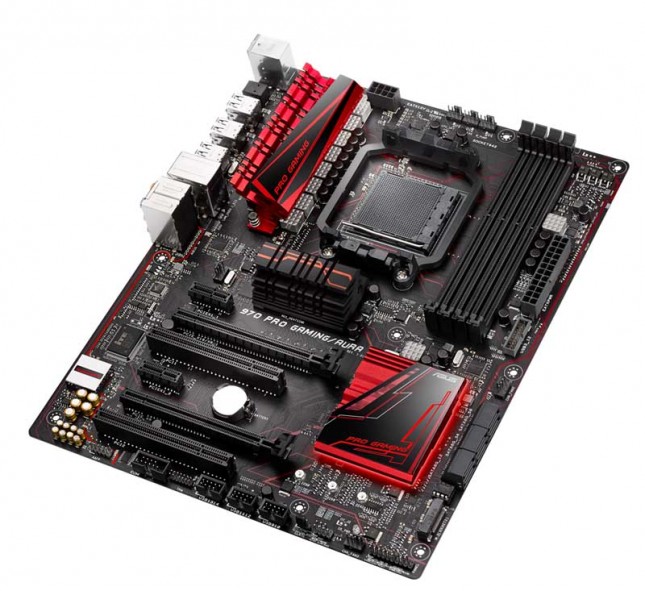 Based on the AMD® 970+SB950 chipset, the ASUS 970 Pro Gaming/Aura is the world’s first AMD 970 motherboard certified by NVIDIA to offer SLI support. It features Aura RGB LEDs for customizable lighting, SupremeFX and Sonic Radar II audio for precise in-game sound, and Intel Gigabit Ethernet with ASUS LANGuard and GameFirst technologies for fast, safe, and lag-free networking. The ASUS 970 Pro Gaming/Aura also has a dedicated water-pump header and dual USB 3.1 ports. It even supports M.2 SSDs based on the NVM Express protocol.

The ROG GT51, winner of a 2016 CES Innovation Award in the Gaming and Virtual Reality category, is powered by a 6th-generation Intel Core i7-6700K processor and up to two NVIDIA GeForce GTX TITAN X graphics cards in SLI. ROG Turbo Gear lets users maximize the GT51’s overclocking potential with just one click, while the ASUS-exclusive Aegis II application helps monitor system parameters. In addition, a USB 3.1 Type-C port on the front panel pushes transfer rates up to 10Gbps and can quick-charge mobile devices. The GT51 also features the exclusive ROG Band, which lets users overclock the system or activate Shadow Drive, a hidden portion of the hard drive.

The GT51 has an internal cooling system with a dedicated air tunnel that takes advantage of natural convection to efficiently manage heat during marathon gaming sessions. It has an aggressively designed ATX chassis with an Armor Titanium and Plasma Copper finish, a transparent side window, and customizable lighting effects with up to eight million colors.

The ROG XG Station 2 is an external graphics card docking station specially designed for ASUS laptops and graphics cards. It has a custom interface that lets notebooks harness the power of desktop graphics cards to significantly boost gaming performance. This docking station also helps charge the laptop, so users don’t have to carry the latter’s power adapter. It’s easy to hook up, as well, and it can be unplugged without restarting the laptop. 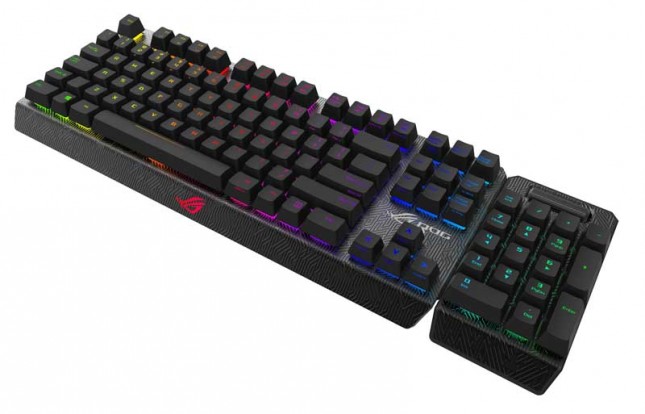 The ROG Claymore is a gaming keyboard with Cherry MX RGB mechanical switches and a detachable, macro-infused numpad to give users flexible placement options. This backlit keyboard features customizable keys with RGB lighting and N-key rollover technology. It can be synced to ROG motherboards, with hotkeys allowing users to control fan speeds, boot up, overclocking, and BIOS access. The ROG Claymore has a durable aluminum-alloy frame with Mayan-inspired detailing for a premium look. 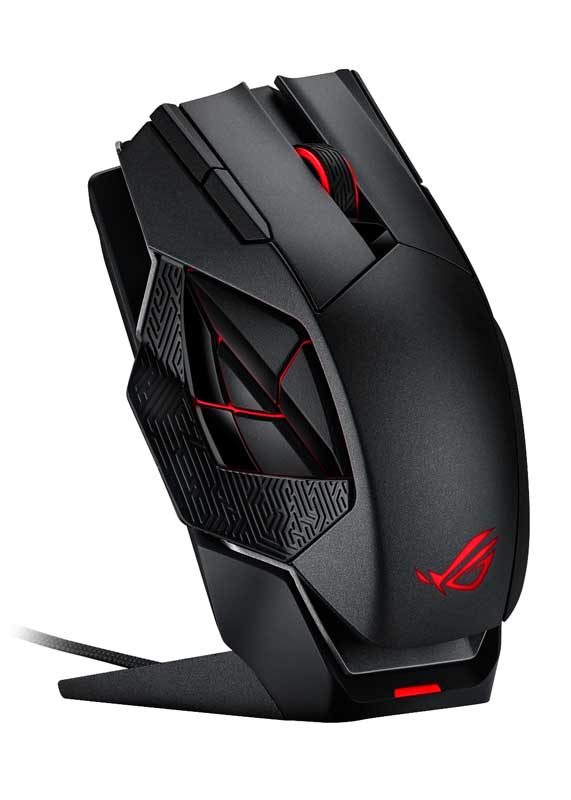 The soon-to-be-released ROG Spatha is an 8200-DPI laser gaming mouse crafted for MMO glory. It has a magnesium-alloy chassis and features a total of 12 programmable buttons, including six ergonomic thumb buttons. The left and right buttons have a socketed design that lets users easily swap switches to customize the click feel. Out of the box, the sockets are populated with Omron® switches rated for a 20-million-click lifespan. Users have the freedom to use the mouse in wired or wireless modes, and they can enjoy polling rates up to 2000Hz in wired mode. In addition, the Spatha has customizable RGB LED effects across three zones. 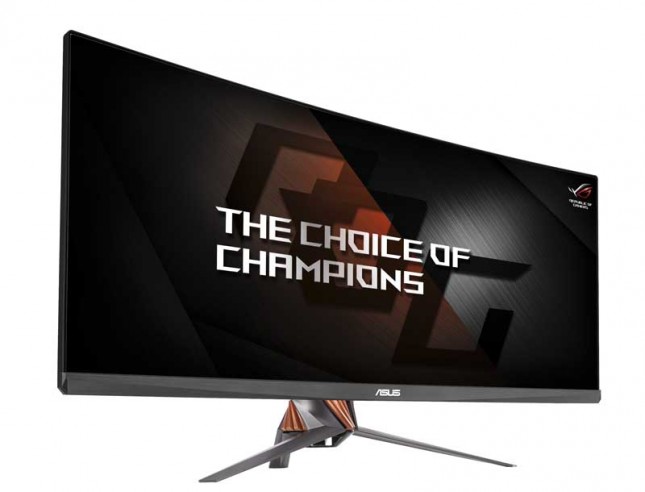 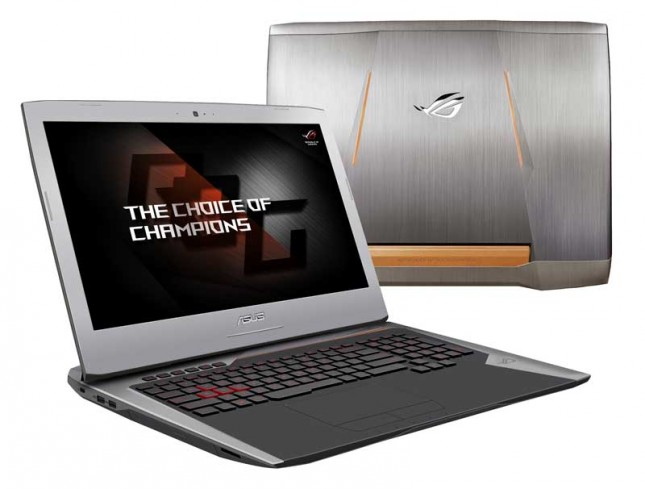 The ROG G752 is a powerful gaming laptop powered by a 6th-generation Intel Core i7 (‘Skylake’) processor and up to NVIDIA GeForce GTX 980M discrete graphics. The G752 has an aggressive design and sports the new ROG Armor Titanium and Plasma Copper color scheme. It features the ROG-exclusive mobile 3D Vapor Chamber thermal system for more efficient cooling and increased stability, along with a backlit anti-ghosting gaming keyboard with 30-key rollover for precise input. The G752 also uses NVIDIA G-SYNC technology to smooth out frame delivery and eliminate tearing.

ASUS is a worldwide top-three consumer notebook vendor and maker of the world’s best-selling, most award-winning motherboards. A leading enterprise in the new digital era, ASUS designs and manufactures products that perfectly meet the needs of today’s digital home and office, with a broad portfolio that includes motherboards, graphics cards, optical drives, displays, desktop and all-in-one PCs, notebooks, netbooks, servers, multimedia devices, wireless solutions, networking devices, tablets, smartphones and wearables. Driven by innovation and committed to quality, ASUS won 4,326 awards in 2014 and is widely credited with revolutionizing the PC industry with its Eee PC™. ASUS has more than 16,000 employees around the globe with a world-class R&D team of 5,200 engineers. Company revenue for 2014 was approximately US$14.5 billion.