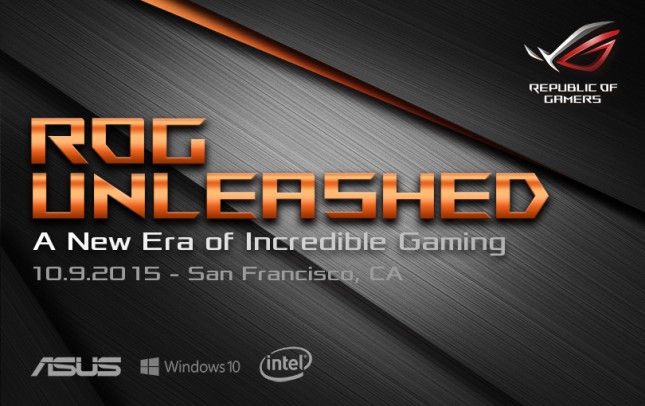 “In the last decade, our dedication to superior design and engineering has allowed us to empower gamers with the most innovative products,” said Mr. Shih. “Over the next decade and those to come, we will continue this mission and push ROG forward with even more epic innovations designed for gaming domination.”

ROG systems and components are designed and engineered to the highest standards along with thorough feedback from the community of ROG fans and users. In addition to hosting the ROG Unleashed press conference, ASUS invited loyal fans to celebrate nearly a decade of ROG engineering excellence with early access to the latest systems and components before it goes on sale.

Driving the ASUS ROG notebooks and desktops is Microsofts latest Windows 10 operating system that revitalizes PC gaming with new features such as DirectX 12 technology, Game DVR, and Xbox One Game Streaming. DirectX 12 technology enables game developers to extract every ounce of computing power from ASUS ROG notebooks, desktops, and components to bring life-like visuals and smooth performance to compatible titles. The result is an incredible gaming experience unlike anything before.

Microsoft Game DVR functionality lets gamers capture video clips and screenshots while playing PC games to watch later or share on social media for everyone to see. Xbox One Game Streaming capabilities enable users to stream Xbox games, including exclusive titles such as Forza Motorsport 6, the upcoming Halo 5: Guardians, and others, directly to an ASUS ROG notebook, desktop, or system with ASUS ROG components.

The new ASUS ROG line up will enable a fantastic Windows 10 gaming experience, said Terry Myerson, executive vice president of the Windows and Devices Group, Microsoft Corp. Weve worked closely with ASUS to ensure the ROG line has optimized performance and responsiveness that PC gamers demand. I look forward to the hours of gameplay that the ROG line will enable for everyone who loves PC gaming.

Succeeding the award-winning ASUS ROG G751-series notebook is the all-new G752 that features an evolved ROG-look consisting of a titanium grey base with key accents for a clean and modern look. The new chassis houses the ASUS Mobile 3D Vapor Chamber cooling system that incorporates heat-pipes and dual fans to independently cool the CPU and GPU for maximum cooling efficiency that strikes the perfect balance of performance and noise for uninterrupted gaming marathons.

The ASUS ROG G752 series arrives in a variety of configurations powered by 6th Generation Intel Core i7 quad-core processors paired with a choice of NVIDIA GeForce GTX 965M, GTX 970M, and GTX 980M graphics processors with up to 8GB of GDDR5 video memory. NVIDIA G-SYNC technology is standard on all varieties. An anti-ghosting gaming keyboard that supports up to 30-key rollover, 2.5-mm long-travel keys, Thunderbolt 3.0 technology with USB Type-C, and up to 64GB of DDR4 RAM completes the G752 series to create one of the most future-proof gaming notebooks available.

Available for the next 24 hours as part of the celebration of nearly a decade of ROG engineering supremacy and ROG Unleashed is an exclusive pre-order bundle consisting of the ROG G752VL-DH71 and ROG Shuttle backpack for $1499.99. The ROG G752VL-DH71 features the latest 6th Generation Intel Core i7 6700HQ processor, NVIDIA GeForce GTX 965M graphics, a 17.3-inch 1080P display with NVIDIA G-SYNC technology, 16GB of DDR4 RAM, 1TB of storage and Windows 10 for an amazing gaming experience. The ROG Shuttle is the perfect backpack for gaming on-the-go and easily accommodates the G752 and accessories.

Residing within the notebook is the latest 6th Generation Intel Core i7 K-series processor thats unlocked for easier overclocking and a desktop-class NVIDIA GeForce GTX 980 graphics processor thats also overclockable and ready for next-generation gaming. A 4K IPS display with NVIDIA GSYNC technology lets gamers pick their own path to next-generation gaming 4K or VR the GX700 is ready for both. When attached to the liquid-cooling dock, the ROG GX700 delivers a high-end desktop computing experience with exceptional overclocking features and capability.

For those who desire greater pixel density, the ROG Swift PG27AQ features a UHD/4K (3840×2160) resolution into its 27-inch panel. This eight-megapixel display produces amazingly sharp images and crisp text thanks to 10-bit color reproduction that allows the PG27AQ to paint vivid visuals with a palette of 1.07 billion colors, making it ideal for not only gaming, but also photo editing and content creation.

An onboard U.2 PCI Express 3.0 x4 connector ensures the Maximus VIII Impact is ready for the latest extreme speed SSD. Network connectivity is catered for on two fronts with an onboard 2 x 2 802.11AC MU-MIMO Wi-Fi card providing high-speed wireless connectivity, while wired network connections are handled by Intel I219-V Gigabit Ethernet that provides a stable, responsive network connection for uninterrupted gaming sessions.

The Maximus VIII Impact includes ROG SupremeFX Impact III audio, which provides the finest audio quality with an ESS ES9023P DAC and headphone buffer that can drive high-impedance headphones up to 600 ohms. The onboard component layout has been tuned to prevent noise leakage into audio pathways, allowing the SupremeFX Impact III audio module to deliver a consistent, high-fidelity audio experience. 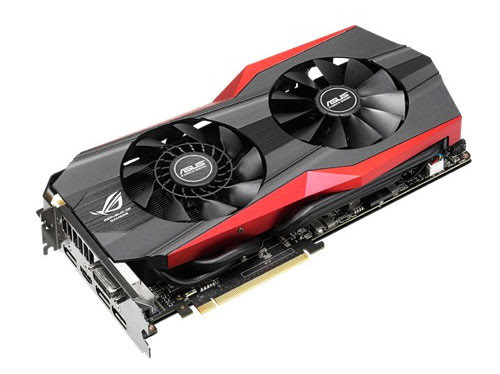 Despite using the same GeForce GTX 980 Ti GPU as other graphics cards, the ROG Matrix is an entirely different beast. ASUS tests each GPU to assess its overclocking potential and reserves only the very best for use in the ROG Matrix. Those chips are paired with a custom circuit board, power delivery, and cooling solution tuned to help you wring out every last drop of performance. The card is bursting useful extras, too, such as RGB LEDs that change color based on the workload, a defroster that prevents condensation build-up with sub-zero overclocking, and a safe-mode button that can rescue you from overly ambitious overclocks. More than just another GeForce GTX 980 Ti, the ROG Matrix is in a class all its own. 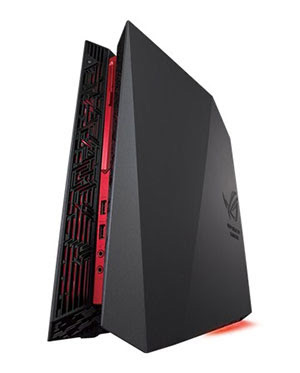 Making its global debut is the all-new ASUS RT-AC88U router, which is engineered for gamers and enthusiasts with speeds up to 2.1 Gbps on 5 GHz and 1 Gbps on 2.4 GHz for wireless network connectivity that matches and exceeds wired Ethernet performance. Wired network connectivity is available via eight Gigabit Ethernet ports to make the RT-AC88U the perfect home network router or wireless client bridge for users with multiple network-connected devices that cant be wired to the main router.

While having a fast router can help improve local network performance, online gaming depends heavily on WAN performance and efficient connections. Online games often execute an excessive number of hops to transmit and receive game data by default. To address this, the RT-AC88U features a built-in client and free subscription to the WTFast Gamer Private Network (GPN), which optimizes WAN network routes via dedicated GPN servers to ensure consistently low ping times and reduced packet loss. By incorporating this client into the RT-AC88Us firmware, gamers can access this functionality on any OS without needing to run the client on local machines.

The RT-AC88U also features ASUS AiProtection to help prevent virus, malware, and other network attacks. Placing this level of protection within the router saves users from needing to install expensive, resource-consuming anti-virus software on their PCs.

The ROG GX700, ROG Swift PG27AQ, Matrix GTX 980 Ti and RT-AC88U will ship later this quarter along with pricing information. The G752 series is available for preorder starting at $1499. The ROG Swift PG279Q is available in November with an MSRP of $799. The ROG Maximus VIII Impact motherboard ships in mid-October with an MSRP of $249. Some configurations of the ROG G20 are currently available starting at $699, while 6th Generation Intel Core-based G20CB systems will arrive later this year.

ASUS is a worldwide top-three consumer notebook vendor and maker of the worlds best-selling, most award-winning motherboards. A leading enterprise in the new digital era, ASUS designs and manufactures products that perfectly meet the needs of todays digital home and office, with a broad portfolio that includes motherboards, graphics cards, optical drives, displays, desktop and all-in-one PCs, notebooks, netbooks, servers, multimedia devices, wireless solutions, networking devices, tablets and smartphones. Driven by innovation and committed to quality, ASUS won 4,326 awards in 2014 and is widely credited with revolutionizing the PC industry with its Eee PC. ASUS has more than 13,600 employees around the globe with a world-class R&D team of 4,500 engineers. Company revenue for 2014 was approximately US$14.5 billion.