Recently, a ton of websites around the web have been showing off pictures of the upcoming ASUS P7P55D EVO motherboard that will be released in conjunction with Intel Core i5 processors down the road. The sad thing is that many news and review sites are showing old prototype P7P55D EVO motherboard images. Since we do old school journalism here at Legit Reviews, where we actually talk to the companies to make sure our information is correct and accurate before posting it on the web, we have some new information for our readers that you might not have seen yet. We were able to get in touch with ASUS Taiwan this morning and were able to land a pair of photos that show the ASUS P7P55D EVO motherboard including the new southbridge heatsink and have received news that the Marvell SATA 6G controller has been removed.

Here is a quick background on the Intel P55 Express and the P7P55D EVO for those that are seeing it for the first time.

The P7P55D ‘EVO’ motherboard is based on Intel’s LGA1156 socket designed for Intel Lynnfield Processors or Core i5, so this is a whole new socket for a new generation of processors that will be coming out soon. To our knowledge the P55 Express chipset will no longer feature a QPI bus (Quick Path Interconnect) and therefore has no Northbridge, which will likely have an impact on performance when compared to the Intel X58 Express chipset. Also missing is triple channel DDR3, which was replaced by dual channel DDR3. This is good news as it will lower system costs, and it is good for those upgrading from previous generation DDR3 platforms like the X38/X48 as they might be able to continue using the same memory kit if they like. The biggest negative that we can see with the P55 chipset is that Intel has restricted the bandwidth of the x16 PCI express to 8 lanes. This is significant if you plan on running a multi-GPU setup like NVIDIA SLI or ATI CrossFire. For the average consumer that runs just one video card this shouldn’t be a big deal as the full benefits of PCIe 2.0 with 16 lanes is available when one card is being used. When two video cards are being used the full 16 lanes is split between two PCIe slots (x8 + x8). It’s not official and/or public that NVIDIA SLI will be supported on the P55 chipset, but we think it’s highly likely that it will be. ATI CrossFire is, of course, supported again, so no worries there. 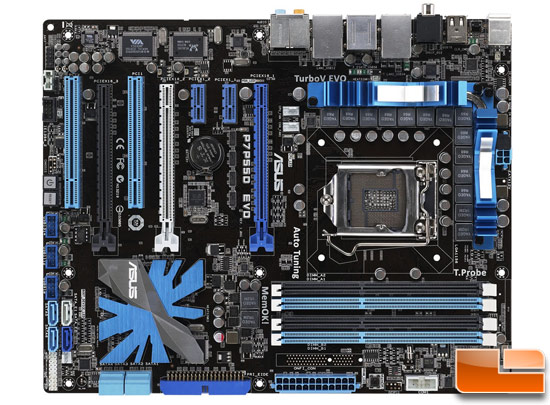 The P7P55D ‘EVO’ motherboard pictured above is based off the most recent revision and was sent to Legit Reviews just hours ago. The color scheme has been updated and I/O ports have been updated as well to include External SATA (eSATA). It should also be noted that SATA6G is not present anymore due to Marvell limitations (yield and other issues of the Marvell controller are to blame according to our sources in Taiwan). As a result, the SATA color scheme has been adjusted. Due to the Marvell yield issue SATA6G was removed from the EVO and also all of ASUS’ P55 mass production boards. The only board that will ship with SATA6G support now is the ASUS P55 Premium motherboard. Once Marvell gets all issues resolved in terms of yield and a few other areas ASUS will reintroduce this feature into their P55 boards. As a side note, Marvell, as well as ASUS, wanted to make it clear that SATA 6G is not SATA III as it confuses end users who may think it is SATA II/2 which has 300MB throughput. The last change on the most recent version of the board is that many of the older pictures didn’t show the Q-DIMM memory connector and the new pictures are updated to show the new design. From our quick look at these pictures that is all that we can see that has been changed. 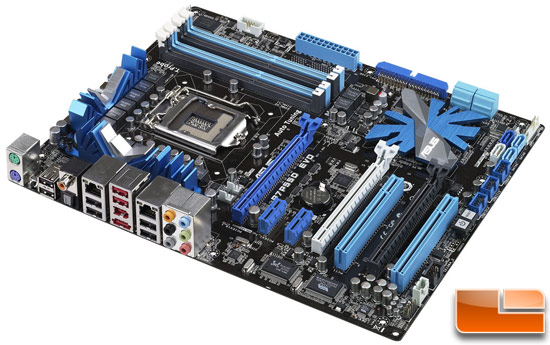 The I/O backplate area on the P7P55D ‘EVO’ motherboard looks like it has all the bells and whistles that all the current high-end X58 motherboards offer. ASUS included the legacy PS/2 ports for both keyboard and mouse, but also placed 8 USB ports, Firewire, dual LAN ports, 10 Channel audio courtesy of six 3.5mm audio jacks or the S/PDiff output, and the new eSATA port on the I/O backplate.

It should also be noted that this near production mainboard no longer has SATA 6GB/s and 2oz Copper PCB silk screened onto the motherboard… Interesting, but at least we know why the Marvell controller was removed.

ASUS just sent us an e-mail after reading this story and sent over some additional comments addressing some things that Legit Reviews mentioned in our preview of the P7P55D EVO motherboard.

“The reason why 2oz copper was removed from the silkscreen is because the EVO samples that were sent out were of course engineering samples so changes will happen as evidenced by the photos sent. ASUS has the stance of not wanting to focusing on material usage but focus on complete design of our motherboards. Additionally the 2oz silkscreen is there to show this is part of the features of our StackCool 3 / 3+ concept which is under the umbrella of our new Xtreme Design concept for all p55 motherboards. The final design of the board will not use this (2oz silkscreen). It will use a silkscreen most likely being StackCool3 or StackCool 3+ ( the + indicates a total of 8 layer PCB 6 and then 2 additionally ). We see this as an overall evolution of innovation and design throughout our motherboard history. We were the first motherboard manufacturer to use 2oz design with our p5e64 WS EVO ( called he95 ) but did not want to tout it as it was just part of our overall component quality choice. We are now further integrating it into StackCool implementation and the overall Xtreme Design initiative. With that said we want to maintain the focus on our complete Xtreme Design not just material usage.

On a second note about SATA 6G, I just got some updated news on this front. Currently it looks like the premium may not have this either. As of now I would just go with the it is a work in progress and if ASUS and Marvell’s Q & A and R & D teams feel satisfied with performance and functionality it will be implemented. ASUS is working closely to ensure the performance and quality of this controller implementation. This is because we do not want to have it start on the wrong footing especially it being a key future technology. The issue at hand seems to be more than an issue in relation to yield and is currently just stated as a technical issue in relation to the controller not working exactly as it should. The only reason why the premium was going to possibly have it outside of the other boards was assuming it was yield based problem we would still been able to implement it just on a smaller scale…”

I’m not sure about you guys, but the Intel P55 Express launch just got more interesting! Expect a full review on this great looking motherboard as soon as Intel launches Core i5 processors!