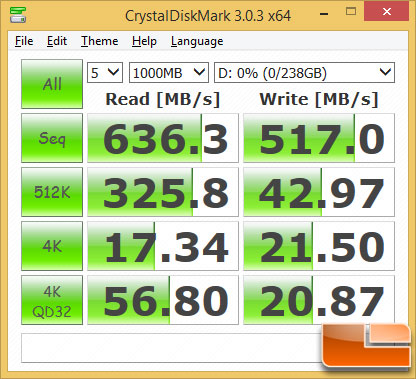 When we first got the ASUS Hyper Express 256GB drive (2 x 128GB SandDisk X110 mSATA SSD) we found that we were hitting 636 MB/s read and 517 MB/s write when it came to sequential speeds. These are solid numbers, but lower than we expected to see. In our first look at the ASUS Hyper Express SATA Express External Enclosure we were hitting 700MB/s read and 750MB/s write speeds, but that was done on larger and faster 256GB SanDisk X110 mSATA SSDs. We expected performance to be a bit lower, but this was a bit too much. We reached out to ASUS and they responded with this answer from a Q&A guide that they are working on.

Why cant I get to the max performance when benchmarking the SATA-Express?

A: We recommend you to disable the CPU C-State, EIST under the BIOS and park the power option under the OS to Performance mode, or just enable the Dynamic Storage Accelerator under the BIOS (limited to some models) to reach the max performance, as during the benchmark, the CPU will be entering to C-State during the heavy/light loading changes and will cause performance suffer. Also please do not disassemble Hyper Express or make any hardware changes inside, it will cause the device malfunction.

Basically ASUS suggested turning off all the low power efficiency settings for the processor in order to get better performance. We gave that a shot and found that our scores did go up for the most part. 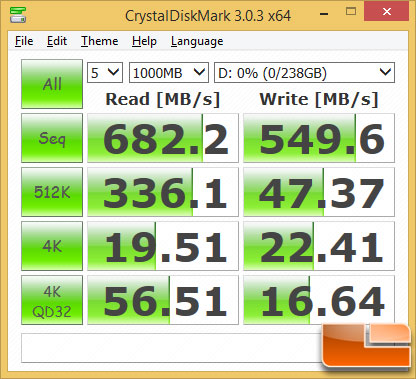 The sequential read speeds went from 636 to 682 MB/s and the write speeds went from 517 to 550 MB/s. This is about a 7% performance gain on the read and write speeds so clearly the low power state of our Intel Core i7-4770K processor and having Windows 8.1 running in balanced mode was keeping us from achieving the full potential of this setup. 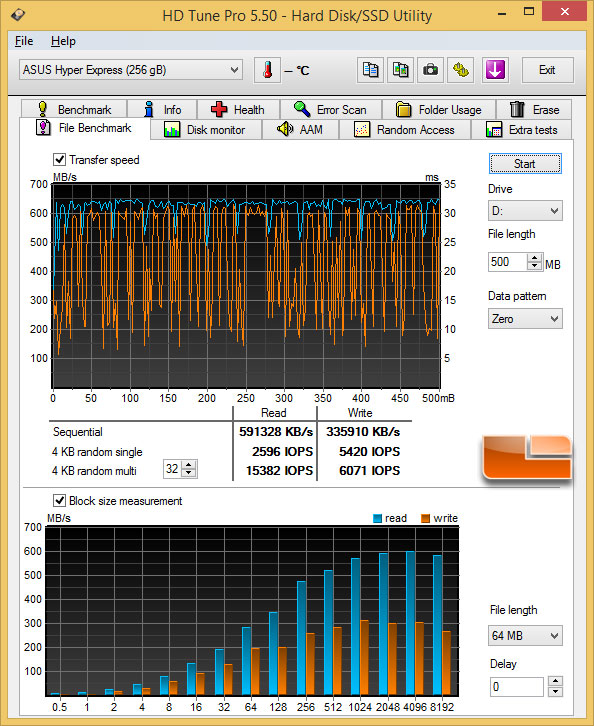 This held true for pretty much every benchmark that we through at the ASUS Hyper Express drive. Here is a run with the motherboard UEFI settings left at default with a clean install of Windows 8.1 w/ Update 1 running the default balanced mode. Notice the sequential file transfer speed was 591MB/s read and 336MB/s write. 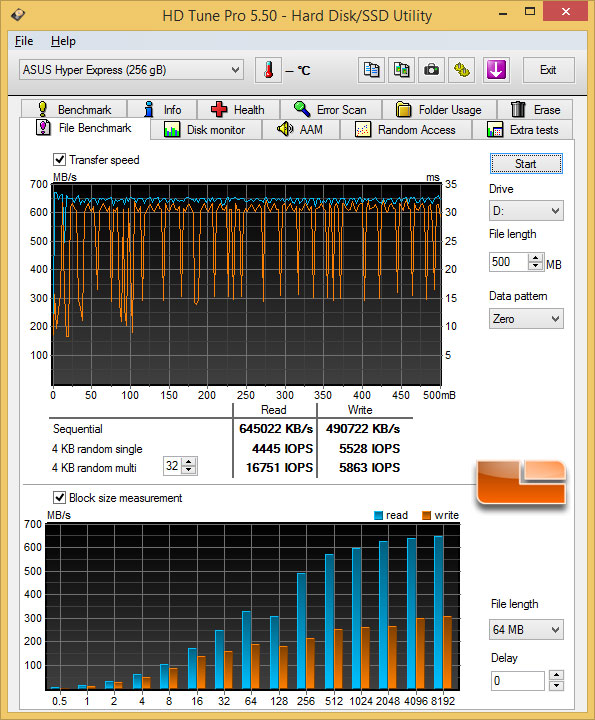 With the Enhanced Intel SpeedStep (EIST) and C-States disabled on the 4770K ‘Haswell’ processor disabled and Windows 8.1 power management settings at high performance the same numbers jumped up to 645MB/s read and 491MB/s write. This is a major 46% performance improvement on the sequential write speeds and this is a storage drive performance glitch unlike any that we have ever seen before.

For testing this pre-production drive we disabled all the key power efficiency settings in order to get the best performance. We are hoping that ASUS or ASMedia will come out with a fix for this though as this work around really kills the power efficiency of the platform.

So, we are running a pre-production drive on early firmware that doesn’t support TRIM and has a few glitches still. That means that our performance numbers are pretty much meaningless, but we thought we’d share them with you just to show you how the first SATA Express hardware is performing. We only expect it to get better from this point on.