ASUS Chromebox Is Intel Powered, Fanless and Starts at $179

Intel developed the a new form factor in 2012 called uCFF (Ultra Compact Form Factor) for a new series of tiny PCs called the NUC (Next Unit of Computing). The Intel NUC has had some pretty good success since being released, but other companies are coming out with similar products that are competitive with what Intel has done. Last year the Gigabyte BRIX hit the market and offered more options and the market took notice. ASUS today announced the Chromebox, which is yet another small PC that is certain to get the attention of those looking for a tiny system that is affordable and runs on the Chrome OS. 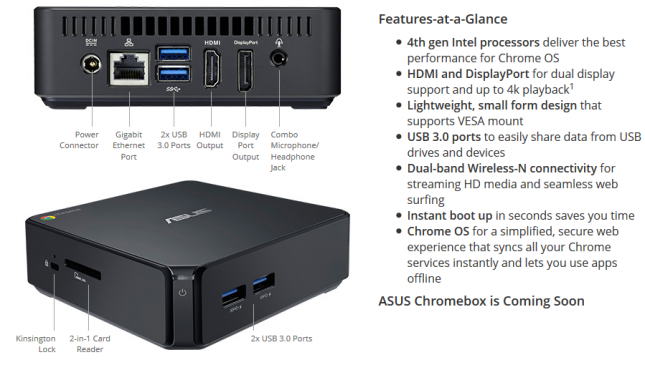 ASUS will be releasing two Chromebox models in North America. The first used is priced at $179 and is powered by an Intel Celeron 2955U Processor and then from there you can move up to a more powerful Intel Core i3-4010U Processor. ASUS has not released pricing for the Core i3 model yet, but we expect it to be around the $349 price range when it comes out in March 2014.  Both processors are current Intel 4th generation (Haswell) designs and are said to have excellent performance under the Google Chrome Operating System. ASUS will be offering an Intel Core i7 sku but does not plan on releasing it to the North American consumer market.  ASUS  believes that the Chromebox provides a gateway to the world of Google web services and thousands of Chrome Web Store apps designed for business, education and home, including many popular services like YouTube, Hulu Plus and Netflix.

The ASUS Chromebox features 802.11 b/g/n dual-band Wi-Fi, four SuperSpeed USB 3.0 ports, HDMI, DisplayPort, Gigabit Ethernet, Bluetooth 4.0 and an SD card reader, so transferring files, photos and other media should be easy. It should be noted that only the Core i3/i7 based skus will support 4K Ultra HD video output. Internal storage consists of a 16GB m.2 SSD, but ASUS will be including a VESA mount and 100GB of Google Drive space for a period of 2-years with each ASUS Chromebox.

One of the really interesting things to note is that all of the models are supposedly fan-less! All of these processors have a Max TDP of 15W, but remember they are in an enclosure that measures just 4.88″ x 4.88″ x 1.65″!