By Nathan Kirsch • February 11, 2014
ARM today announced its Cortex-A17 processor architecture that will become the cornerstone for the companies mid-range smartphone and tablet CPU offerings. ARM expects 344 million smartphones, 105 million tablets and 141 million smart TVs will be using mid-range processors in 2015. With over half a billion devices projected to use mid-range processors (not counting wearables and the auto industries infotainment centers) this is a market that ARM hopes to secure the the rapidly growing mid-range mobile and consumer electronics markets with the upcoming ARM Cortex-A17 processor. 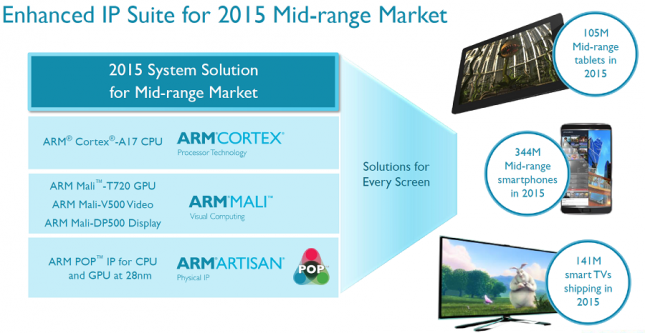 The ARM Cortex-A17 processor offers a 60% uplift and is 20% more energy efficient than ARM’s aging Cortex-A9 when tasked with the same workload, the company said. When the ARM Cortex-A15 was released it was said to be 40% faster than the Coretex-A9 and that is considered a premium processor that can be found in the Exynos 5 Octa and Snapdragon 800. It looks like the Cortex-A17 will be a nice little processor when it comes to performance and we are happy to see that ARM has also able to improve the performance per watt. 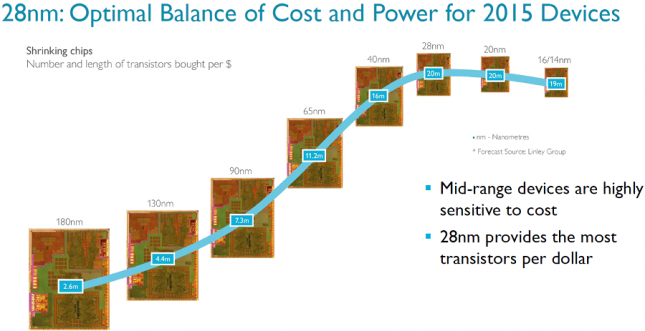 ARM informed us that the Cortex-A17 will be made on the 28nm process node for now, but will move on to 20nm as time goes on and cost comes down. ARM still sees 28nm as being the most cost effective node for handsets coming out in 2015. and will move to advanced nodes with FinFET technology at a later date. The slide above shows the number of transistors that $1 will buy you on any given process node. The best bang for the buck is at the 28nm node right now as it buys you 20 million transistors. 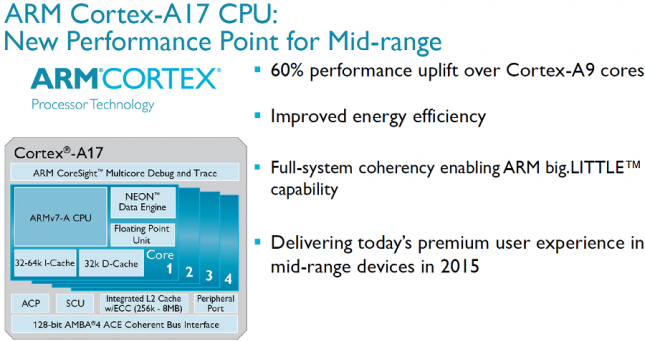 ARM says that the Cortex-A17 can run at clock speeds exceeding 1.5GHz and that quad-core 2 GHz+ solutions are not out of question. The A17 can also be paired with less powerful cores in a big.LITTLE configuration. In a big.LITTLE configuration, the Cortex A17 will function as the “big” core(s) while the Cortex A7 will serve as the “LITTLE” core(s). It should be noted that ARM partners are free in choosing core counts, clock frequencies and implantation, depending upon type of license they hold. There are no plans to bring the ARMv8 32/64-bit architecture to the mid-range market right now, but the good news is that you can 32-bit apps on a 64-bit processor with 32-bit mode when the time comes. ARM believes that the high-end market will move quickly to 64-bit, but the mid-range won’t be so fast. 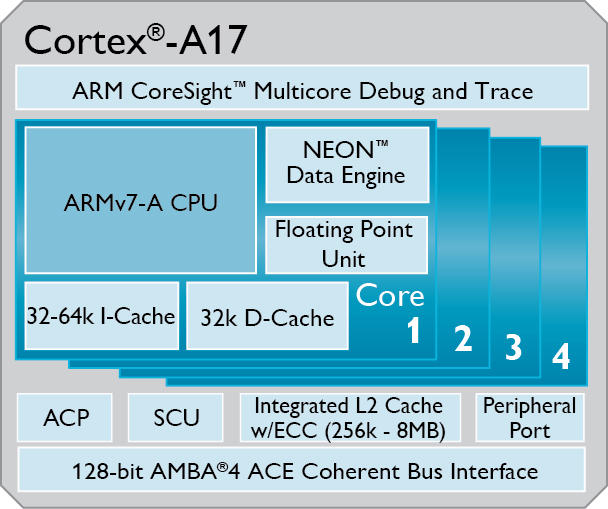 Legit Reviews spoke with ARM about hardware support for 4K video content and found out that there is no dedicated hardware solution since everything is still changing (VP9 and H.265). Right now they are feeding it to 4K video content to the GPU hardware blocks in the Mali-V500 video solution and some of the floating point accelerators of the NEON Data Engine. This will still allow for smooth and power efficient 4K video encoding and decoding! Speaking to ARM representatives about putting pixels to the screen they highlighted that you need to use the right core for any given task. When composting images it was found to be more efficient to do it on the display unit (DPU) versus the CPU. The good news for everyone is that the ARM Cortex-A17 will really open the door for higher display resolution standards on affordable mobile devices. 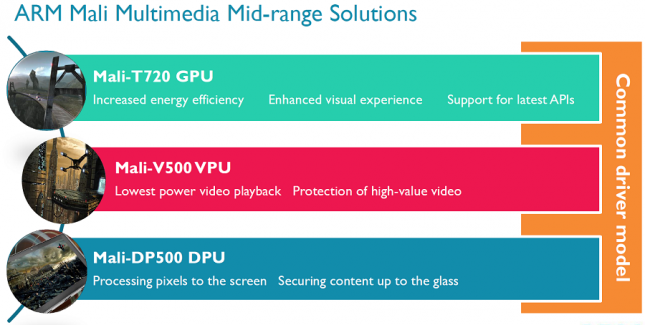 It should be noted that the Mali-DP500 DPU is the first product to be released by ARM that uses Cadences PANTA family of high-resolution display processor and scaling coprocessor IP cores. Some of you might recall that ARM acquired Cadence in September 2013. ARM told Legit Reviews that bringing the Cadence PANTA display controller cores to ARM will help secure high-value video content all the way to the glass display. For example a a number of Hollywood film studios and content owners are looking to stream premium content to the phone as soon as it comes out to movie theaters. Basically this is a secure video path all the way to the screen to prevent the data from being copied. ARM says that the DP500 supports both 1080P and Ultra HD 4K content.

The ARM Cortex-A17 IP is sampling to ARM customers at the end of this quarter and should be shipping in retail products in early 2015.