PlayStation has announced the PlayStation Plus games that will be available for free this month. The games include Oddworld: Soulstorm, Days Gone, and Zombie Army 4: Dead War. The trio of games will be available to download starting Tuesday, April 6, and ending Monday, May 3.

Oddworld: Soulstorm sees the return of franchise icon Abe and is set directly after the events in the 2014 franchise entry. Players will recruit more followers and execute stealthy maneuvers and solve puzzles. They can also scavenge goods and craft weapons to liberate supporters. 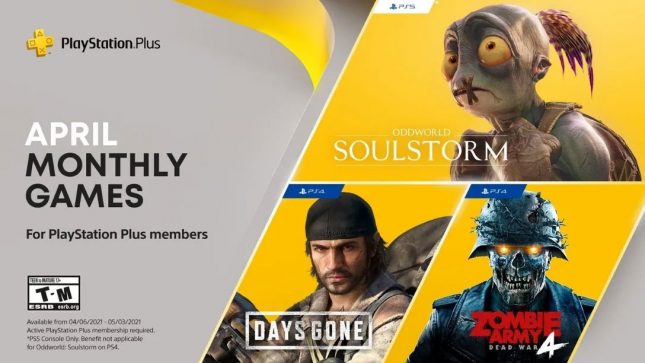 Days Gone puts players into the post-zombie apocalyptic Pacific Northwest. Players will fight the Freakers and human enemies. The game includes unpredictable weather and different times of day and night, along with the ability to create custom weapons and upgrade your ride.

Zombie Army 4: Dead War comes from the developers behind Sniper Delete 4. The game supports between one and four players and is set in 1940s Europe as players tried to hold back Hitler’s undead army.