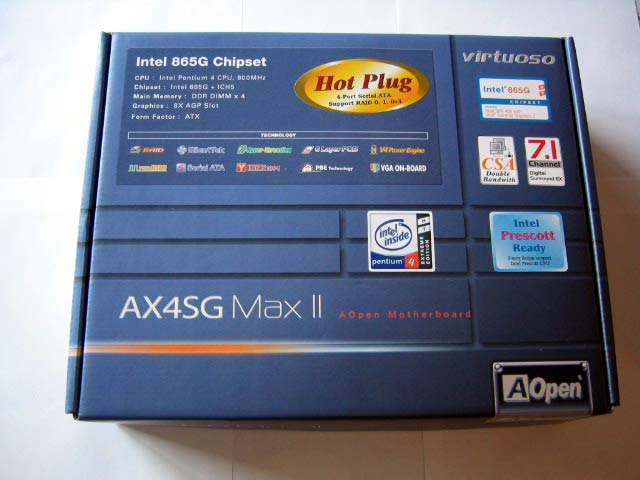 Today
we will be taking a close look at AOpen’s I865G “Springdale”
motherboard that was just released to the public today: the AX4SG Max!
The “G” in the I865G chipset stands for integrated Graphics.
So this motherboard will have onboard video which we will mention again
on our features page. Shown below is a chart of AOpen’s 5 Intel 865 “Springdale”
Chipset motherboards that have been released in North America. Two of
the boards use the I865PE chipset, and the other three use the I865G chipset
(one of which is a Micro-ATX motherboard). All of these motherboards come
with AOpen’s 3-year warranty.

AOpen
is a company that we have been dealing with for a while now and have developed
a very strong relationship with. AOpen is a very reliable company that
you will not go wrong with. They only manufacture quality products that
their customers will be happy with. You can learn more about AOpen by
visiting their website.

Now we
will start our tour of AOpen’s AX4SG Max motherboard! We will begin with
a close look at the package and features this board contains.

As you
can see by AOpen’s Motherboard package, they give you everything you need
to fully use this motherboard as soon as you receive it!

AOpen
has put everything possible on this motherboard! They have integrated
all of the latest technologies like Gigabit LAN, Firewire, USB2.0, Hyper-threading…
the list is above, I don’t need to re-state it all. All I need to say
is that it is a rather impressive list.

The one
technology that I will touch on is the VGA On-Board. With the I865G chipset,
you get onboard graphics. The onboard graphics you get is nothing special.
Through the BIOS, you can choose how much memory will be used to support
the onboard VGA graphics. The Max is 32MB and the Min is 4MB. As you can
see, the onboard graphics you get is not at a performance level at all;
the 8x AGP slot is there for that. The purpose for having onboard VGA
for this board is if you were using it as a server or such where you had
multiple servers connected to a single monitor. The onboard VGA would
become very handy in that case.

Now that
you know what this board has to offer, I will show you the layout of the
AX4SG Max Motherboard.