On Tuesday, June 2nd AMD launched their 6th generation A-Series processor designed to enhance the tasks that users of mid-range laptops most commonly use; such as email, music, video streaming, content management and online gaming. In addition, with Windows 10 coming very soon, AMD has worked closely with Microsoft to ensure that their latest APU supports all of the latest security features and technology that Windows 10 will provide.  Let’s take a look at some of the AMD Tech Day presentation to see what we can learn. 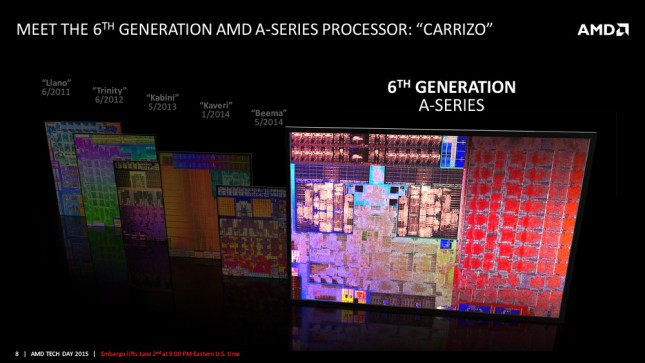 According to AMD, three main uses of laptops are Content Management, Streaming Video and Online Gaming.  This makes total sense for the average home user.  If you break each of these down, Content Management could include pictures, video, and music.  Managing content across multiple devices can be a bit tricky, so AMD is looking to make that easier.  Streaming Video makes sense as people are streaming more movies and various videos from Netflix, Amazon, Hulu and YouTube all the time.  Online Gaming, of course that’s a focus, gaming has become a social experience for many people.  These are what AMD is planning on focusing on with their new processor. 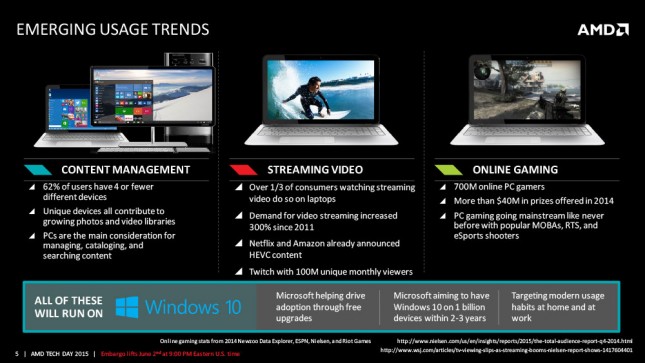 AMD is always pushing the boundries and implementing new technology into their processors.  According to AMD, they are the first to implement a HEVC (High Efficiency Video Codec) for mainstream laptops.  Implementing HSA (Heterogeneous System Architecture) looks to reduce the latency between CPU, GPU and other components, allowing developers to not focus on how data is moved on the system.  ARM TrustZone, is one technology designed to secure the system from malicious code. 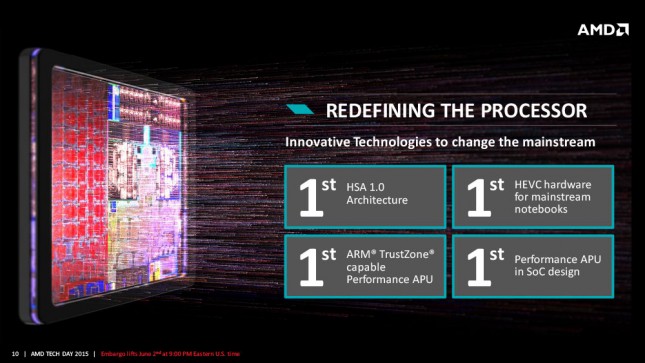 What benefit is the HEVC decoder for the average users?   Better playback resolution, longer battery life, smoother playback, and lower bandwidth requirements for streaming video.  All of which can make your entertainment experience more enjoyable. 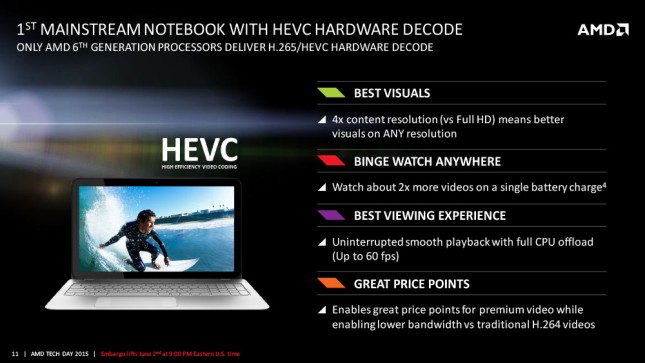 Breaking down these new features, we see that by implementing a HEVC decoder into the processor, AMD states they can increase the battery life of a mobile device when playing video.  In addition, video playback will be smoother and up to Ultra HD quality. 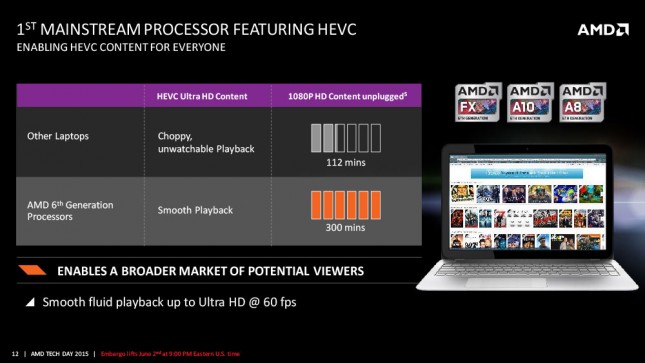 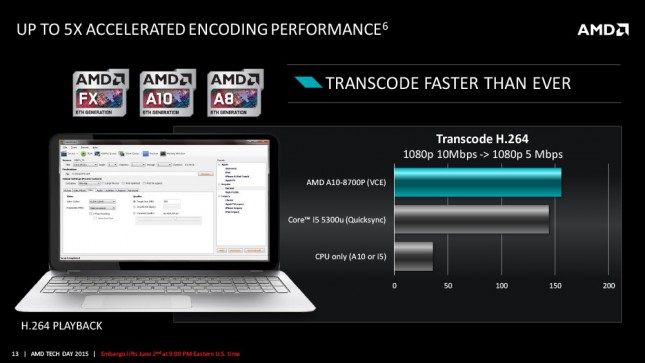 Everybody get focused on battery life for mobile devices.  Playing video will quickly drain a mobile devices battery, implementing the HEVC into the processor reduces the battery requirements, allowing for a much longer viewing time before having to charge the mobile device. 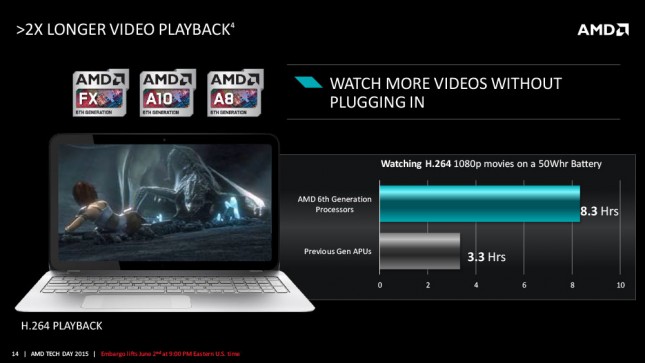 The AMD Carrizo APU’s will implement performance enhancements for various technologies.  While the goal of all processors are to implement faster performance, AMD is looking to do that with up to 12 compute cores, and by working with Microsoft to optimize the APU for Windows 10.  That’s not all though, two AMD technologies they are implementing in Carrizo is the AMD Looking Glass and Gesture Control.  Both of these are available today with other technologies, however AMD says the enchancements in their new APU will make them faster and cheaper.  Looking Glass makes it easy to tag photos by using facial recognition, this could be very helpful if you have a large number of photos to sort.  Gesture Control is exactly what it sounds like, using a webcam to control your system with simple gestures.  This can be done today with RealSense depth cameras, however AMD’s technology will use any webcam to do the same thing. 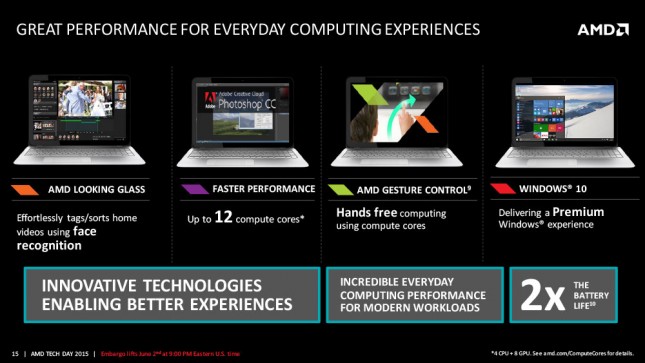 AMD touts that the Carrizo APU will have up to 12 Compute Cores, this is a little misleading for the average consumer.  Most will see that and assume it is 12 CPU cores.  What the 12 Compute Cores are is really 4 Excavator CPU cores, and up to 8 GCN GPU cores (along the lines of the Radeon R7) on one chip.  Of course being HSA enabled, if an application is developed for that it can utilize BOTH the CPU and GPU cores at the same time to enhance the performance; OpenCL 2.0 apps should be able to utilize the HSA capabilities of the Carrizo APUs. 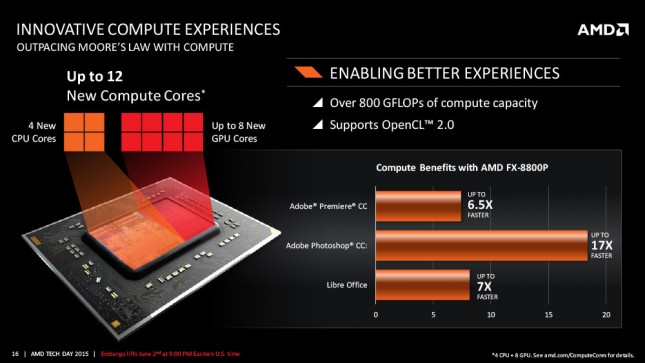 One thing that AMD needs to overcome is that AMD is constantly pushed to the background for the more expensive Intel processors due to retailers constantly pushing the Intel devices.  Consumers are made to believe that the more expensive Intel CPU’s are far superior to AMD’s APU’s, what most don’t realize is that the average consumer really doesn’t need to have an expensive mobile device to do what they want.  The technologies that AMD has implemented in their 6th generation Carrizo APU will enable consumers to do what they want more effectively and efficiently. 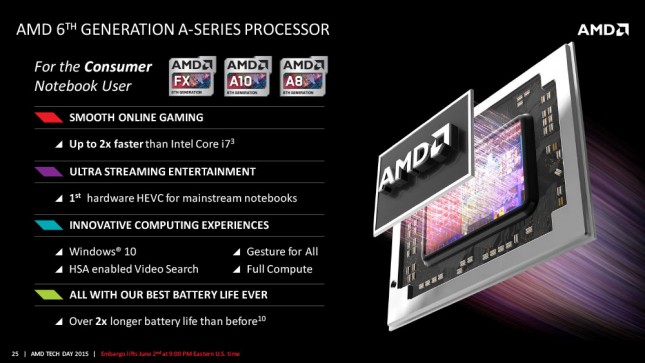 The AMD Carrizo is looking to be a very interesting APU for the mainstream mobile user, it is not necessarily aimed at the ultra low end budget laptop users or the high end enthusiast grade laptops.  While its actual performance will need to be evaluated, if it can do what AMD is telling us, then they could have an incredible mobile processor on their hands and maybe their underlaying technology can  help propel them off the back shelves and in front of the consumers.

The AMD Carrizo APU is just starting to get into the hands of the manufacturing partners, so we should start seeing new mobile devices in time for “Back to School” with the 6th generation Carrizo APU soon from many major manufacturers such as Dell, HP, Lenovo, ASUS, and Toshiba.