After being asked by our readers to look into benchmarking memory on a Socket 939 platform we have had the chance to take a look and the results are in! 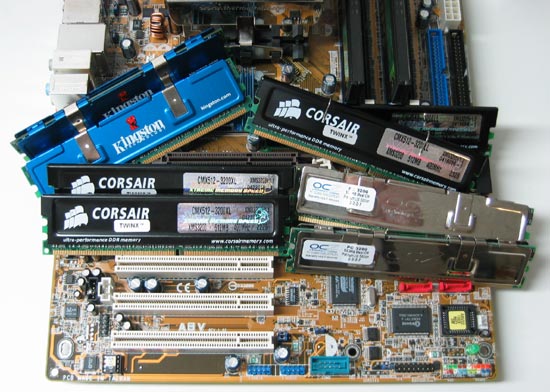 Since the most popular DDR1 memory sold on the market is still PC-3200 we took a look at some memory from the “Big 3” (Corsair, Kingston, OCZ) sellers here in America. We ran all the memory at the manufacturer set timings and also tweaked the voltages to note any weird characteristics. We ran full testing and benchmarking on the following 1GB kits (2x 512mb) on our ASUS A8V Rev 1.02 motherboard:

Let’s get on to our test system and our benchmarks.

All testing was done on a fresh install of Windows XP Professional build 2600 with Service Pack 1A and DirectX 9.0b. All benchmarks were completed on the desktop with no other software programs running. No overclocking was done on the video card unless noted. Our testing processor was an unlocked AMD 939-pin 3800+.

The audio, USB, Firewire, and lan features were disabled in the BIOS menu for all the testing competed during this review.

Results: As you can tell all of the modules we tested performed virtually identically when tested under Sandra 2004. Nothing significant here so let’s move on.