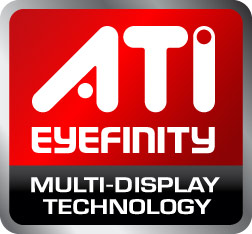 AMD is showing off a brand new technology today called Eyefinity (press release). AMD’s next-generation of DirectX 11 graphics cards come with support for up to to six independent displays, which allows you the ability to connect anywhere from one to six displays to just one video card. AMD says that the experience is unlike anything you have ever seen before. This is because using six 30″ LCD displays will give you an insane 7680×3200 pixel resolution for gaming! This setup is capable of 268 Megapixels! 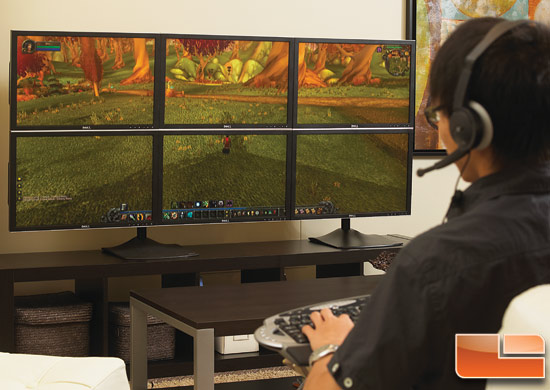 AMD obviously spent a lot of time on the Eyefinity drivers and they seem to be fairly solid even though the graphics cards won’t be launched for a number of weeks. AMD had a system up and playing the upcoming DX11 racing game, Dirt 2, at 7680 x 3200 with solid performance from the looks of it. Playing games at this resolution will tax the system, but obviously the new Evergreen DirectX 11 graphics card has the muscle to run the game just fine. We got our hands dirty this morning and tried out gaming across three 30″ displays in a 3 x 1 configuration and we must say it’s very different as there is just so much screen to look at. It’s a game changer for sure, as the gaming experience is a lot different. 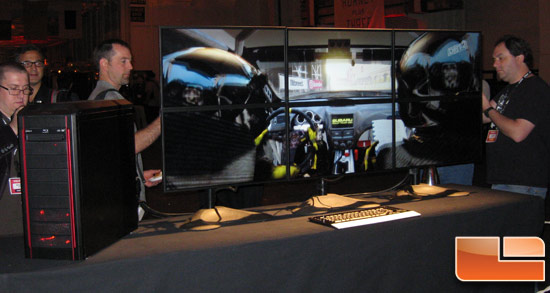 Here is one of the demo systems being shown at the launch event this afternoon running a demo loop of Dirt 2. AMD has partnered display maker Samsung that will be introducing new displays today that feature with ultra-thin bezels, designed with Eyefinity in mind. 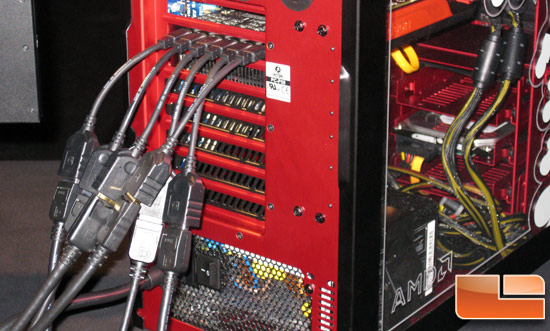 The back of the PC is what the hardware enthusiast is going to be interested in and the picture above is worth a million bucks. You can clearly see all six of the DisplayPort connections that are plugged into a single expansion slot. 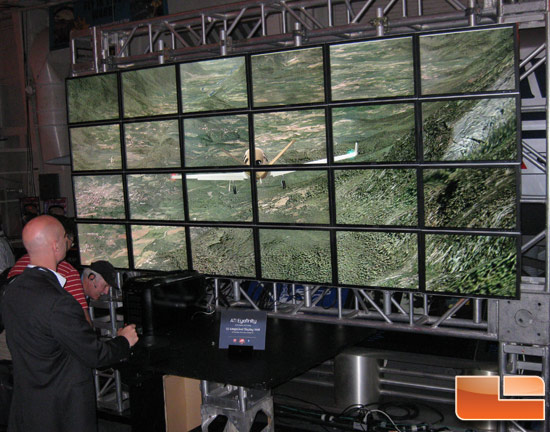 This is ATI Eyefinity to the extreme!  You are looking at 24 panels and 55 Megapixels of video content coming from one PC that is running multi-GPU technology!  Sure a projector might be a little cheaper and easier to run a display of this size, but it doesn’t have the wow factor that this ATI Eyefinity setup offers. 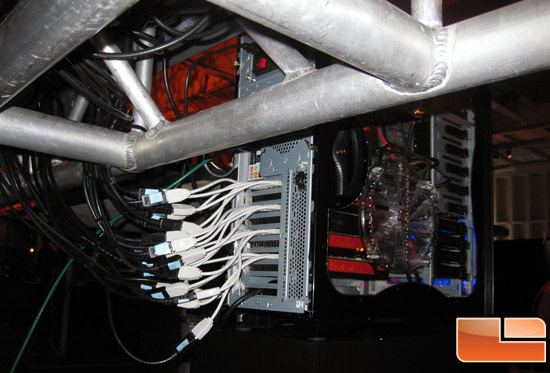 Check back later for more coverage of the event!