The wait for AMD Ryzen is finally over! You can now officially go out and pre-order one of three AMD Ryzen 7 processors, which is being touted as the fastest 8-core processor on the market today. 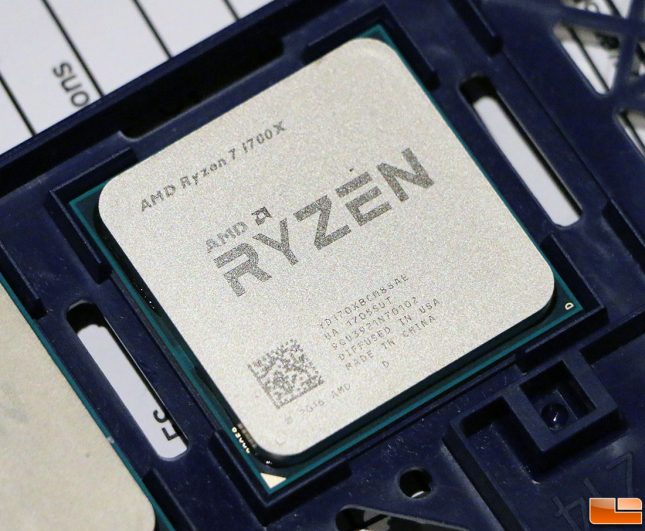 AMD has long stated that the IPC performance target of Ryzen was 40%, but they actually exceeded that and managed to hit an impressive 52% IPC increase from AMD’s ‘Excavator’ core. That is a major uplift that was thanks to over 2 million engineering hours from hundreds of engineers over a four year period to bring Ryzen to market! Many people thought 40% more instructions per clock (single-threaded performance) was an ambitious goal and thought AMD couldn’t do it. AMD is proud of this feat and Dr. Lisa Su called it a once in a decade achievement. 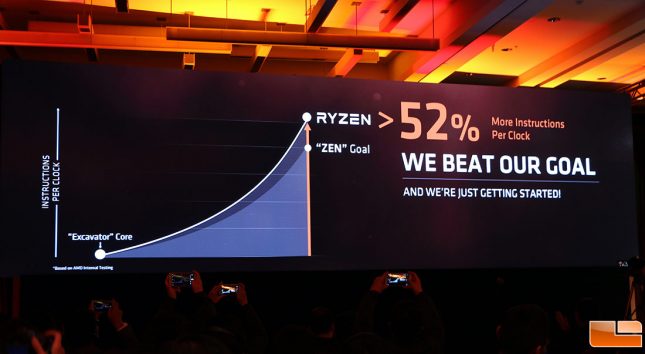 Below is the first official die shot for an 8-core, 16-thread Ryzen processor that contains over 4.8 billion transistors and 2,000 meters of signal wiring. Dr. Lisa Su also held up one of the final retail Ryzen processors as they are now in mas productions at Global Foundaries and wafers are rolling off the line as you read this.

On March 2nd AMD will be releasing the Ryzen 7 1700, Ryzen 7 1700X and the Ryzen 7 1800X for $329, $399 and $499, respectively. All three of these processors are 8-core, 16-thread processors that are ideal for gamers and content creators that are looking for solid multi-threaded performance. You’ll be able to pick up an AMD Radeon 7 1700 8-Core processor and an AMD B350 from Gigabyte for under $425! That is impressive and just goes to shoe that 8-core processors will soon be mainstream! Let’s just hope game and app developers jump onboard and code properly to take advantage of all those cores.

AMD Ryzen 5 and Ryzen 3 series processors will be launching at a later date. 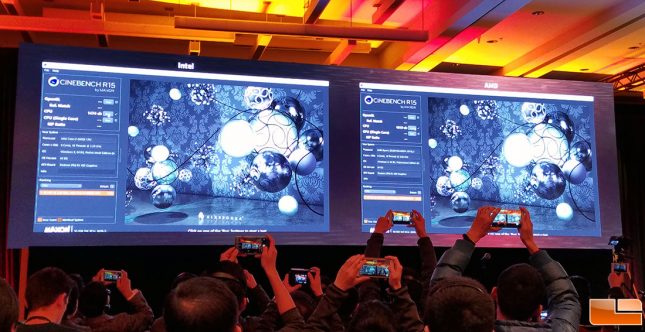 When it comes to benchmark performance we were shown a couple live runs of Cinebench R15 and then there were AMD provided to the media during the Ryzen tech day event to help give an idea of both multi-threaded and single threaded performance. The numbers below were AMD provided.

The only single threaded performance numbers that were discussed were that the AMD Ryzen 7 1800X (3.6 GHz base/4.0 GHz Boost) scored 162 points in Cinebench R15, which just happens to be the same as the Intel Core i7-6900K. The Ryzen 7 1800X outperforms the Intel Core i7-6900K processor in the multi-threaded test by 9%. If you do the math you’ll see that AMD Ryzen is about 15% slower than Intel Kaby Lake on single-threaded IPC and basically tied with Intel Broadwell-E processors.

AMD also showed a demo of the game title Sniper Elite 4 running on both an AMD Ryzen (Ryzen 7 1800X) processor and an Intel Broadwell-E (Core i7-6900K) processor to show that the frame rate (mostly in the mid 70 FPS range) was comparable on both systems. AMD is happy that the Ryzen CPU was able to keep up with the GPU and the demo rig was running an AMD Radeon RX 480 Crossfire video card setup. Having comparable 4K gaming performance is great to see, but we are also highly interested in 1080P gaming performance where the GPU’s are less of the bottleneck.

The AMD AM4 Ecosystem is the best ever as AMD will have 82 boards available for launch. There are also 19 PC builders that will have Ryzen based systems at launch and that number is expected to grow over 200 in Q1 2017. By the end of the 1H of 2017 AMD expects every gaming system builder will have an AMD Ryzen based gaming tower. 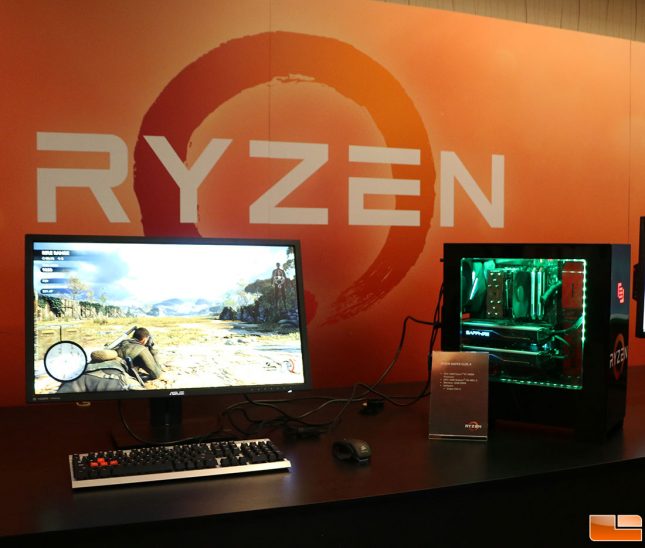 The interesting news is that you can go ahead and pre-oder an AMD Ryzen 7 processor right now. We are shocked that AMD is letting folks pre-order a Ryzen 7 CPU without seeing any independent benchmark results, but they are. You’ll be able to see our AMD Ryzen 7 benchmark numbers on March 2nd, 2017.

Summary of the announcements made by AMD today:

Video of Lisa Su talking about all the above during the Ryzen Tech Day can be viewed below:

Lastly, an Intel spokesperson reached out with the following quote that we could use for any Ryzen stories that we might be working on:

We take any competition seriously but as weve learned, consumers usually take a wait and see approach on performance claims for untested products. 7th Gen Intel Core delivers the best experiences, and with 8th Gen Intel Core and new technologies like Intel Optane memory coming soon, Intel will not stop raising the bar.

We always suggest seeing independent benchmark review numbers before buying a computing platform that costs hundreds of dollars and will likely use for many years. Our independent review will be posted on March 2nd, 2017 and we have been told by AMD that no money will be taken on the pre-orders until they ship on March 2nd.