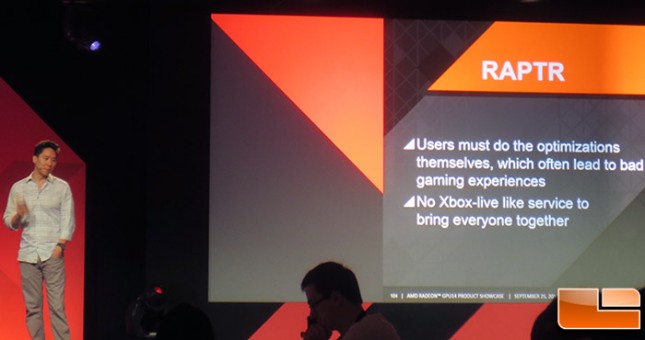 AMD and NVIDIA both feel that PC gamers don’t want to mess with finding the sweet spot on their own and wanted to find a way to make PC Gaming as simple to do as console gaming. NVIDIA went out and came up with their own solution, but AMD found another company that already does that and partnered with them. Raptr has over 18 million PC gamers in their community, so they are able to use the data from millions of people to figure out what the best settings are for your particular system.

The AMD Gaming Evolved App is a desktop gaming app that allows users to:

The AMD Gaming Evolved App by Raptr currently supports 28 game titles, but more game titles will be supported as time goes on.

With a single click in the apps Control Center, gamers will be able to optimize their games based on performance, quality or a balance of both for their AMD hardware. Optimal game settings are determined using system and game data captured from the millions of PCs stored in Raptrs Cloud combined with extensive testing of various combinations of GPUs, CPUs, and resolutions.
Initially the app will work for any PC, desktop or notebook, with a current generation AMD card, but will expand to include more legacy cards, like ATI, over time.
You can download the AMD Gaming Evolved App here.
Tweets by @LegitReviews