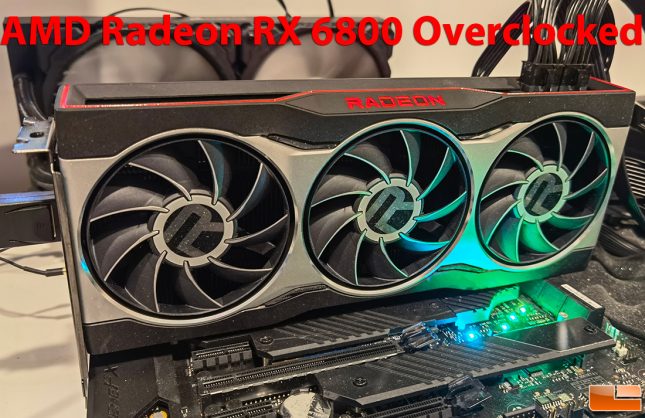 Well, the chances of the 6800 performing better than the 6800 XT when overclocked will be pretty tough. Both are based on AMD RDNA 2 GPUs, but what is enabled for each of the two is significantly different.

AMD justifies the $70 price increase thanks to these hardware and clock frequency differences. Let’s take a look at what we can get back for free with a little overclocking. 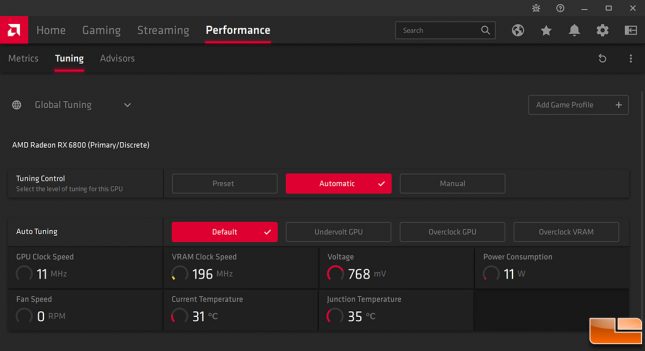 To overclock the AMD Radeon RX 6800 we turned to Radeon Software Adrenalin. This utility has an overclocking tuner built-in under the performance section. The default settings for this section is automatic, but you can enable manual tuning control. Once you enable manual tuning control you can then enable the GPU, VRAM, Fan and Power tuning sections. This is where the overclocking fun begins on the Radeon RX 6800 graphics card. 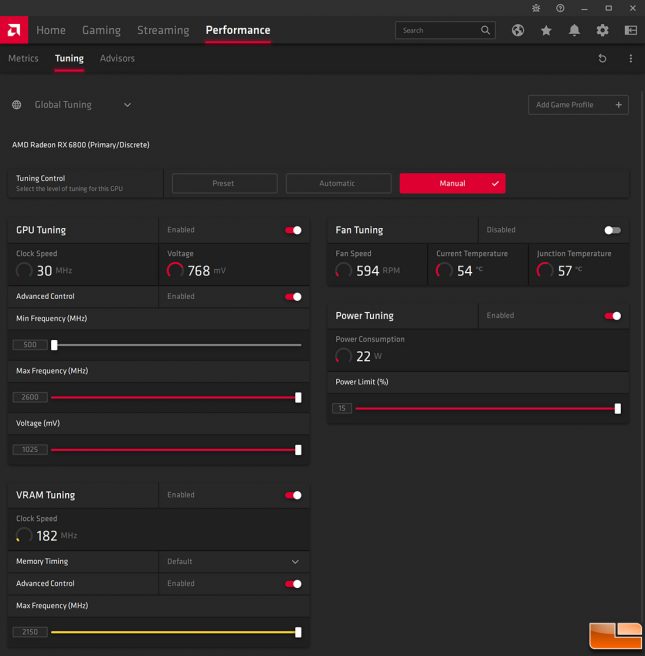 How To Overclock the Radeon RX 6800

The first thing that we wanted to do was to increase the GPU clocks on the Big Navi GPU. With this utility the engineers at AMD give you access to the knobs that adjust the minimum frequency and maximum frequency of the stream processors. In the past you could select the clock speed you wanted to run at, but now you can force them to run in a selected range. This makes things a little more complicated at fist, but will allow you to a more precise overclock than ever before. If you’ve overclocked before you’ll know that some applications can run fine with an overclock and others will crash. Clock speed greatly varies depending on the workload! This is a new level of fine tuning that is nice to have, but certainly increased the difficulty of overclocking.

The GPU Voltage on the AMD Radeon RX 6800 is already set to 1025 mV and you can’t increase it any further. In fact, AMD says that to get the best overclocking results that you’ll likely need to undervolt the GPU. This is not something that we wanted to try out for the time being, so we just that alone.

VRAM tuning allows you to increase the clock frequency on the GDDR6 memory from 2000MHz to 2150MHz. VRAM overclocking is pretty straight forward and most cards will be able to run at 2150MHz without issue. 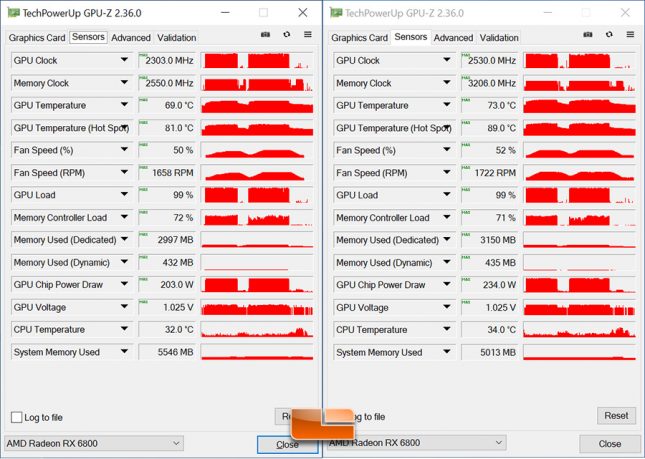 The left side GPU-Z result from the image above shows the stock Radeon RX 6800 16GB graphics card running 3DMark Time Spy. GPU clocks were hitting up to 2303MHz with default settings and they reached up to 2530MHz with the overclock (shown right side). The memory clock readings appear to be erroneous. The overclock pushed the power draw of the GPU up to 234 Watts from 203 Watts and the temperature also increased from 69C to 73C. The hot spot temperature of the GPU increased from 81C to 89C, so overclocking obviously uses more power. 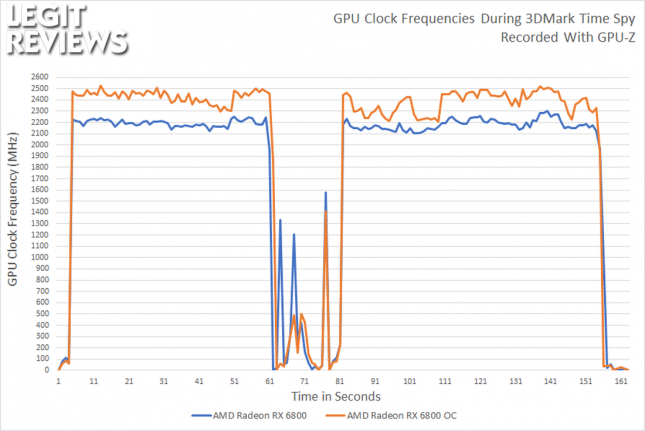 Keep in mind that the AMD Radeon RX 6800 has a boost frequency of 2105MHz and a game frequency of 1815MHz straight out of the box. Our reference card runs well above the boost clock! The clock on this model is dynamic and based on thermals, power and workload being run. 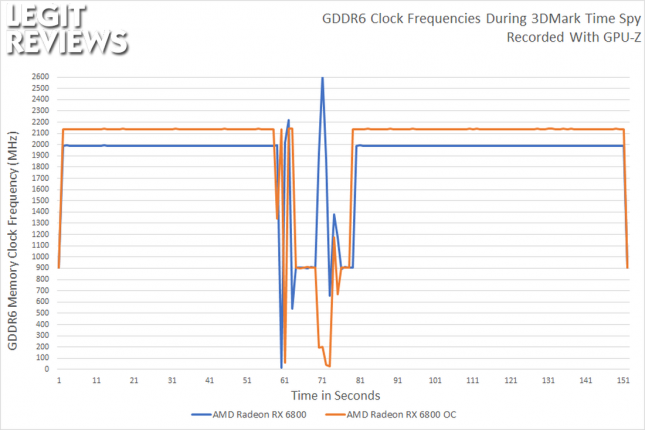 The memory clock reading is a little wonky when it isn’t at full load, but during the benchmarks runs it was pretty much at 2000MHz stock and 2150MHz overclocked. 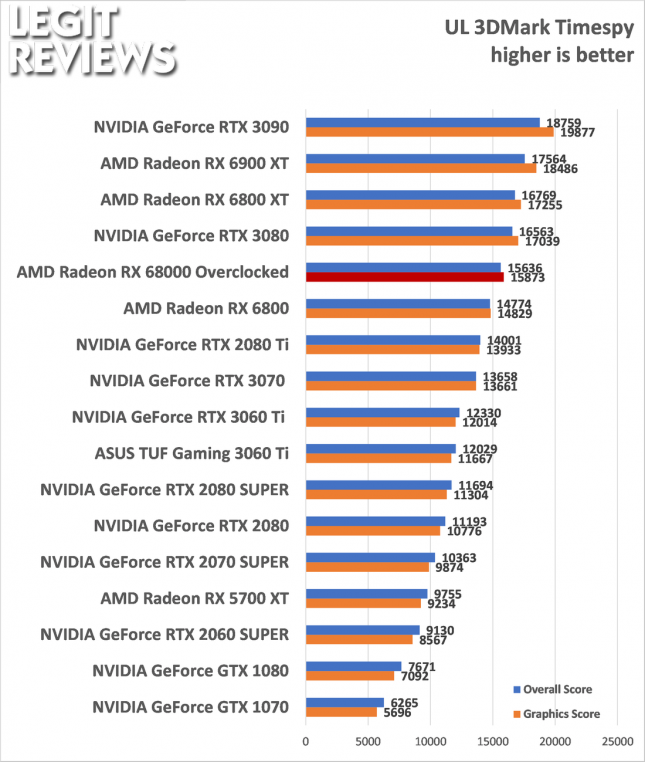 We saw about an 8% performance increase in the graphics subtest on 3DMark Time Spy thanks to our overclock on the 6800! 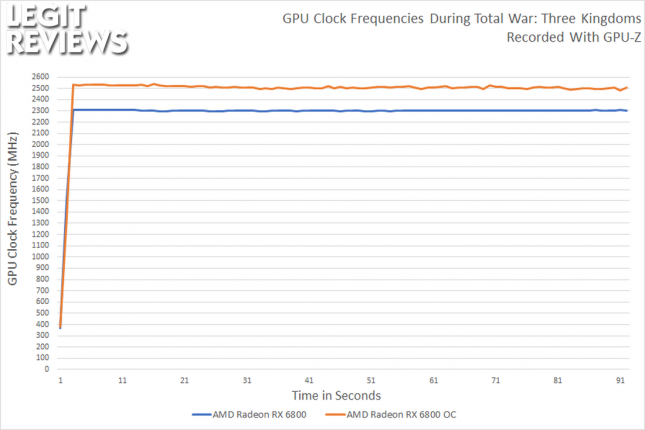 Here is a look at the GPU-Z logs from an actual game title that shows how the AMD Radeon RX 6800 overclocked to 2600MHz for the maximum clock frequency performs. It peaked at 2537MHz in the Total War: Three Kingdoms benchmark. The highest clock that we saw on this card was 2552 MHz while running Watch Dogs: Legion. Getting nearly 2.6GHz on the GPU clock frequency is very impressive! 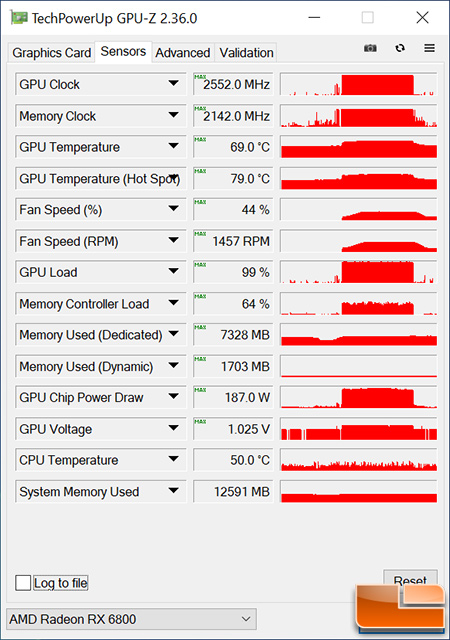 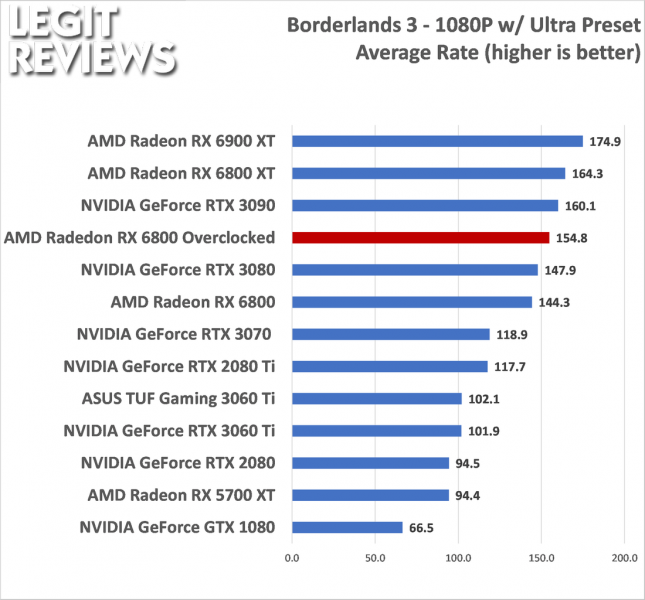 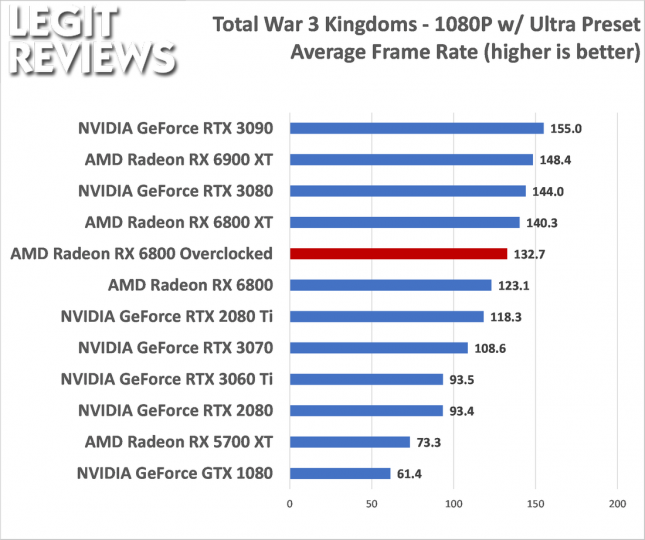 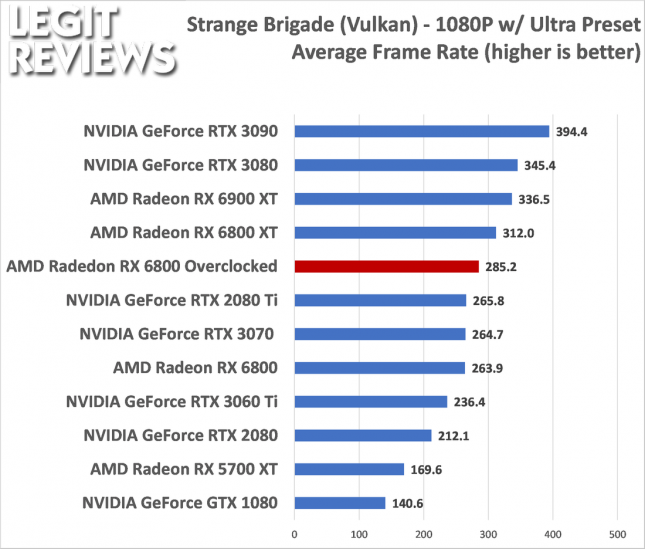 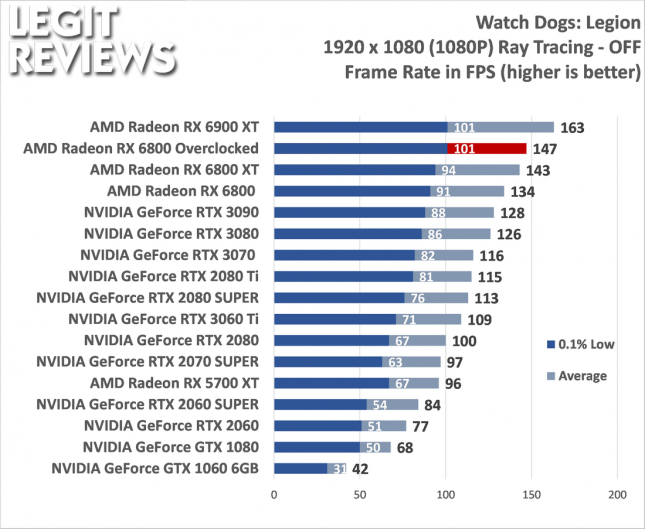 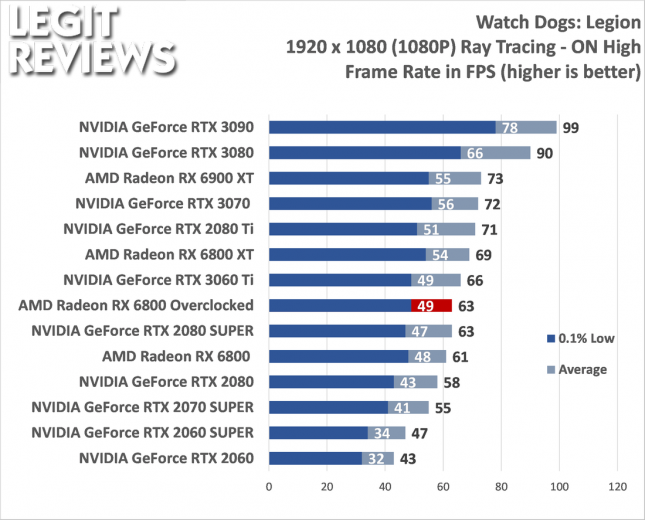 Overclocking the AMD Radeon RX 6800 was fun and pretty simple to do. We managed to overclock the card as high as AMD’s utility would allow and that greatly improved the performance of the card. For example, in Watch Dogs: Legion we saw a 9.7% performance increase with ray tracing disabled. In other game titles like Total War: Three Kingdoms, Strange Brigade, and Borderlands 3 we saw a 7-8% uplift in performance. Those are impressive performance gains and yet it feels like this card still has more overhead left in it.

Our overclock was limited by the sliders in AMD’s tuner as we couldn’t go over 2600 MHz on the GPU and 2150 MHz on the GDDR6 memory. It would be nice if AMD increased the maximum frequencies, but we are happy with this overclock. We played some games online with this overclock for around an hour and never ran into any stability issues. It feels like we won the silicon lottery this time around and that is always a good feeling.

Hopefully this answers some of your questions on overclocking the Radeon RX 6800 graphics card. Now you just need to find out to buy!