The AMD Radeon RX 6800 series currently consists of the RX 6800, RX 6800 XT and RX 6900 XT graphics cards and is a pretty strong lineup. Pricing for these cards is $579, $649 and $999, respectively. If you are looking for something a little less expensive we have some good news! AMD just introduced the AMD Radeon RX 6700 XT during a streamed event this morning. 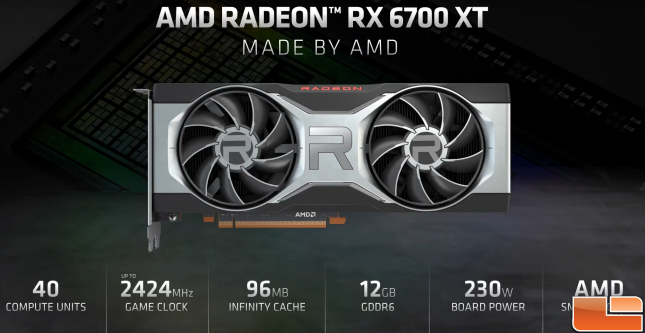 This model starts at $479 and will be available on March 18th, 2021. Radeon RX 6700 XT cards will be widely available on the 18th as both AMD reference cards as well as custom cards from board partners will all be released on that date. AMD understands that there is a shortage of GPUs on the market right now and they thought releasing everything at once would be the best thing for gamers.

The AMD Radeon RX 6700 XT uses the RDNA2 architecture just like the higher-end model and still has impressive features. For example, the 6700 XT features 40 compute units (2560 Stream Processors), 160 Texture Units, 96MB of Infinity Cache, 12MB of GDDR6 memory, and a 230W board power rating. When it comes to clock speeds the 6700 XT has a 2424 MHz game clock frequency and a 2581 MHz boost frequency. This is good for a peak texture fill-rate of up to 413 GT/s and 26.43 TFLOPs for peak half precision compute performance.

AMD recommends a 650W or larger power supply for the 6700 XT models. When it comes to power connectors the AMD reference board has an 8-pin and 6-pin PCIe power connector.

Having 12MB of GDDR6 looks like it is going to be a major selling point for this card as todays games are using more memory. AMD did not say during the launch event what the memory bus is on this card, but the product page is now live and shows that it is using a 192-bit memory bus rather than the 256-bit memory bus used on the higher-end Radeon RX 6000 series models. It delivers 384 GB/s of memory bandwidth with this configuration. 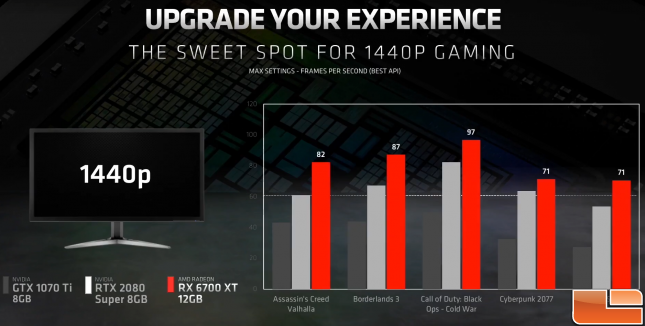 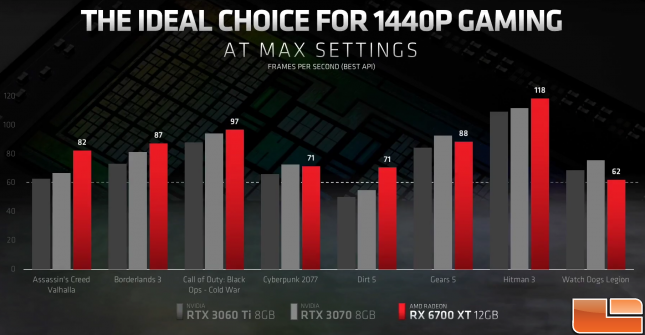 AMD showed a good number of gaming performance results at 1440P and showed that they crushed the NVIDIA GeForce RTX 3060 Ti and the GeForce RTX 3070 at max settings. They also showed how they were superior to the GeForce GTX 1070 Ti and GeForce RTX 2080 SUPER 8GB models from earlier generations to entice current owners to try AMD out.

Legit Reviews will have a fill review of the Radeon RX 6700 XT for ahead of the launch and look forward to trying one of these cards out!