The AMD Radeon R9 Fury X and Fury video cards got the attention of the gaming community when they were released in June 2015 as the new Fiji GPU and High Bandwidth Memory (HBM) was very intriguing to the community. It was tough to find any Fury cards in-stock at Amazon or Newegg following their release, but in recent weeks they have been found to be regularly available on Newegg. With the Fury cards supply/demand finally stabilizing it shouldn’t come as a shock that AMD announced the AMD Radeon R9 Nano details this morning. The AMD Radeon R9 Nano video card measures just six-inches in length, but AMD somehow managed to stuff the full Fiji XT GPU with 4GB of HBM memory. The bad news is that the AMD Radeon R9 Nano isn’t going to be cheap and will have a suggested retail price of $649 when it comes to store shelves on September 10th, 2015. 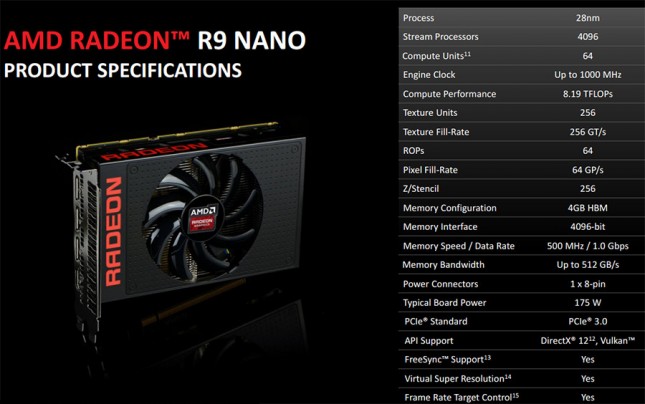 The Radeon R9 Nano features the full AMD ‘Fiji’ GPU with 4096 Stream Processors and 64 Compute units running at 1000MHz. This is good for 8.19 TFLOPS of GPU compute performance or 1.365 TFLOPS per inch! The 4GB of HBM 1 memory running at 500MHz uses a 4096-bit bus and has 512 GB/s of memory bandwidth. When it comes to power the card is shown as using 175W under typical scenarios and has just one 8-pin PCIe power connector on the end of the card. The AMD Radeon R9 Fury X is a 275W card, so AMD will be lowering clock speeds and voltages to get the R9 Nano to fit in the power envelope that it is designed for. This means that it will likely be running in the 800-1000 MHz range and if the card hits 85C it will be thermally constrained by the cards software. 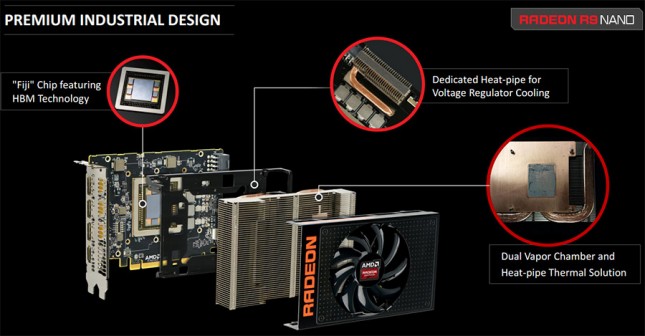 AMD went with a ‘premium industrial design’ for the cards GPU cooler. This means you have a dual vapor chamber and heat-pipe copper block that helps transfer heat to the cooling fins. The Nano card also has a dedicated heat-pipe for Voltage Regulator cooling. The GPU cooler is topped off with a full metal shroud. AMD says that this cooler will prevent the Nano from being thermally constrained.

When it comes to performance the folks over at AMD believe that the AMD Radeon R9 Nano is the fastest Mini-ITX graphics card to ever be released. They included some 4K performance results against the NVIDIA GeForce GTX 970 Mini-ITX graphics card to show that this tiny card is superior and has enough horsepower to beat one of NVIDIA’s flagship series cards. Then again, the Gigabyte GeForce GTX 970 Mini ITX Overclocked 4GB video card is priced at $312.99 shipped and this card is $649. Getting 30% more performance for more than doubling the price point is going to get a bunch of people fired up. If the AMD Radeon R9 Nano was priced at $399 it would be much more appealing gamers, but it isn’t and you have to keep in mind that it’s the full Fiji GPU.

You can find a gallery of the AMD Radeon R9 Nano below that has a dozen images of the cards in it.

Does the positioning of this card against the NVIDIA GeForce GTX 970 mITX and the $649 price point make sense to our readers? It looks like a very interesting card for those looking to build a powerful HTPC or mini-ITX PC and we’d love to hear from you!