To get a better idea of why there is a difference between the AMD Radeon R9 290X press sample that we were sent and the Sapphire Radeon R9 290X retail card that we got from Newegg we used GPU-Z and started logging everything that we did on the two cards. Both cards were tested with AMD Catalyst 13.11 beta 9.4 drivers. When we first started we were doing this on six game titles, but the number of log files and benchmark results was getting a bit crazy as there were hundreds of logs and all the results were basically the same. At the end of the day we picked Battlefield 4 to use as an example as it is a hot game title and it shows what it going on. We’ll be testing with the ambient case temp at 18C, 27C and 33C to show you what is happening with these two cards at various temperatures. We used the latest build of FRAPS to record 90 seconds of Shanghai level of BF4. 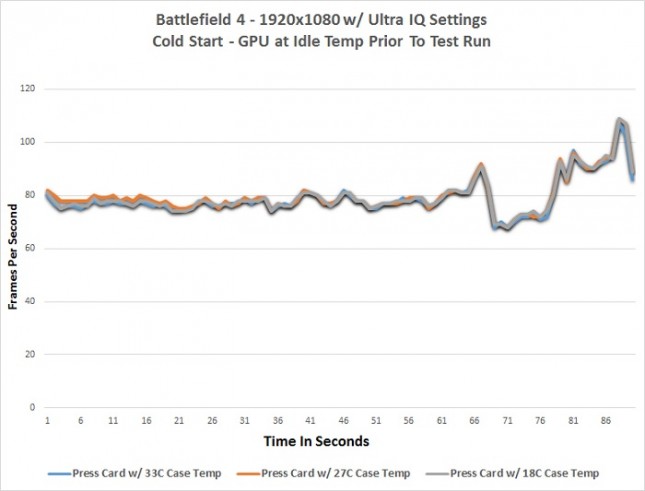 No huge difference here on the AMD Radeon R9 290X press sample card as all of the runs averaged right around 80FPS over the duration of the 90 second benchmark run. 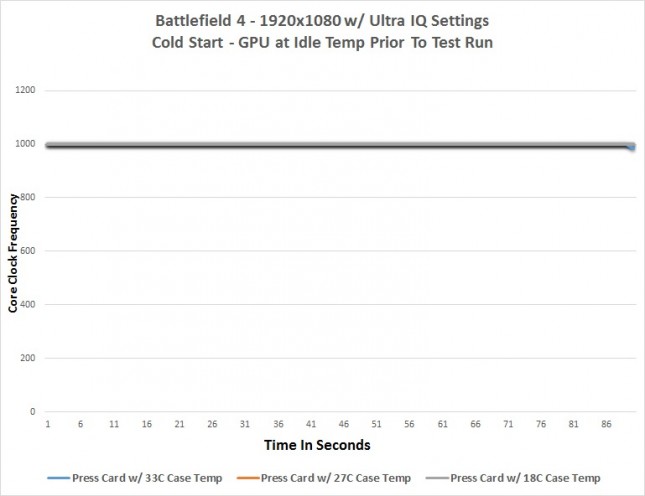 This is a chart of the GPU core clock speeds of the AMD Radeon R9 290X press sample. As you can see with the video card ‘cold’ that the internal case temperature didn’t really matter as the press card was pegged at 1000MHz for the full 90 second run. If you look very closely you’ll see a bit of blue at the 90 second mark as the press card in the hottest of the three cases started to throttle the core clock back at the end of the run. 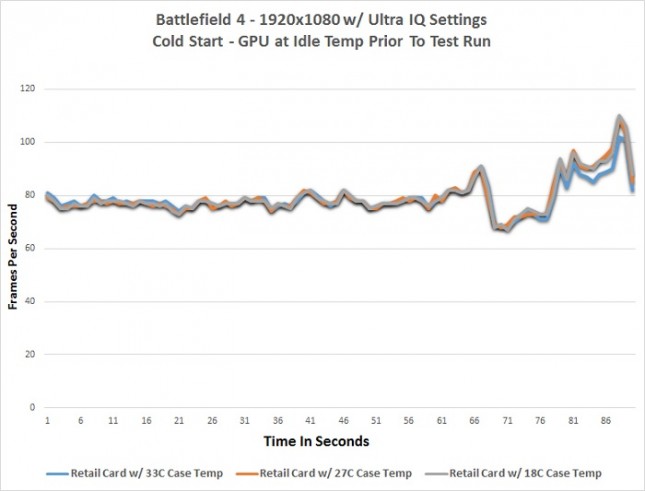 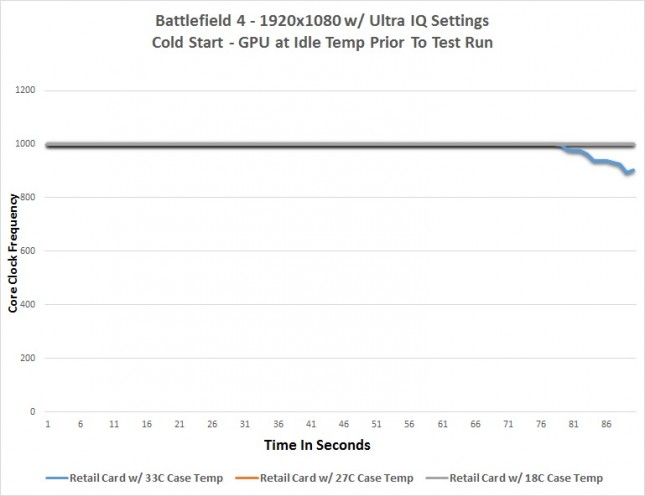 The Sapphire Radeon R9 290X retail card appeared to run the same and was pegged at 1000MHz for the lower two temperature tests, but we found that the retail card started to throttle faster than the press card for some reason in our hottest test scenario. We repeated the test multiple times and the result was always the same. You can see in the FPS chart that the performance starts to drop below the other test runs due to the lower clock speeds. 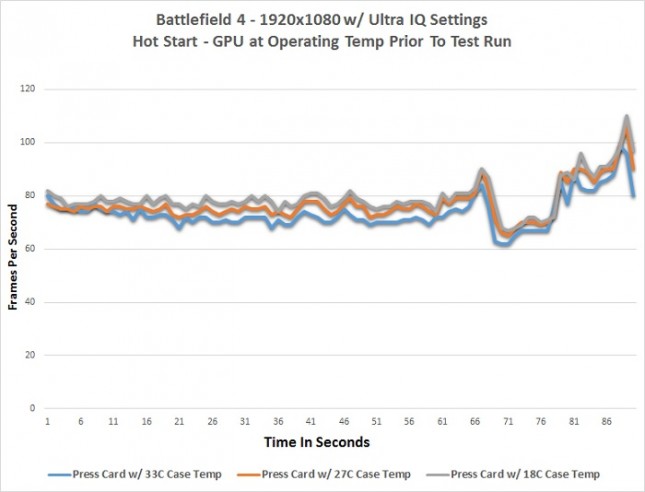 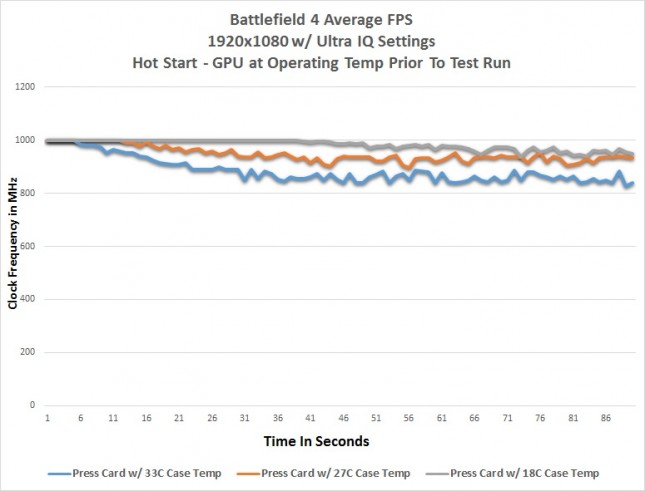 Next we wanted to test the cards from a hot start. This means that we played BF4 for about 20 minutes on the AMD Radeon R9 290X to heat it up to it’s full operating temperature which is a toasty 94C. The AMD Radeon R9 290X press sample runs at the max clock speed of 1000MHz for nearly 45 seconds on the system with the coolest ambient temperature, but only maintained that speed for 12 seconds at 27C and for 4 seconds at 33C. As you can clearly see there is a significant difference between benchmarking the Radeon R9 290X in a ‘hot’ and ‘cold’ state and the ambient room/case temperature also plays a huge roll. 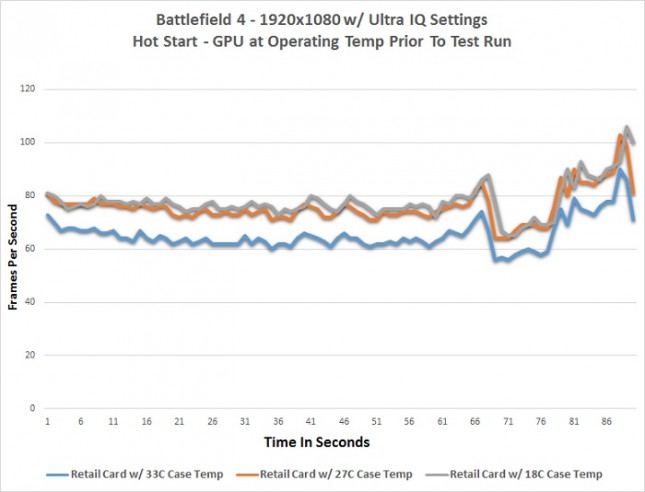 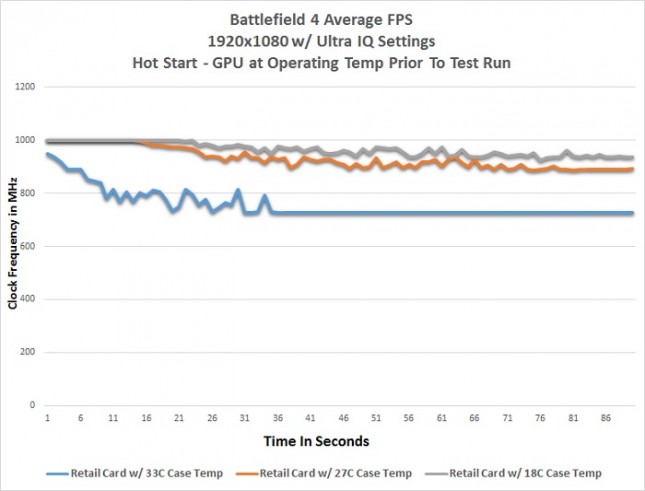 When we ran the same test on the retail Radeon R9 290X from Newegg we saw similar performance decreases again, but they were much more drastic. The retail card was able to hold 1000MHz for 22 seconds with an 18C case temperature, 12 seconds at 27C and it was never able to run at 1000MHz inside the case at 33C. In fact, after 33 seconds the card bottomed out at 727MHz for the remainder of the benchmark and during our benchmark run. 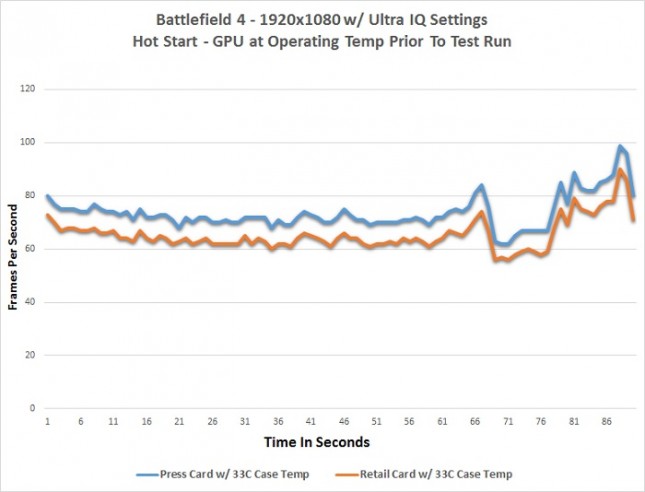 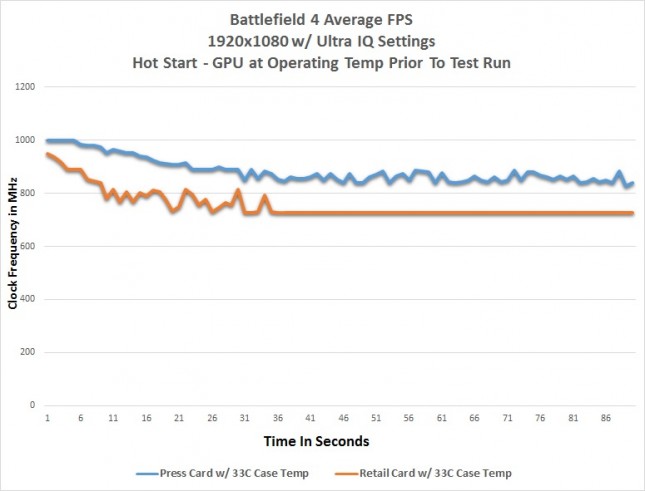 So in our worst case scenario the AMD Radeon R9 290X press card and retail card showed clear signs of throttling when things got warmer, but they weren’t close to being the same. Our test results from the chart above showed the press card averaged 880.86MHz over the course of the benchmark run versus just 752.95MHz on the retail card. This makes the retail cards clock speed roughly 14.5% lower than the press card in the same system with the same ambient temperature.

So, there is a clear difference between the press card that we were sent and the retail card when it comes to real world performance after the card heats up and is run in a warm system. Both cards are virtually identical, so this could mean that AMD cherry picked press sample boards or that there is a huge variance between cards. It was then that we noticed both cards were running different BIOS versions.