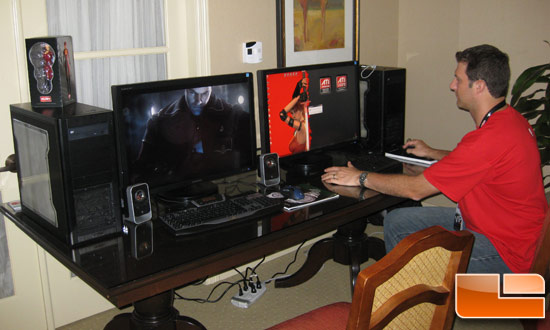 AMD invited Legit Reviews up to their private suite in the hotel that Quakecon 2009 is being hosted at for a first look at gaming on one of their upcoming DirectX 11 graphics cards. This graphics card has not been officially named yet, but it has the internal code name of ‘Evergreen’ and was first shown to the media back at Computex over in Taiwan earlier this year. Once we arrived in the AMD suite we were introduced to not one, but two systems running DX11 hardware! One system was setup running a bunch of DX11 SDKs and the other system was running the demo for the upcoming game title Wolfenstein. The Wolfenstein video game demo uses just DX9, so it really doesn’t show off DirectX 11 performance or functionality, but it does show that the GPU is up and running. 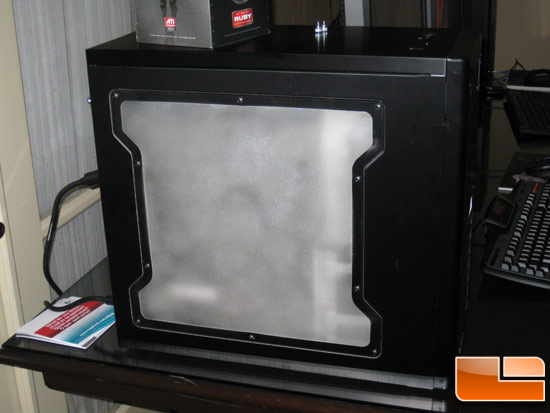 We begged and pleaded with AMD to open up the side panel so we could take a peak at the ‘Evergreen’ video card, but were quickly shut down and said we didn’t have a chance of seeing it. The side window of the case was covered up using spray adhesive and nothing could be seen from the side panel. 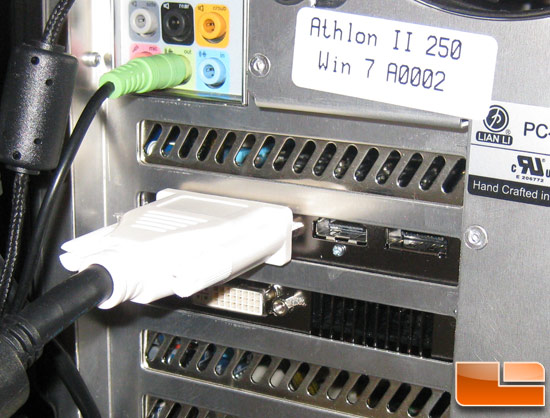 Taking a look at the back of the case though we can see that the DX11 ‘Evergreen’ graphics card is a dual slot solution. For hooking up monitors the card has a has a pair of dual DVI outputs and then both DisplayPort and HDMI connectors. There is also an exhaust port on the back for what could be an outside thermal exhaust system. This is one of the only pictures of this elusive video card on the web! 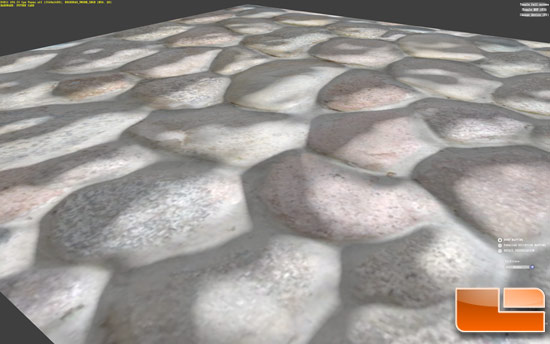 AMD had five or six SDK demonstrations that showed off the power and features of this new DirectX 11 graphics card. One of the demonstrations that best shows the differences would be their main tessellation demo. This SDK has three different rendering mode and the most basic of these modes is bump mapping. Bump mapping is a computer graphics technique to make a rendered surface look more realistic by modeling the interaction of a bumpy surface texture with lights in the environment. Bump mapping does this by changing the brightness of the pixels on the surface in response to a heightmap that is specified for each surface. On the DirectX 11 graphics card running D3D11 at 2560×1600 the framerate was observed at 494 frames per second (FPS). 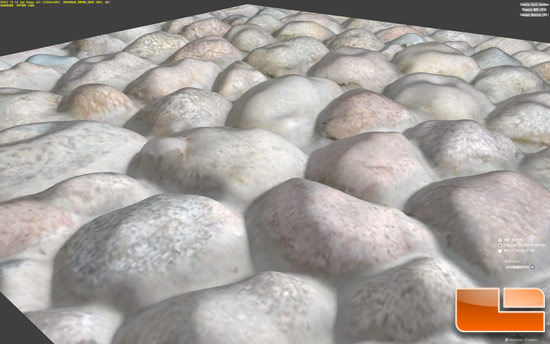 The next rendering mode was Parallax Occlusion Mapping (also called offset mapping or virtual displacement mapping), which is an enhancement of the bump mapping that looks much better visually as you can see from the screen shot above. On the DirectX 11 graphics card running D3D11 at 2560×1600 the frame rate was observed at 72 frames per second (FPS). 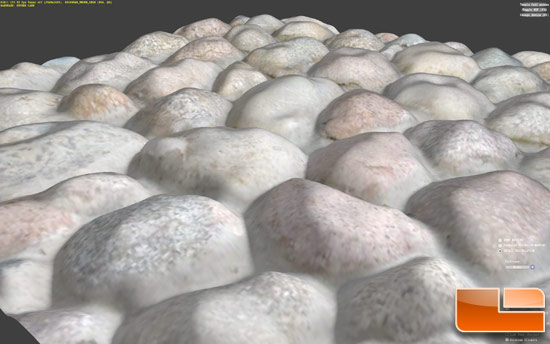 The best looking rendering mode was Detailed Tessellation (tiling) of the scene, which basically adds to the wire frame of the image to fill in the plane figures that fills the plane with no overlaps and no gaps. By doing this it really fills in the voids and the outside of the plane no longer looks square. This rendering mode looks the best and on the future DirectX 11 graphics card running D3D11 at 2560×1600 the frame rate was observed at a cool 173 frames per second (FPS). Not bad as that is more than double what we observed on Parallax Occlusion Mapping, but with better performance.