Vulkan is the new generation, open-standard and cross-platform API for high-performance graphics that promises to end the software bottlenecks and unleash a new, rich visual gaming experience. Vulkan gives unprecedented access to all of the systems resources, which removes a lot of graphics driver overhead that which lead to higher CPU overhead and sub-optimal hardware utilization for years. This means that Vulkan will offer less latency and overhead than OpenGL or Direct3D thanks to the efficient CPU multi-threading capability of the API. 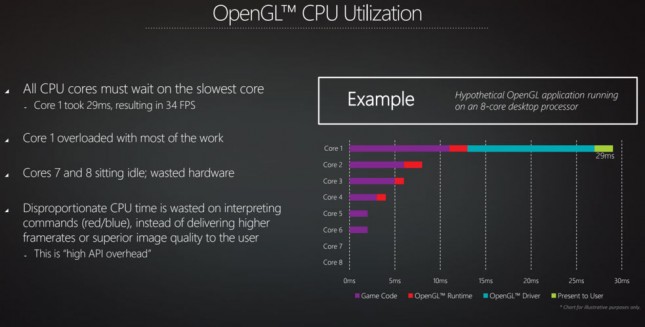 The example in the slide above shows an OpenGL application running on a PC with an 8-core desktop processor. The first core is loaded up with work and takes 29ms to compute what is needed while some of the cores remained idle. The result is a 34 FPS output.

On the same system running a Vulkan application the same workload took just 15ms to complete and that results in 66 FPS. This is because the developer is in control of the systems resources and can take advantage of the mulitple CPU cores by letting their application run multiple command buffers on different cores as well as have better access to the systems memory allocation.

Both AMD and NVIDIA have both relased Vulkan 1.0 launch day drivers. Those would be NVIDIA GeForce 356.39 Beta and AMD Radeon Software Beta for Vulkan video card drivers. We were shocked to see that only NVIDIA has a fully conformant implementation of the Vulkan API with their drivers though as Vulkan 1.0 descended from AMD Mantle. NVIDIA claims that they have the widest range of Vulkan drivers in the industry across multiple product families (GeForce, Quadro, and Tegra) on multiple platforms (Windows, Linux and Android for all Kepler and Maxwell-based GPUs). AMD informed us that they began working on this project in June of 2014 when AMD submitted the XGL proposal based on what they did with Mantle to the Khronos Group. AMD also told Legit Reviews that while their current Beta drivers have yet to pass the Kronos Conformance Test Processor that a forthcoming Radeon Software release would be. You can see a list of Intel and NVIDIA conformant products here.

The release of the Vulkan 1.0 specification is a huge step forward for developers. The Vulkan API, which was derived from Mantle, will bring the benefits of low-overhead high-performance Graphics API to the benefit of cross-platform and cross-vendor targeted applications, said Raja Koduri, Senior Vice President and Chief Architect, Radeon Technologies Group, AMD. The promotion of open and scalable technologies continues to be the focus at AMD, as a pioneer in the low-overhead API space. As a member of the Khronos Group, AMD is proud to collaborate with hardware and software industry leaders to develop the Vulkan API to ignite the next evolution in PC game development. 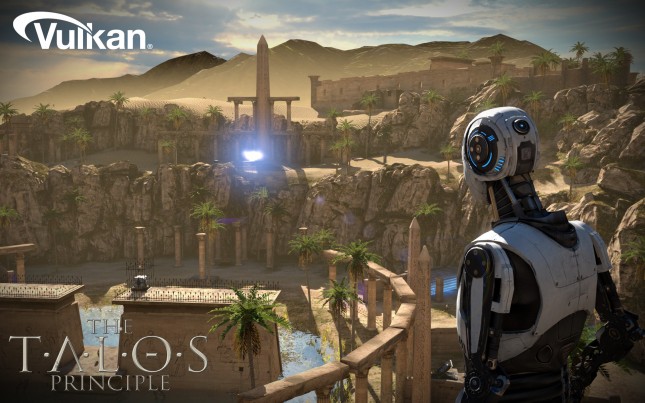 NVIDIA GeForce and AMD Radeon gamers can now play the Vulkan version of The Talos Principle, a puzzle game from Croteam that had a Vulkan version released available today.

Weve successfully collaborated with the NVIDIA driver support team in the past, but I was amazed with the work they did on Vulkan, said Croteam Senior Programmer Dean Sekuliuc. They promptly provided us with the latest beta drivers so we were able to quickly implement the new API into Serious Engine and make The Talos Principle one of the first titles supporting Vulkan. Smooth!

Most big name game engine developers will be using the Vulkan API and many will be porting CPU bound game titles over to Vulkan from OpenGL if they feel the benefits are great enough. 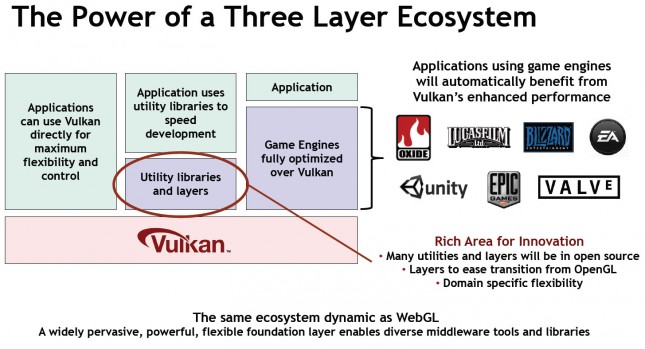 We’ll leave you with a video by AMD titled ‘AMD Simplified: Vulkan API’ on AMDs YouTube channel that gives you a quick overview of the API.