On February 1, 2014 AMD released the first public beta of the Catalyst 14.1 drivers as Beta 1.6 with Mantle support. Previously we tested Beta 1.5 drivers, and found it increased the performance of Battlefield 4 by 15.8% on a Sapphire Radeon R7 260X video card. As this is a new build, we wanted to do some additional testing, focusing on how well Mantle works with both video card and processor overclocking. The percent performance increase from DirectX to Mantle varies greatly and depends on the video card that you are using. AMD provided us with a slide that shows performance of four discrete graphics cards on the AMD A10-7700K processor and the performance gains ranged from just around 6% on the AMD Radeon R9 270X to over 40% on the AMD Radeon R9 290X. We’ve been testing with an AMD Radeon R7 260X due to the affordability of the card and the fact that many gamers are using it since it supports both AMD Mantle and TrueAudio technologies. 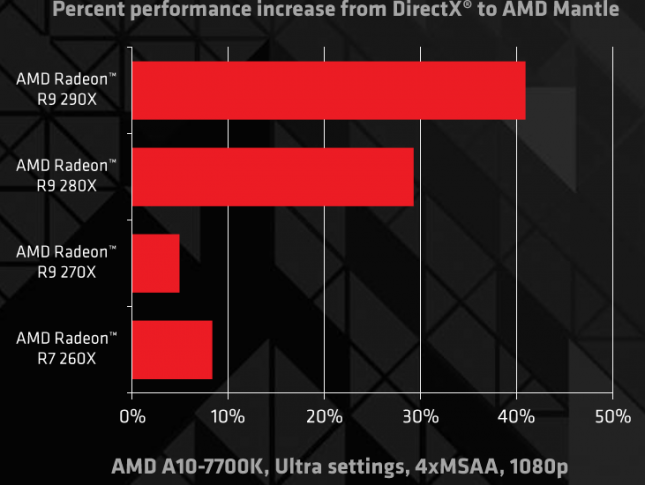 Currently there are only two ways to test the AMD Mantle API. You can use the latest build of the highly popular Battlefield 4 game title or there is a new synthetic benchmark called Star Swarm that is now available to download and use. We tried both benchmark options out on what we consider a mainstream gaming platform (Intel Core i5-3570 Ivy Bridge Process w/ a Sapphire Radeon R7 260X 2GB video card).

Lets see how the number increase as we begin overclocking the CPU and GPU.