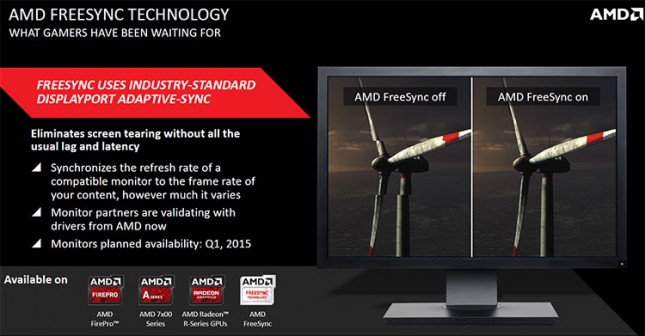 We just heard from AMD that they will be releasing an AMD Catalyst graphics driver on March 19, 2015 that is AMD FreeSync compatible! We weren’t told when you’ll be able to buy an AMD FreeSync monitor in the United States though, but we have hopes that gamers will be able to buy them in North America soon. If you are running an AMD CrossFire setup it looks like those drivers are a bit tricker to make and you’ll have to wait until April 2015 for a driver that enabled AMD FreeSync technologies. AMD is very close to having variable refresh rates!

Here is the quote we were given from AMD.

“AMD is very excited that monitors compatible with AMD FreeSync™ technology are now available in select regions in EMEA (Europe, Middle East and Africa). We know gamers are excited to bring home an incredibly smooth and tearing-free PC gaming experience powered by AMD Radeon™ GPUs and AMD A-Series APUs. We’re pleased to announce that a compatible AMD Catalyst™ graphics driver to enable AMD FreeSync™ technology for single-GPU configurations will be publicly available on AMD.com starting March 19, 2015. Support for AMD CrossFire™ configurations will be available the following month in April 2015.”