In a recent interview with Forbes, VP and General Manager of AMDs Graphics Business Unit, Matt Skynner, confirmed a couple details about the upcoming next-generation enthusiast level GPU from AMD. He confirmed that new graphics cards using the Hawaii architecture will be released in Q4 2013 and they will be priced in-line with the cards that are on the market today. He also noted that the cards will be made using the 28nm process node and will be extremely efficient, with the die being 30% smaller than the NVIDIA Kepler GK110 GPU. The approximated die size of the NVIDIA GK110 GPU is said to be around 550 mm, so that means Hawaii could be around 385 mm. The AMD Tahiti GPU used on the AMD Radeon HD 7970 measures 365 mm, so it appears that the GPU die size will be larger.

Here are the comments made by Matt Skynner:

Theyre coming in Q4. I cant reveal a pricepoint but were looking at more traditional enthusiast GPU pricepoints. Were not targeting a $999 single GPU solution like our competition because we believe not a lot of people have that $999. We normally address what we call the ultra-enthusiast segment with a dual-GPU offering like the 7990. So this next-generation line is targeting more of the enthusiast market versus the ultra-enthusiast one.

Its also extremely efficient. [Nvidia’s Kepler] GK110 is nearly 30% bigger from a die size point of view. We believe we have the best performance for the die size for the enthusiast GPU.

Another thing I can tell you is about the process node: this GPU is in 28nm. Some have speculated that it was 20nm and its not for a specific reason: At 28nm for an enthusiast GPU, we can achieve higher clock speeds and higher absolute performance.

AMDs new GPUs featuring the Hawaii architecture should debut at the AMD GPU 14 Tech Day next week in Hawaii. The event takes place on September 25th, 2013 at 3 pm EDT and will be live streamed online. The AMD Hawaii GPU and Volcanic Islands family are going to be using a new naming nomenclature called the R-200 series, so be sure to read up next week! 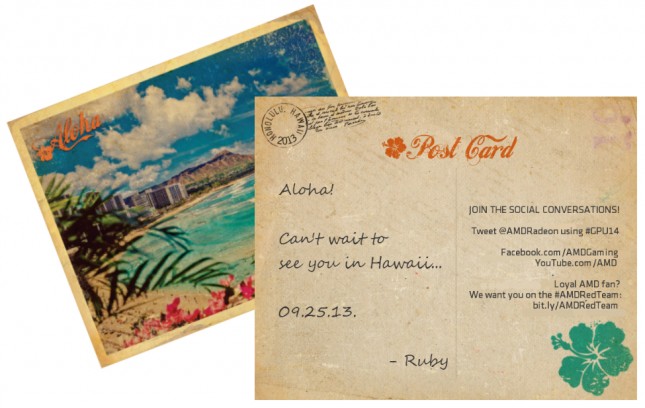