Last week we brought you a peak at of AMD’s first ever APU (CPU+GPU) and showed you a little bit about the upcoming ‘Fusion’ family of Accelerated Processing Units. We told you that we got some hands-on testing with a Fusion APU system and today we finally get to show you some of those performance numbers. The platform that we got to see and actually use is a Brazos platform
with the AMD Zacate 18W max TDP processor. 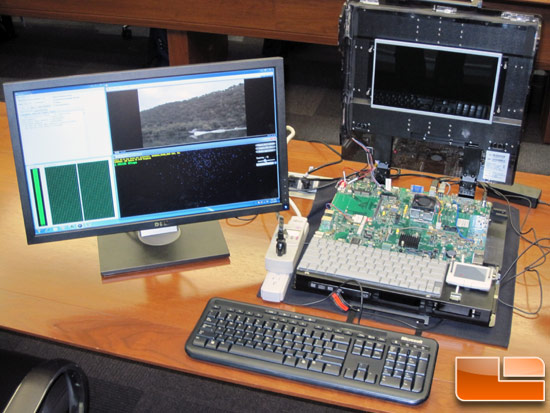 The specific processor that we got to
use was the AMD E-350 with AMD Radeon HD 6310 Graphics (dual-core CPU @ 1.6GHz & DX-11 SIMD @ 500MHz). AMD believes that computing is moving to the Heterogeneous-Core Era and that their Fusion family of processors are the right processor for today’s computing needs. AMD Fusion is a new approach to processor design and software
development, that combines CPU and GPU capabilities for HD, 3D and
data-intensive workloads into a single-die processor called an
Accelerated Processing Unit (APU). APUs combine high-performance serial
and parallel processing cores with other special-purpose hardware
accelerators, enabling improved performance when it comes to visual
computing, security, performance-per-watt and device form factor.

AMD showed their heterogeneous idea in motion in the video clip above thanks to an AMD E-350 APU with AMD Radeon HD 6310 graphics on-board. The demo shows the 1.60GHz APU running Hyper-Pi 32M at 100% load on both x86 ‘Bobcat’ CPU cores, a high-performance
computing application on the GPU compute engine and the 3rd Generation Unified Video Decoder (UVD) playing 1080P video content all at the same time without having any stutters or issues. Not bad for a notebook platform that should be under $500. This looks like an impressive platform, but let’s take a look at what we could do.