Last week, Intel released 4th Generation Core “Haswell” processors and this week we have AMD releasing the company’s 3rd generation of APUs, known as “Richland.” AMD “Richland” APUs are said to bring 20-40 percent performance increases over the previous generation of AMD A-Series “Trinity” APUs, so AMD fans have been waiting months for this day to come. The other nice thing about these new APUs is that they don’t require a new platform and work in all existing AMD Socket FM2 motherboards after a quick BIOS update.

It has been three years since AMD launches the Accelerated Processing Unit (APU) and the they have progressed nicely since a rather bumpy launch. The AMD Llano APU was a nice processor on the FM1 platform, but there was no upgrade path for the platform and the socket was essentially dead from the get go. Last years AMD Trinity APU brought significant performance gains along with the new FM2 platform, which thankfully can support both Trinity and Richland! It’s always good when your socket design can last for more than one generation! The AMD Richland APU uses “Piledriver” 32nm HKMG process cores (up to 4 cores), up to 128 KB L1 Cache (64 KB Instruction, 64 KB Data), Up to 4 MB L2 and 2 x 128-bit FPUs / compute module. The 32nm processors are available in 65W and 100W configurations and have a die size of 246mm2 with 1.3 billion transistors. AMD Turbo Core 3.0 has taken the increased the boost frequency from 4.2GHz from the last generation Trinity APU to 4.4GHz with Richland. Richland supports the latest ISA instructions including FMA4/3, AVX, AES, XOP. Basically you get the latest Piledriver cores along with VLIW4 GPU architecture. The end result is up to 779 GFLOPS on OpenCL Apps. Here are the details of the five Richland APUs that will be available at launch. The AMD A10 series quad-core processors have 384 Radeon cores clocked at 844MHz and 4MB of total cache. Richland has a 44MHz speed bump on the Radeon Cores over the previous Trinity APUs! The AMD A8 series are also quad-core processors with 4MB cache, but have just 256 Radeon cores and the speed on them drops to just 800MHz on the A8-6500. The AMD A6 series consists of the A6-6400K, which is a dual-core part with just 1MB cache and 192 Radeon cores running at 800MHz. Notice that just the AMD A10-6800K, has been validated and certified for use with DDR3-2133MHz memory. The other Richland APUs officially support just 1866MHz memory kits. Memory plays a critical role on AMD APU’s and can dramatically improve your user experience by using the highest supported memory kit. The AMD A10-6800K Richland APU is the first AMD APU to ever officially support DDR3 2133MHz dual-channel memory. AMD says that you get a 9-12% performance boost in popular game titles when you run 2133MHz versus 1600MHz, so be sure to buy the fastest memory kit possible. For the AMD A10-6800K we recommend 2133-2400MHz. Our AMD A10-6700 Richland APU won’t run 2133MHz with full stability, which is odd, so 2133MHz is going to be hit or miss on the A10-6700. It doesn’t officially support it, but not every processor is going to be able to run it out of the box.

The new AMD APU’s also now come with a software bundle thanks to the AMD Elite Experience Program! The AMD A10 APU product line is available with a game title from AMD’s Never Settle Game Promotion and a suite of new apps that is being released for the very first time. The game title that will be included with AMD A10 series APU’s here in North America is Tomb Raider, so if you spend $142 on the AMD A10-6800K or the A10-6700, you get a game title that normally sells for $40 on Amazon. The other software features are AMD Gesture Control, AMD Screen Mirror, AMD Quick Stream Technology, AMD Face Login, AMD Steady Video and AMD Perfect Picture HD. The summary on those applications are below. 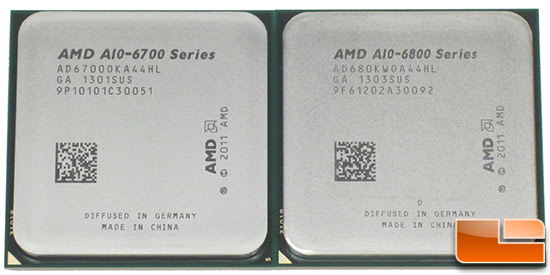 AMD sent over the A10-6700 and A10-6800K “Richland” APUs to try out and those are going to be the processors we will be looking at closer today!