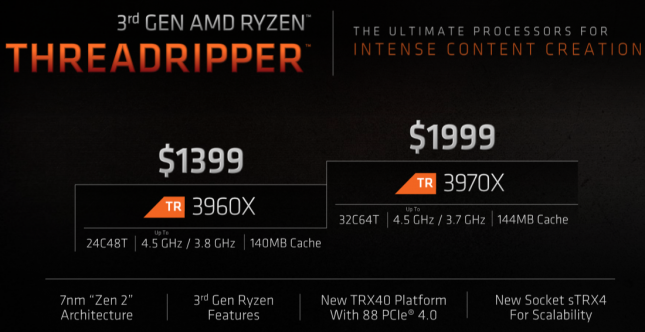 So, the 3rd Gen AMD Ryzen Threadripper starts out with the 3960X 24-core, 48-thread processor with 3.8 GHz base and a 4.5 GHz max boost clock. That is a really high base clock on a part that has so many cores! The 3960X is topped off with 140 MB of cache, which is a colossal amount of cache for the ‘entry level’ Threadripper part.

The flagship part for this generation right now is the Threadripper 3970X and it has 32-cores and 64-threads. It has a slightly lower base clock of 3.7 GHz, but maintains the same 4.5 GHz max boost clock that the 3960X has. This CPU has 144MB of cache and is aimed at those looking for most cores and cache possible.

The good or not so good news here is that AMD is introducing a new TRX40 platform for 3rd Gen Ryzen Threadripper. This was because AMD needed a new socket (sTRX4) for scalability as AMD basically doubled number of PCI lanes to the chipset and they are also doubling that bandwidth by moving to PCIe Gen 4.0. So, AMD is actually quadrupling the bandwidth between the chip and the chipset on this new platform by moving from PCIe 3.0 x4 on the X399 chipset to PCIe 4.0 x8 on the TRX40 chipset. That is a massive improvement and Legit Reviews has a feeling that the TRX40 platform is going to be breaking every storage performance record once this platform is released! 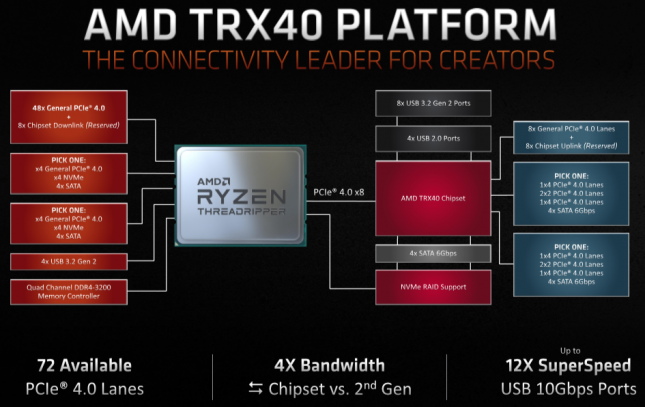 The new TRX40 platform supports 88 PCIe 4.0 lanes, but that is only if you count everything coming off the processor and the chipset. The actual total usable lanes for the consumers would be about 72 PCIe 4.0 lanes. Those are all direct to CPU for the lowest latency and the highest possbile bandwidth. AMD also now offers 12 SuperSpeed USB 10 Gbps ports that directly off the TRX40 chipset, which is great. 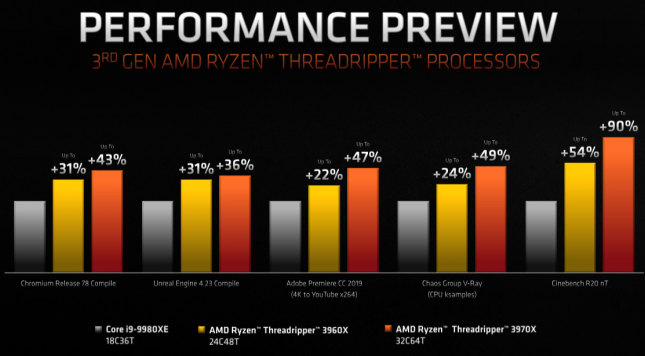 When it comes to performance the only slide that we were given is the one above. It shows off performance on five different applications/benchmarks with the AMD Ryzen Threadripper 3960X and 3970X against the Intel Core i9-9980XE. AMD clearly dominates as they are going up against an Intel part that had just 18-cores and 36-threads, but that is where the core battle is at today.

AMD told Legit Reviews that the new 3rd Gen Ryzen Threadripper CPUs are really fast parts that truly sit on top of what Intel can offer.

On our call with AMD this one quote really stuck in our heads.

“We are in the plus $1,000 market by ourselves now, Intel has nothing that can possibly fight us. It’s a really, really fun place to be in 2019 and 2020.” Don Woligroski – AMD Desktop Processor Technical Marketing Manager

Let that sink in for a minute! We’ll have our review up on these new parts later this month!