Ford Performance has released a video that shows an all-electric pony car drag race.. Ford Performance says both vehicles happened to be at the track at the same time, so they decided to pit them against each other in a race.

The Mach-E 1400 has three electric motors in the front and four in the rear, making 1400 horsepower. It also has lots of aero producing over 2300 pounds of downforce at 160 mph. Downforce isn’t necessarily your friend on the dragstrip as it creates drag slowing the vehicle down. 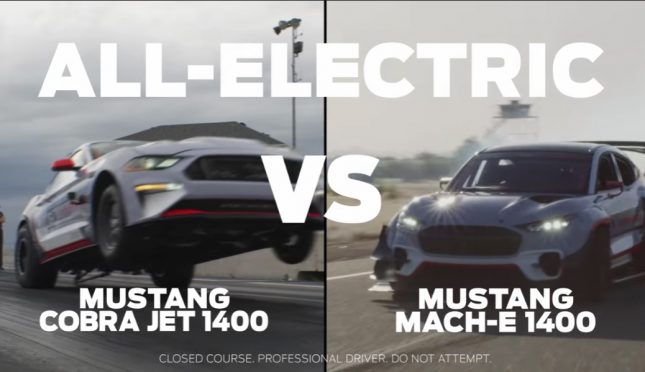 The Mustang Cobra Jet 1400 is an electric drag racer designed specifically for the quarter-mile. It has the same 1400 horsepower and makes 1100 pound-feet of torque going to the rear wheels. Ford Performance has covered the quarter-mile in the low eight-second range at over 170 mph in the past.