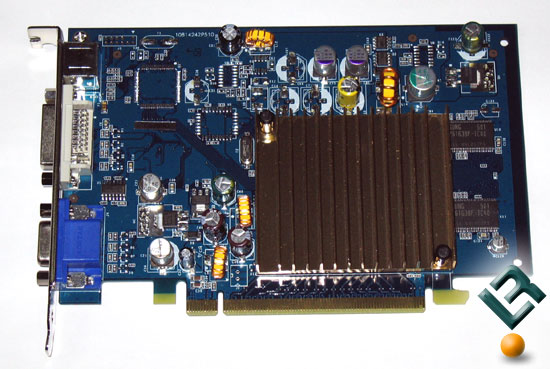 After the initial release of PCI-Express one of the largest complaints was the lack of decent video options. Consumers were left choosing between last years technology slapped together with a bridge chip or the ultra high-end graphics cards that were $300 or more. nVidia has stepped in and offered entry level cards based on the latest and greatest technology now with their introduction of the gForce 6200 Turbo Cache line of video cards. To help us get an idea of this cards abilities nVidia was nice enough to send us the Albatron TC6200Q, this little card comes packed with a lot of features you find on big brothers list, but at a much smaller price tag.

nVidia?s goal with the Turbo Cache was to bring the latest generation of graphics to the entry level market. They wanted to do this while not entirely sacrificing the power of the 6xxx series chips. To cut back on cost nVidia had to do some smart engineering, as well as cut back on some of the features. Some of the obvious ones are things like SLI, and either 16mb, 32mb, or 64mb of on board memory. The memory interfaces are also slowed down using either 32bit or 64bit wide bus, which does limit the available bandwidth on these cards. To further reduce cost nVidia and Albatron use standard DDR1 for the memory rather than the expensive GDDR3 used in mainstream and high-end cards. Now I?m sure your reading this thinking, ?why the hell would I want a castrated video card?? Guess what nVidia has a few tricks up their sleeves to make this card into a real contender for an entry level video solution. 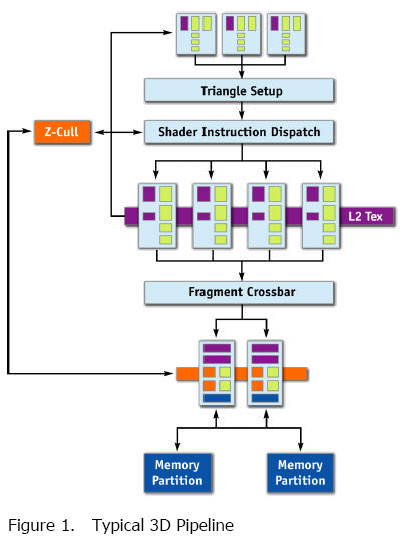 There is nothing wrong with this architecture, until it is restricted by insufficient memory. Modern games require large amounts of onboard memory for the video card to store textures. Games like Doom3, Half Life 2, Farcry, and EverQuest all require a minimum of 64mb of onboard memory, and all seem to run best with 128-256mb of memory. To overcome both the cost difference and the performance difference nVidia added Turbo Cache.

Turbo Cache adds the TurboCache Manager that allows the use of the PCI-Express bus as well as system memory. Wait that sounds like the AGP spec right? Well yes, AGP did specify that the AGP card could use the AGP bus to allocate system memory. This however was generally only used by onboard solutions where video performance was limited to solitaire and office applications. Now with PCI-Express substantially more bandwidth is available for the video card, and nVidia has developed a seemingly efficient way of using it. 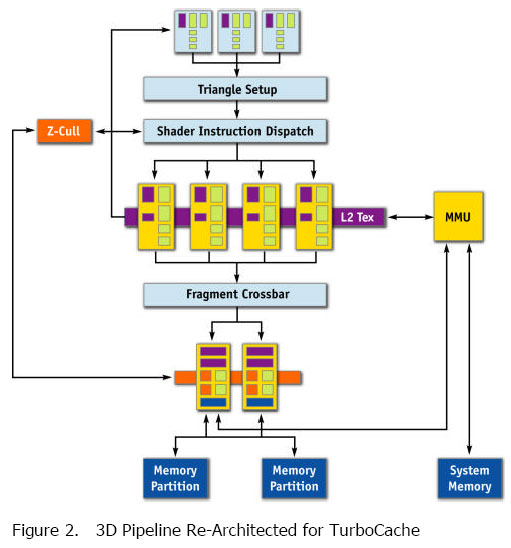 By adding a new Memory Management Unit give the 6 series direct and ?seamless? read and write ability to the system memory. The other parts of Figure 2 shown in yellow were tweaked to help accommodate the added latency of swapping textures from system memory to the GPU. nVidia claims that this process is ?seamless and 100% efficient? I have no way to test these claims but I can tell you that true or not the card does work and uses system memory. I found it very cool when I booted up my system and it immediately reported a 256mb video card even though it only has 64mb onboard.

nVidia also updated the ForceWare drivers for Turbo Cache. This update ensures that the drivers know where data is located between onboard and system memory. They also ensure that memory is used as needed, why partition out 256mb of system memory when you the application does not require it. The drivers therefore dynamically allocate and release based on need.