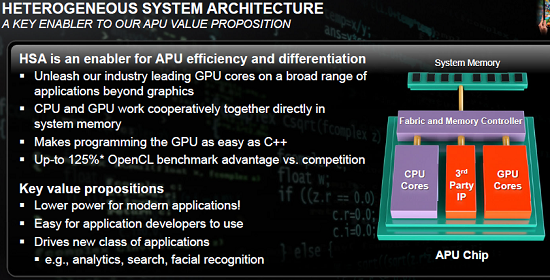 Earlier this year, AMD outlined the companies HSA (Heterogeneous Systems Architecture) roadmap through 2014 and talked about how AMD was fully backing the architecture. AMD firmly believes that the performance improvements offered by heterogeneous compute will be substantial in the years to come and that it is the right direction to take. These performance speedups are expected to be so substantial that AMD believes that they will allow developers to create new features, usage models and user experiences that wouldn’t otherwise be possible.

By combining the CPU and GPU as a unified processing engine is greatly simplifying the programming of heterogeneous platforms. The only downside is that it ill take years to complete and the support of both hardware and software companies to make HSA successful. AMD has developed a roadmap to get to full HSA system integration.

AMD’s ‘LLano’ APU that was released in 2011 is the first processor that starts to adopt this product direction. This year AMD introduced the companies second APU, called Trinity along with Graphics Core Next (GCN). Next year AMD will finish the architectural integration and will create unified address space that both AMD CPUs and GPUs can access. In 2014 AMD plans to deliver HSA compatible GPUs that allow for true heterogeneous computing where workloads will run, seamlessly, on both CPUs and GPUs in parallel. 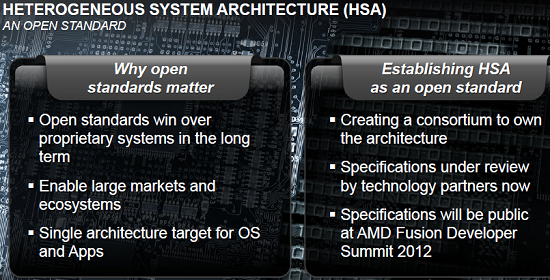 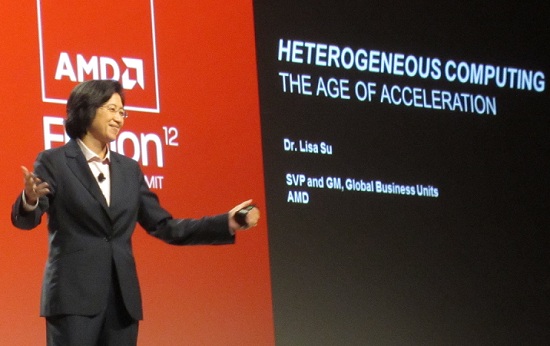 Today at the AMD Fusion Developer Summit (AFDS) it was announced that the Heterogeneous System Architecture (HSA) Foundation was created. 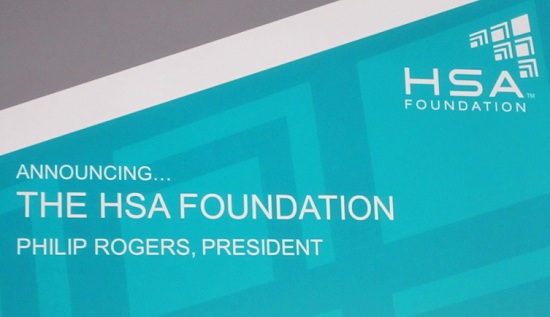 The HSA Foundation is a non-profit group that is being established to develop an open, standards-based approach to heterogeneous computing. The goal of the HSA foundation is to provide a hardware specification that will be uniform and can utilize the same program coding. Ultimately
this will allow software developers to code for one system, and it will be coded for all. This will allow software to be much more optimized than software that has to be capable of running on multiple types of hardware. 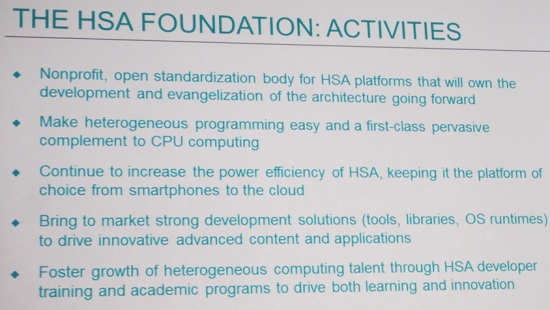 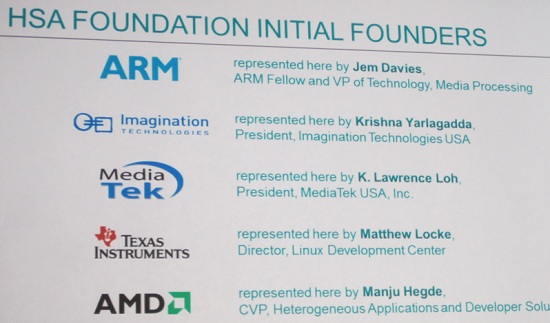 The founding members of the HSA Foundation are AMD (Advanced Micro Devices), ARM, Imagination Technologies, MediaTek, and Texas Instruments. Each of these companies has experience with Heterogeneous processors and will play a key role in making changes to the open standard. 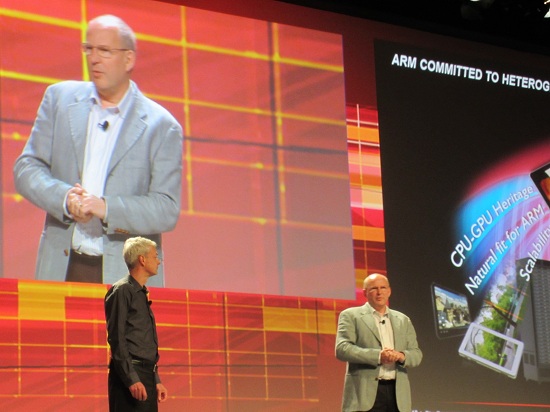 Jem Davies of ARM was one of the speakers during the keynote this morning. He spoke about how ARM is all about low power and that ARM knows that GPUs have a central role in providing highly energy-efficient computing. He also spoke about how HSA will spark momentous changes in the industry. 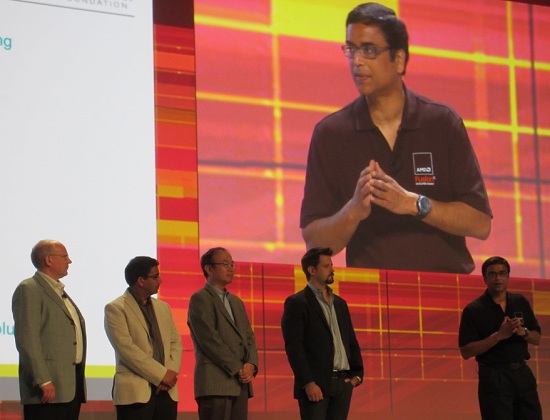 The bottleneck of the APU today is the software and AMD believes that with open standards and a supportive community base that HSA is the way of the future.  The HSA Foundation should grow and continue to add partners that will promote the idea of heterogeneous computing and that is how AMD plans to compete in the years to come.

We will conclude by leaving you with quotes from the five HSA Foundation founding members.

“One year ago, AMD boldly announced a roadmap for making HSA a reality, starting with combining the CPU and GPU as a unified processing engine to create an architecture that would greatly simplify the programming of heterogeneous platforms. Today, we are continuing our heterogeneous computing leadership and dedication to driving broad industry adoption by making the HSA architecture an open standard.”

“We are all demanding more from the technology that connects us to our digital worlds. Graphical interfaces are critical to the user experience but can have a power impact. With open standards, developers can now provide outstanding graphics without compromising power-efficiency. ARM welcomes the formation of the HSA Foundation and is pleased to be one of the founding members. ARM’s extensive experience with heterogeneous systems brings a unique leadership perspective to developing the right compute processor for the right tasks based on the latest ARM technology, such as ARM Mali™ GPUs and Cortex™ processors.”

“Imagination is delighted to be one of the founders of the HSA Foundation. Our long-held view is that heterogeneous processing architectures are fundamental to scalability, flexibility and performance for future SoC (Systems-on-Chip) design. We believe that the combination of CPUs with increasingly powerful on-chip GPUs, using industry standard APIs such as OpenCL, Renderscript Compute, and Direct Compute, is the vital first step along this path. The HSA APIs and tools complement these higher level APIs to help SoC systems engineers create future generation computing platforms. As applications developers embrace the benefits of embracing such architectures, the HSA Foundation will provide a valuable cross-platform, cross-OS means of ensuring maximum heterogeneous application portability and optimization. We look forward to working closely with all of the founders and other members of the HSA Foundation to deliver this key open standard that is set to fuel the future of mass market high performance computing.”

“MediaTek is excited about the potential of heterogeneous computing in enabling innovative mobile applications. We believe that an open standard is key to bringing the technology to the mainstream smartphone market. As a chipset and platform supplier with a strong focus on mainstream smartphones, we are excited to join AMD, our IP partners, Imagination, ARM, TI and other industry leaders to promote HSA as the open standard for heterogeneous computing.”

“TI’s expertise in delivering low-power, high-performance experiences via the smart, multicore architecture of our OMAP platform undoubtedly makes our position as a founding member of the HSA Foundation a natural fit. We look forward to working with other leaders in the industry to drive adoption of heterogeneous computing as a standard platform across embedded, mobile, personal and cloud computing.”