When it comes to memory and storage devices, there are many options to choose from.  While ADATA might not be the first name that comes to mind, it is a company that you should consider.  They have a long history (19 years) of manufacturing memory and various storage devices, constantly at the forefront of technology trends. 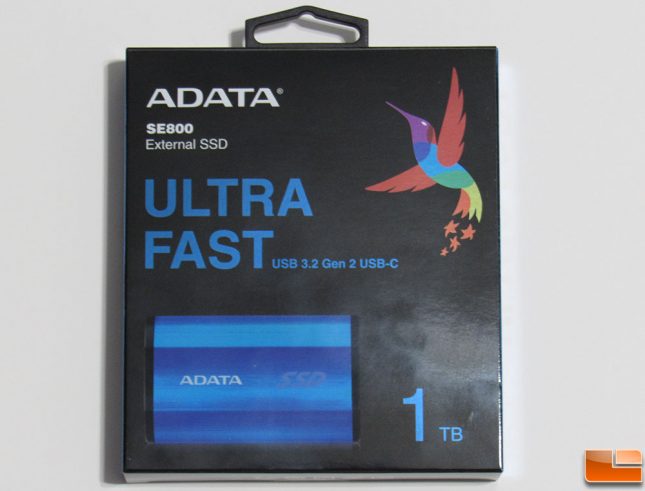 ADATA has provided us their 1TB SE800 External SSD to take a look at. This portable SSD available in both 512GB and 1TB capacities in your choice of black or blue for colors. It uses the latest USB 3.2 Gen 2 USB-C connection (10Gbps) to maximize speed, which is rated for around 1,000 MB/s.  Since it is portable, ADATA has taken the steps to obtain the necessary certifications for dust, water and impact resistance.  Measuring 2.8 x 1.7 x 0.4 inches it is small enough to fit in your pocket, and light enough at 1.4oz to not weigh you down.  Both models come with a three-year warranty, and carries a $94.99 price for the 512GB model, and $189.99 price tag on the 1TB capacity drive.  Let’s take a look at the ADATA SE800 before doing some testing. 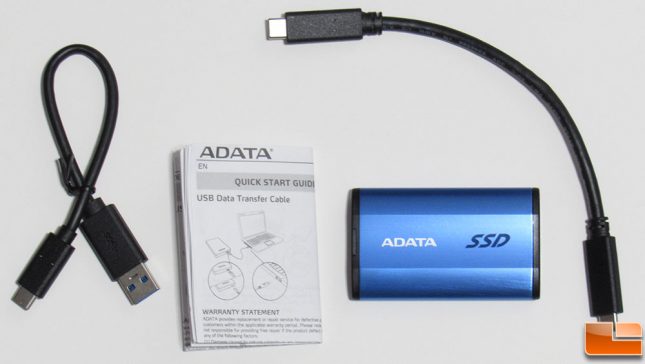 Inside the box there are only a few items.  A short USB-C to USB-C cable, a USB-C to USB-A cable, Quick Start Guide and the SE800. 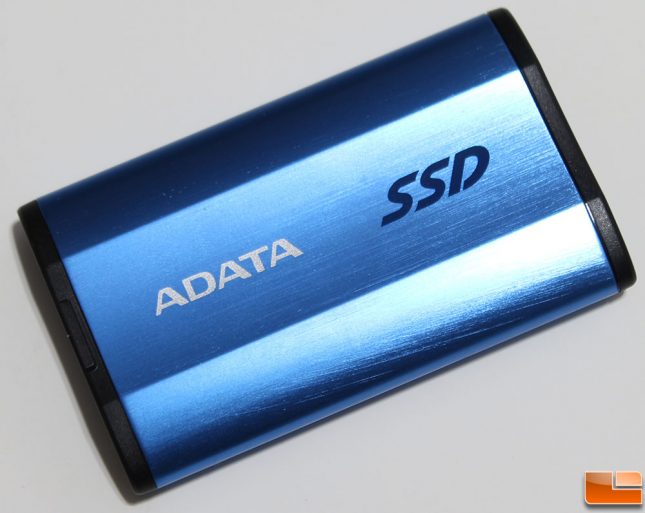 The ADATA SE800 comes in either a black or a blue enclosure.  ADATA sent us the blue model, which looks really nice.  The outside case is a brushed aluminum, which gives it a nice high end look.  While it could be made out of plastic or heavier materials, aluminum is a nice compromise between durability and a “luxury” look. 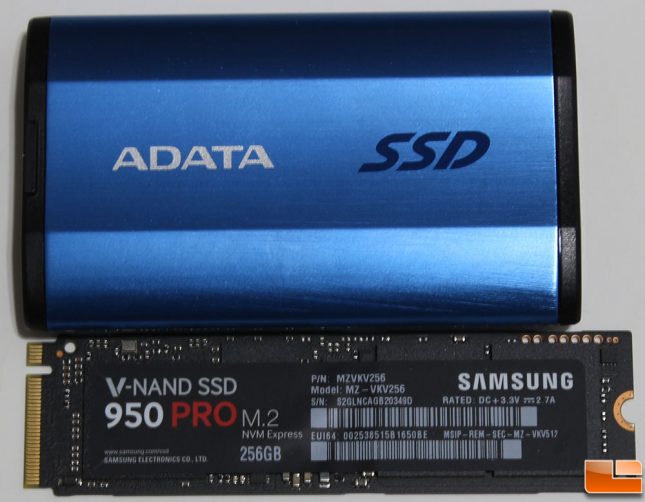 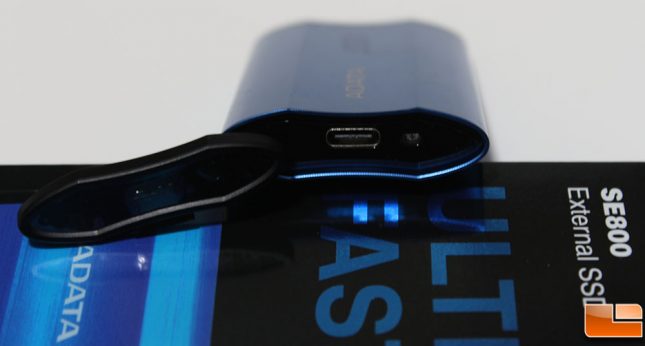 On one end of the SE800, the USB-C port has been covered, which allows the SE800 to meet MIL-STD-810G 516.6 and IEC IP68 standards.  IP68 means that the SE800 can withstand dust and making it able to survive being in 1.5m of water for up to 30 minutes.  While the Mil-STD-810G 516.6 standard which requires the device to be able to survive accidental drops of up to 1.22m (around 4 feet).  So if it drops out of your pocket or gets knocked off a desk it should survive.  Next to the USB-C port is a little activity light.

To verify cross-platform usage, we decided to test functionality on various devices.  For consoles, this included the Xbox One X, and Playstation 4; both devices immediately recognized the ADATA SE800 and prompted to format the drive for your specific use case.  Next the SE800 was connect to a 2019 MacBook Pro running the Mojave OS; once again we were prompted for format the drive for the Mac environment.  In all cases, once the drive was formatted we were free to use it as you would expect within the appropriate system limitations.

No software is provided on the SE800, however ADATAdoes make two packages available to download through their website.  OStoGo and HDDtoGo can be found here.  OStoGo, is an alternative way to install an Operating System without using an optical drive.  HDDtoGo features “No Trace Browsing with IE and FireFox”, folder synchronization, data compression and encryption, along with Favorites synchronization with IE and FireFox.  This is a helpful tool to have if you use multiple PC’s or want to keep your browsing history private.  I like that ADATA makes these available to download rather than being on the SE800. 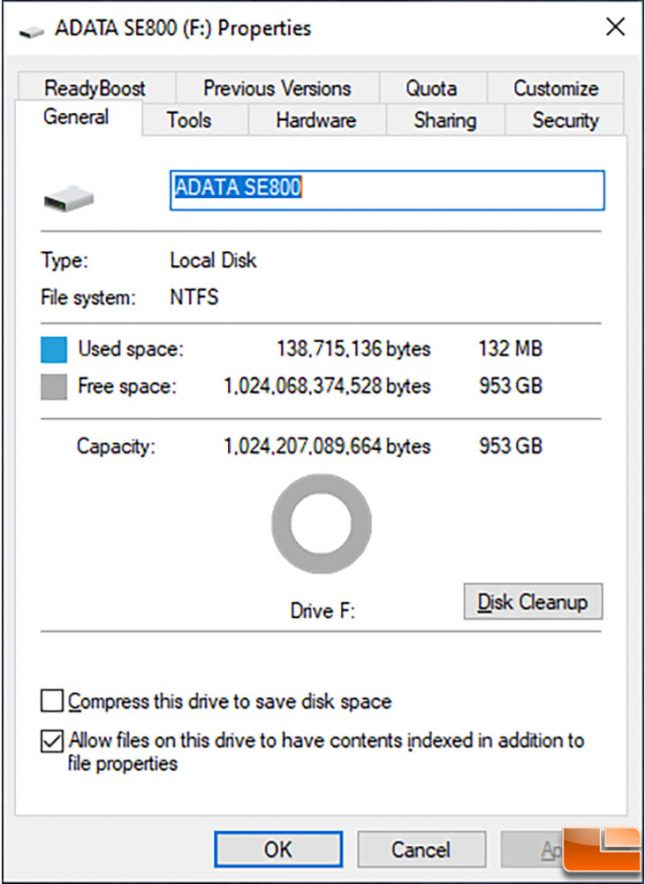 The SE800 comes formatted for the Windows environment as NTFS, which allows it to provide 953GB of space.  As we mentioned before, if you want to use it on a game console or a Mac you will need to format it for that specific environment. 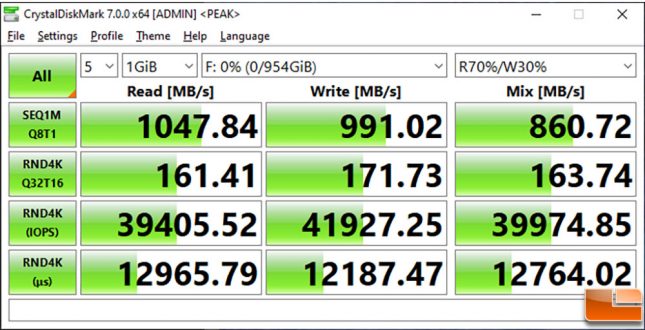 To start the performance testing, we began with CrystalDiskMark 7.0.0 on a Microsoft Surface Laptop 3 running Windows 10 v.1909.  We were able to get a maximum read speed of 1,047 MB/s and a write speed of 991 MB/s.  This is what we would expect, and while the write speed is less than the 1000MB/s ADATA lists for it, it is within an acceptable tolerance range.  Especially if you keep in mind that performance can vary from one system to another depending on the hardware. 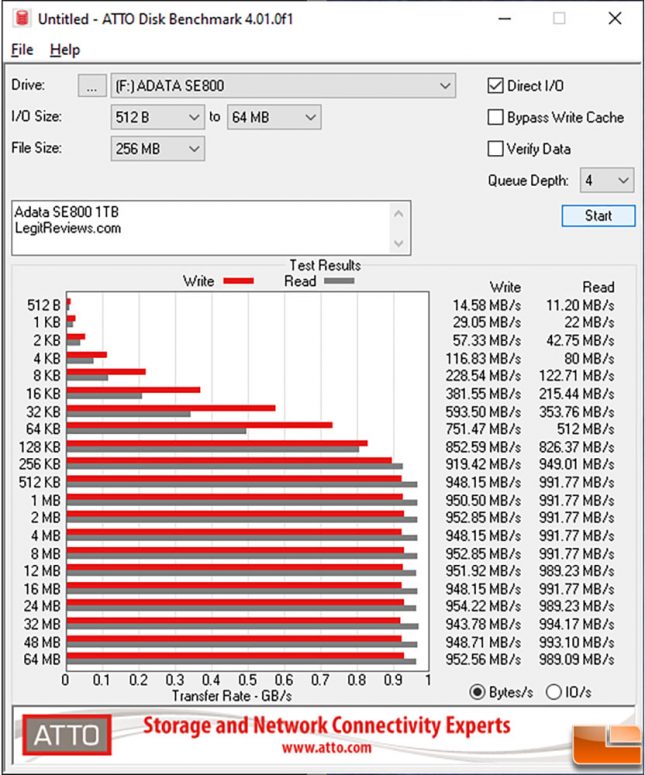 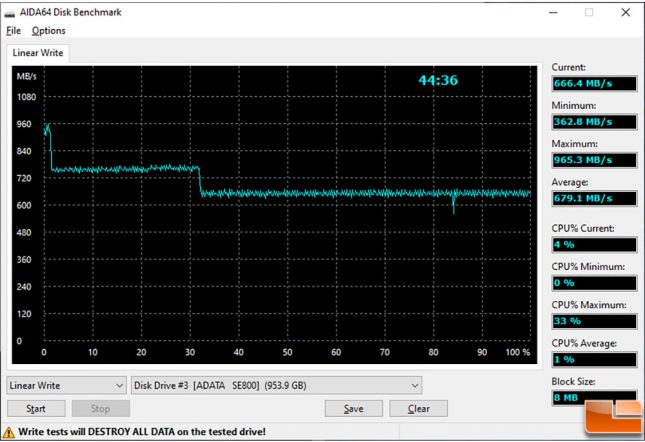 The final test is with AIDA64’s linear write test.  This test writes data to the drive without interruption.  The drive starts out great with a 965MB/s write speed, but quickly drops down to around 750MB/s.  Eventually it drops down to it’s average speed of 679MB/s.  While this is definitely lower than it’s expected speed, unless you are writing huge files to the SE800, you will probably not experience the speed drop; even if you do it’s much faster than most other drives.

While various file types will transfer at different speeds, we transferred a 5GB 4K MKV video file to the SE800 from a Corsair MP510 M.2 drive.  The file transfer took approximately six seconds to copy.  Once we start the file copy, Windows was reporting a transfer speed of 690MB/s and never fluctuated.  Next we transferred 5GB of audio files, this copy took around 12 seconds to copy the 785 audio files, the transfer speed did fluctuate between 450MB/s and 580MB/s, but remained mostly in the mid 550MB/s range.

If you want to have your data portable, the ADATA SE800 is a great choice.  First, your data will be safe thanks to the SE800 having an international standard rating of IP68. This means the external drive has been deemed fit enough to withstand dust, dirt and sand, and is resistant to submersion up to a maximum depth of 1.5m in freshwater for up to thirty minutes. It should also survive accidental drops up to around 4 feet, so this should be robust little storage drive!

Performance of the drive was good as we managed to come close to the drives 1000 MB/s transfer speed rating in the common benchmarks. Transferring data at 1 GB/s is nice and really saves some time for folks that rely on external drives at work or home for file transfers.  Of course the data you are moving to the drive will really impact its performance, as we noticed when we transferred a 5GB video file in six second, compared to 785 audio files of the same size in nearly twice that time.

If you are looking to get the ADATA SE800, you can easily find the 512GB model for $94.99, while the 1TB version will run you around $189.99.  The 512GB model is right in line for what we would expect for a high speed portable SSD.  While the 1TB model is in the middle of the typical price range.  Price isn’t everything though, keep in mind the rated transfer speeds, long with durability.

If you want one of the fastest portable SSD drives available, take a close look at the ADATA SE800.