9th Gen Intel Core mobile (H-series) processors are slated to be released sometime during the  second quarter of this year. Intel isn’t disclosing specifics on the portfolio of high-performance mobile processors  that will be launched for upcoming high-performance laptops for gamers and creators, but did talk about some of the new features that they would have. The new H-Series processors will feature Intel Wi-Fi 6 AX200 (Gig+) Wi-Fi technology for fast, low-latency wire-free gaming along with Intel Optane memory H10 and Thunderbolt 3 connectivity. 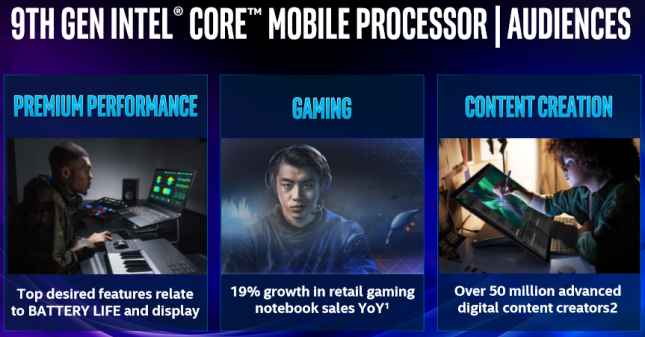 Intel says that this featured technology will allow for amazing system performance and responsiveness in thin mobile gaming platform. We’ll have to get some laptops with the 9th Gen Intel Core Mobile processors in them to see how true that statement really is!