One of the things that Legit Reviews has been working on behind the scenes this month is building up a new SSD test system for improving the way we benchmark storage drives. With more PCIe Gen 4.0 drives getting ready to enter the market we figured that it was time to jump ship from Intel to AMD. AMD was the first company to offer PCI Express Gen 4.0 support with the introduction of the X570 platform in the middle of 2019 and it has been a hot topic ever since. Intel has not announced when they will release a desktop platform that supports PCIe Gen 4.0. Rumor has it that PCIe Gen 4.0 will not be included on the upcoming Z490 motherboards that will be released when Intel 10th Gen ‘Comet Lake-S’ processors come to market later this year. So, moving over to the AMD X570 platform for storage testing made sense for the site as we need to have relevant data for our readers on the products that are selling right now.

The total build cost is around $1,250 and that seems like a fair price for a system of this caliber and it should also look good thanks to RGB everything. Our previous test system was done on an open test bench, but we had people wanting to know about thermal performance inside an enclosure. So, we built the new SSD test system for 2020 in a case not only to show thermal performance, but to also better mimic real world usage scenarios. Thermal throttling can impact SSD performance, so we’ll be doing all of our testing with the tempered glass side panel on this year. An image of the finished build can be seen below. You’ll notice that we did add a rear Corsair LL Series LL120 RGB fan to improve the chassis airflow and went with the AMD Wraith Prism LED RGB CPU cooler since it looked better.

Our decisions seemed solid when we were piecing the build together, but you never really know how things will work out until you complete the build. Luckily, everything came out great as it is fairly solid and the DDR4-3600 memory had no issues being setup on this ASUS X570 board. It has been a hot minute since we’ve used an ASUS TUF Gaming series motherboard on a regular basis, so we overlooked the fact that it does not support ASUS Secure Erase in the UEFI/BIOS. Since this is an SSD storage test system that is kind of a big deal and it was a feature ASUS first introduced back in 2013 on their ROG motherboard series. It seems that ASUS is still using that as a differentiation between the TUF and ROG series here in 2020. So, we’ll be using Parted Magic ($11 for the latest build or $39 per year) on a USB Drive to secure erase all the drives we test. Windows 10 Pro version 1909 was clean installed and setup without issue.

We’ve been busy behind the scenes with the tedious task of re-testing many of the drives that we’ve been sampled over the past couple years. That means each drive was secure erased and had its firmware updated if a newer build was available. The move over to a new test system also gave us the chance to update and improve our test suite. One of the big wishes from the community that we’ve heard loud and clear is that we need to move from PCMark 8 to PCMark 10. 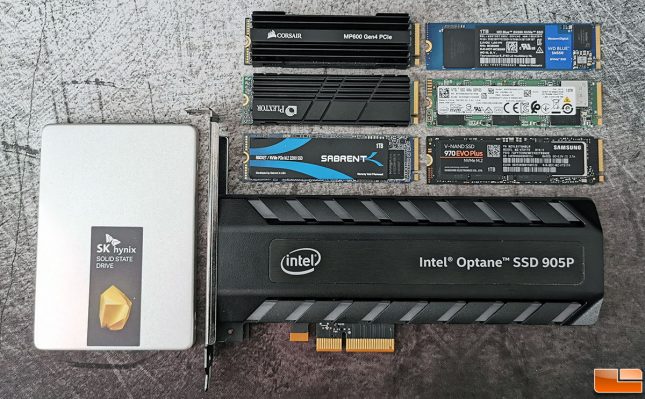 We started off testing 960GB to 1TB SSDs on the new system since that is one of the most popular capacities for enthusiasts right now. The first eight storage drives that we tested on the new SSD test system are listed below along with the respective firmware that they were tested with. 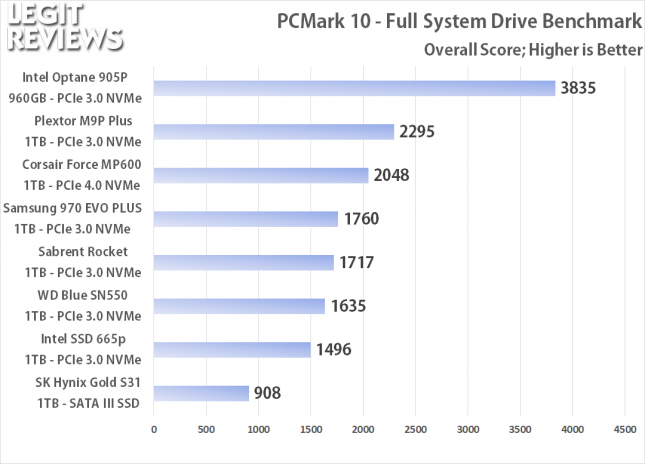 On the full system drive benchmark the results show the Intel Optane 905P 960GB drive dominating the other drives as it should since it is the highest priced drive of the group. The Plextor M9P Plus (PX-1TM9PG+) at $134.99 does extremely well on this benchmark as it was able to top the Corsair Force MP600. The Corsair Force MP600 is the lone PCIe Gen 4.0 x4 drive of the group, so many might have expected it to be the winner by a long shot. The SK Hynix Gold S31 is the only SATA III SSD in the group and it comes in last place as one might expect. 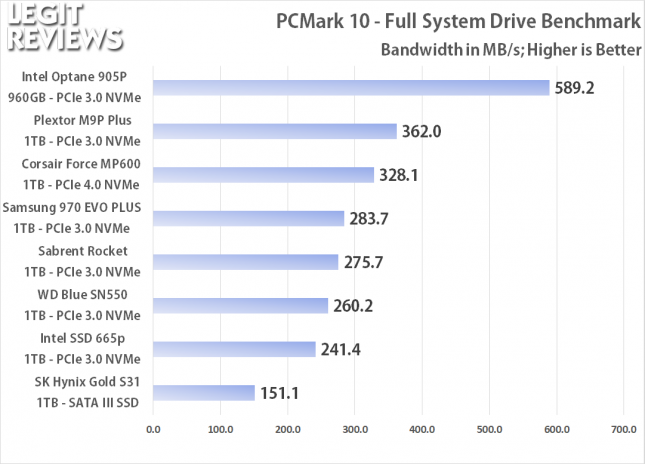 The PCMark 10 Storage Benchmarks overall score is calculated from the bandwidth and average access time sub-scores. The bandwidth subtest is defined by UL in PCMark 10 as bandwidth = bytes / busy_time_for_read_and_write. Here we see nice scaling as the SATA III drive got around 150 MB/s, the NVMe drives running tradidional NAND Flash were around 200-400 MB/s and then the only 3D Xpoint drive of the group was pushing close to 600 MB/s. 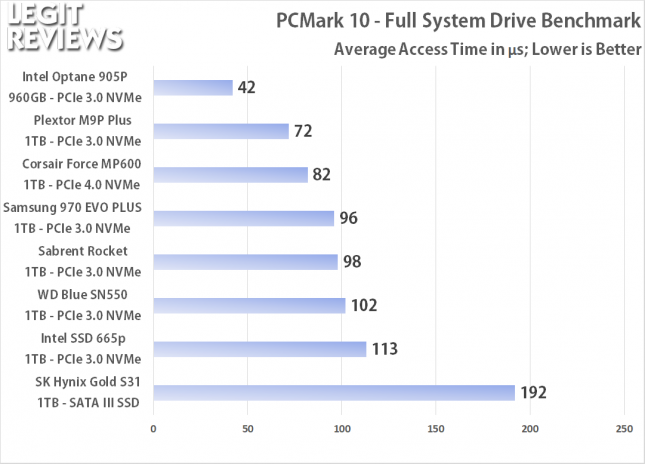 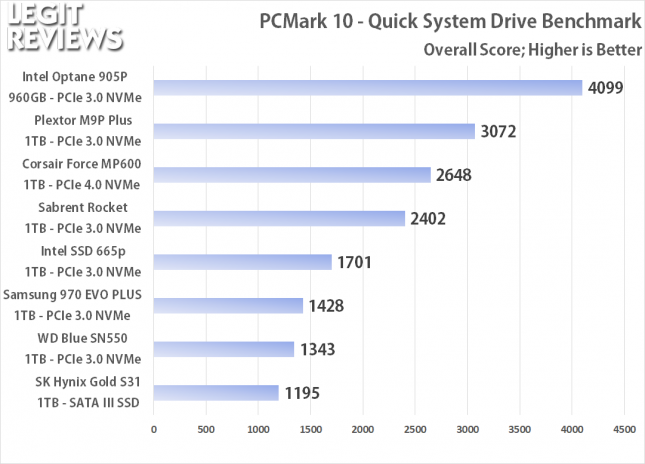 The results here are mostly the same on the top and bottom, but we do see some drives perform differently in the middle. The big movers were the Samsung 970 EVO Plus 1TB and the Intel SSD 665p 1TB SSDs. The Samsung drive performed worse than expected and moved down two spots whereas the Intel SSD 665p performed better than expected and moved up two spots. 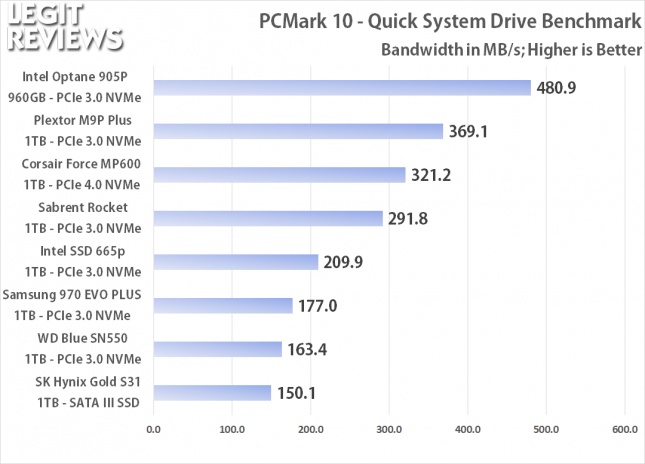 The vast majority of the drives had lower bandwidth speeds in the quick system tests with the exception of the Plextor M9P Plus and the Sabrent Rocket. 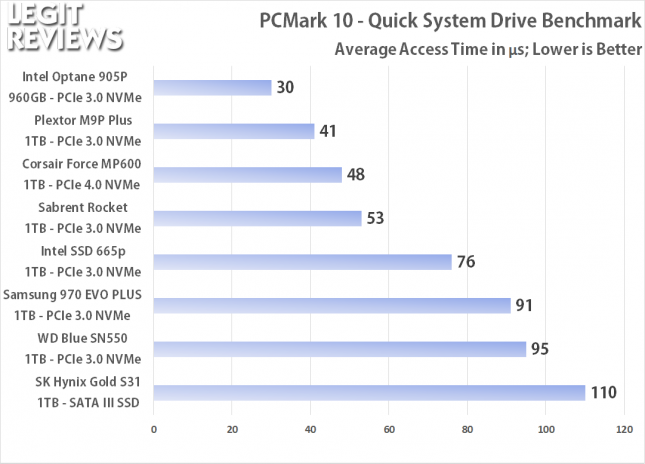 The average access times were lower on the PCMark 10 Quick System Drive benchmark and show some great scaling as you can see from the table above. 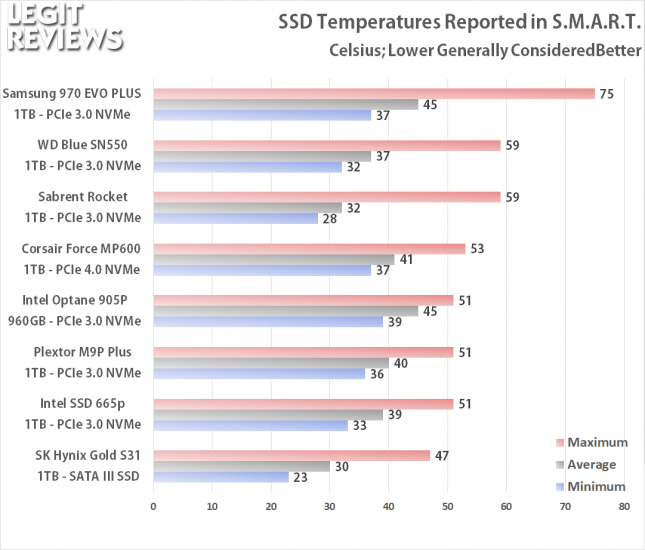 The other thing that complicated matters is that several of the drives were reporting two temperatures. We reached out to our PR and engineering contacts at the seven companies that make these eight drives and stumped some of them as to what each sensor is exactly reading. We ended up charting the first sensor reported to make the chart above and the ambient room temperature at the time of testing was 21C or right around 70F.

We just wanted to let our community know what we have been working on behind the scenes and this is just a quick look at a couple of the new things that we are doing. The new SSD test system will be heavily used in the months ahead and we look forward to providing the community with a better look at the storage drives that are available for purchase. The goal of this site has to always provide you with the best information in order to allow you to make the right purchasing decisions. By moving to the AMD X570 platform we hope that we are able to do that for our readers and all those that they influence.

Some new and exciting SSDs are on the way this year and we’ll be doing our usual full storage reviews on them. Expect to see all of the new updated benchmarks numbers later this month when our first reviews using the new test system are posted.

If you have any comments or feedback on how SSDs are tested please let us know in the comment section below. We are always looking for community feedback and enjoy the interaction!

UPDATE (02/18/2020): We have had several people ask about the performance on drives using the Silicon Motion 2262EN controller and the WD_Black SN750 since this article was posted. We have tested the HP EX950 1TB and WD Black SN750 1TB drive and have created a few new charts to show those results below. 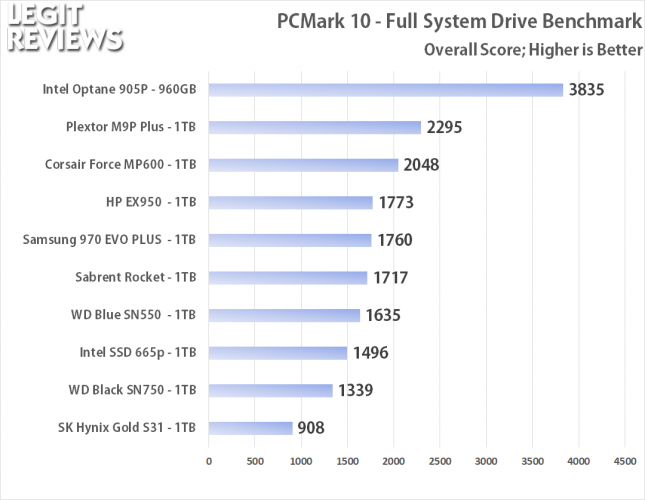 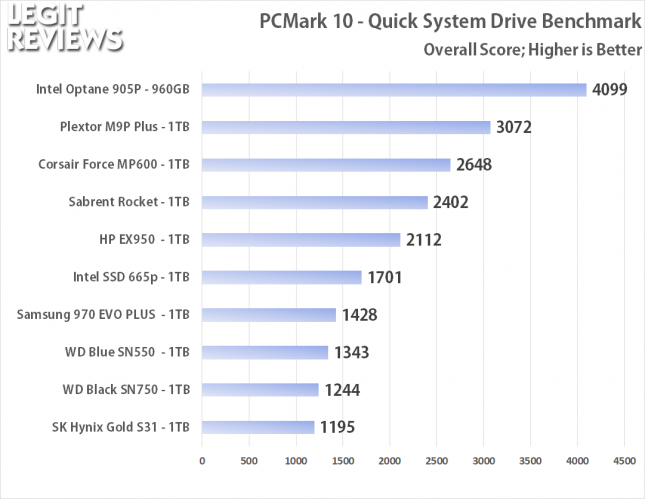 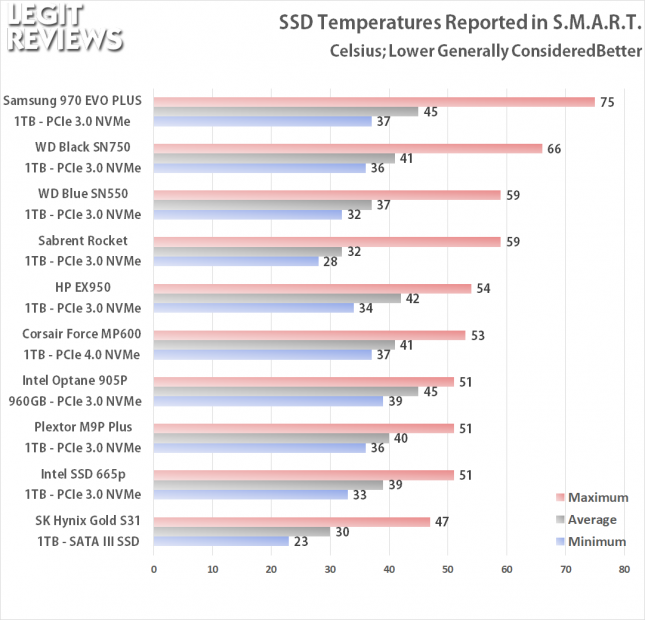