What happens when you have an infinite supply of hard drive parts, 400 hours and a passion for hard drive and race cars? Rob Ryan, Western Digital (WD) Technologist, Advanced Concepts Team, and his family set out to create a WD F1 car unlike anything the world has ever seen. The WD F1 car looks like a real RC car and is comprised of 5 spindle motors and two Voice Coil Motors (VCM) from WD hard drives that are all still functional but only the drivers head is powered. 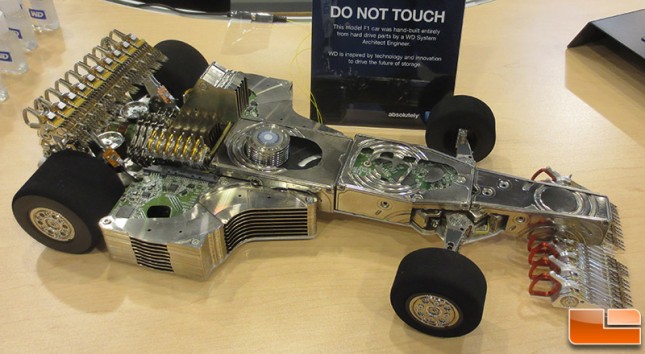 Rob Ryan carefully crafted this F1 car and at first glance it is hard to imagine that it came from hundreds of hard drives! The front wheel hubs are from 10,000RPM drive motors and the rear hubs are from 7200RPM 4D motors. The hubs were CNC milled down in order for them to work. The wheels and tires were made from a High-Performance Acetal Resin by Dupont called Delrin. 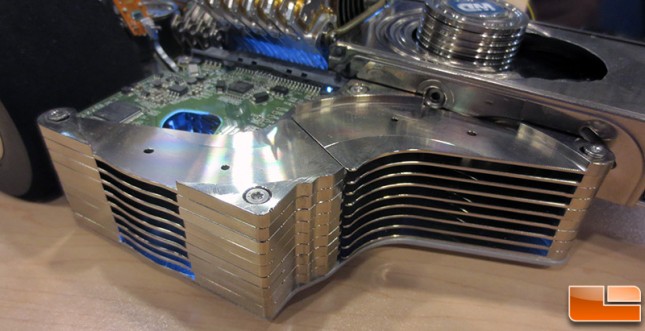 The swooping body sides are the anti-disks from WD Red hard drives. 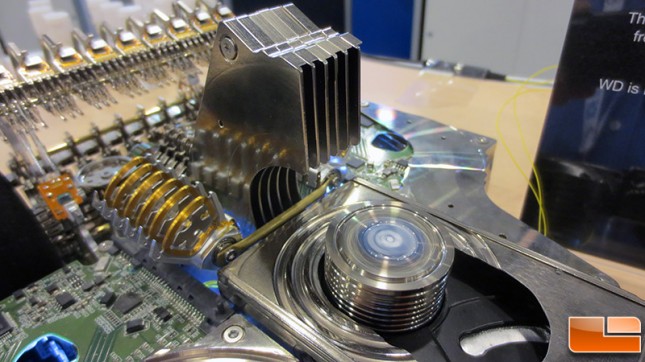 The race card drivers head is a four disk motor populated with disk spacers. The V-12 engine hood scoops above the drivers head are the full anti-disks from four disk drives and were trimmed to fit. Rob Ryan used 12 matching WD Scorpio notebook drive actuators to make the motor. The brass tube that holds the motor together with torx screws was cut, tapped and flattened for it to work. 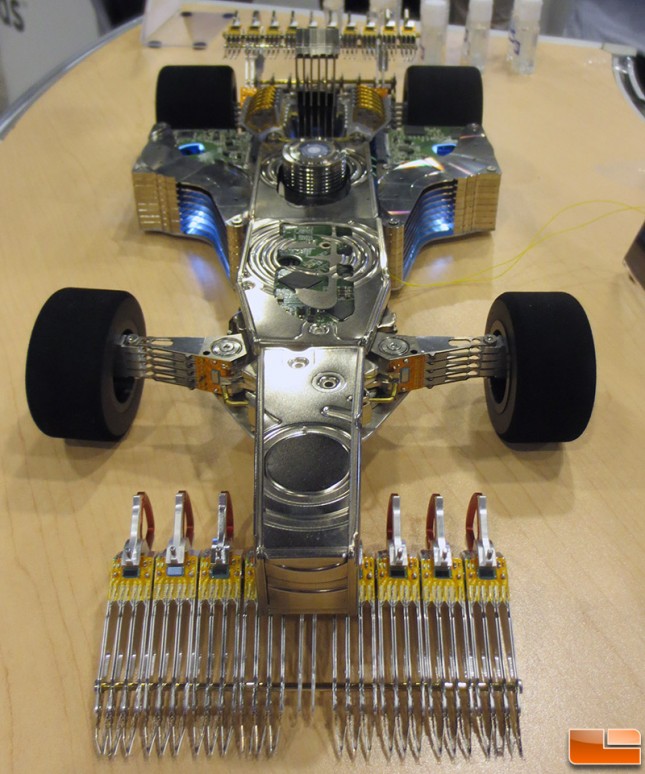 The front wing is made from WD Red Actuators and looks pretty mean! It was assembled with a brass tube that had been cut and tapped for torx screws from WD Drives. 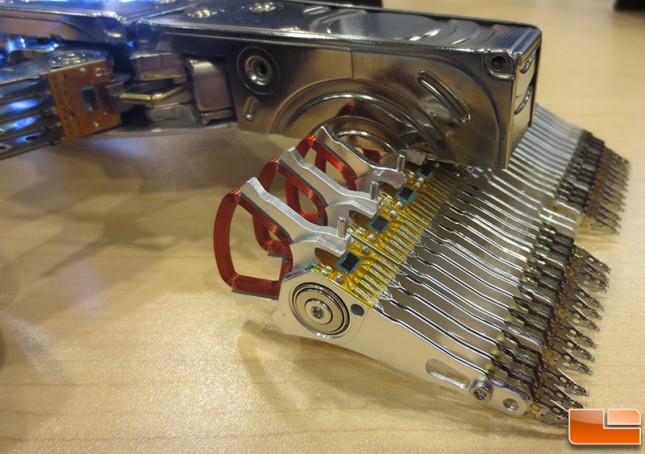 The F1 cards suspension is made from WD Black 4 Disk actuators. Brass tubes and torx screws clamp the actuator bearings to the base plate. The VCM magnet plates were trimmed to fit closer together. Special standoffs were hand made to hold the magnet plates correctly without the base casting and rear support. The front wheels steering bar is connected with brass tube and rod pushed over the latch bias pins of each actuator. It is stiff and does not move much. It is not powered at this time but could be powered to make the front wheels steer. 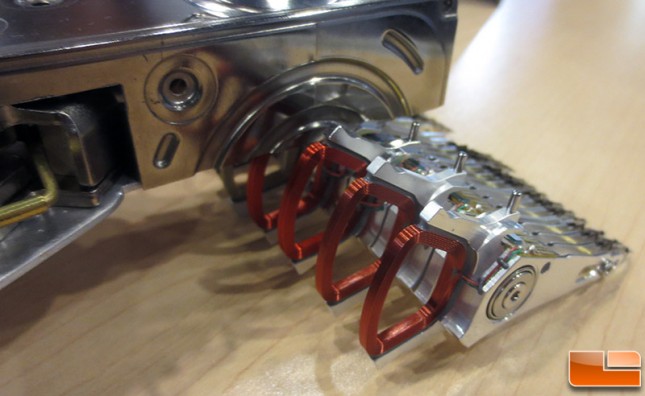 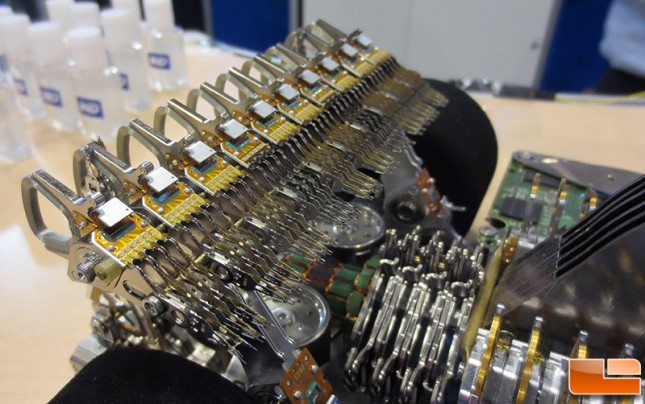 The F1 hard drive cars rear wing is made from WD Velociraptor actuators and held up with Scorpio actuators. 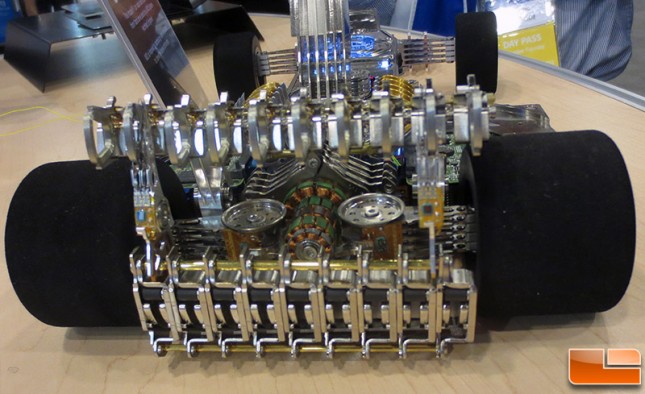 The rear diffuser is a stack of VCM magnets and steel from Velociraptor drives. 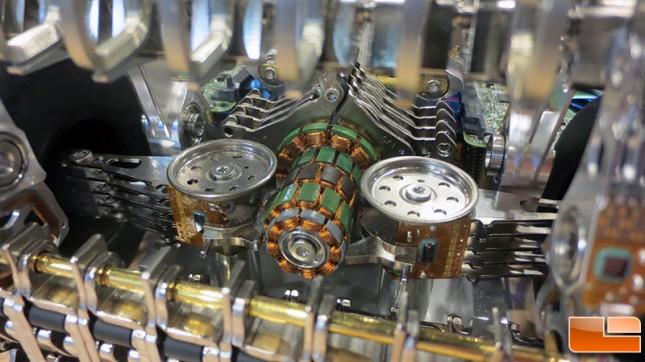 The slick looking V-12 engine is made of from WD Scorpio actuators from smaller notebook hard drives. The transmission directly behind the motor is made up of stacks of Scorpio VCM magnets and the differential is a stack of spindle motor windings from many different motors. This is the first time that we have ever seen the inside of a spindle motor!

Rear suspension is held down with Scorpio disk clamps. Rear suspension is supported by machined aluminum bosses screwed to the base plate. You can see the Scorpio 1 disk front and 2 disk rear actuators holding up the rear wing. 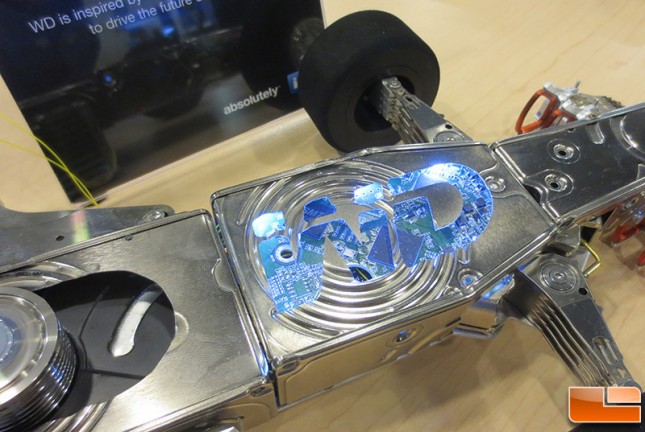 The body of the WD F1 car has a few LED lights on a hard drive circuit board that work. The LED lights are on circuit board sections from WD My Passport portable hard drives, so even that was custom done. The LED lights and drivers head motor are controlled by a Pololu Baby Orangutan robot controller. The motor driver is a Castle Creations Sidewinder Micro RC brushless motor driver and it is powered by a 12V power supply. Rob Ryan wasn’t done there and then wrote custom code in C to bring the creation to life, so there are different lighting modes and the drivers head can spin at different speeds and reverse direction!

That my friends, is what you can build when you have access to an unlimited number of hard drive parts and have the knowledge and time to build something truly custom!