12 Desktop Processors Tested on Blender 2.80 versus Blender 2.79b

Legit Reviews has been using Blender in our benchmarks for years and hopefully you’ve found the results worthwhile and interesting. Blender, for those that might not know, is the free and open source 3D creation suite. It supports the entirety of the 3D pipelinemodeling, rigging, animation, simulation, rendering, compositing and motion tracking, even video editing and game creation. We’ve been using Blender 2.79 in our CPU test suite since it came out in September 2017, but that is going to change today as we’ve re-tested all of our CPUs now that Blender 2.80 was released a little over a month ago. The release of Blender 2.80 is a big deal as it features a new interface, viewport, realtime renderer and more. What really caught our attention on the hardware performance side is that it brings significant performance enhancements. We were very interested in seeing how moving from Blender 2.79 to the new Blender 2.80 build would improve rendering times. 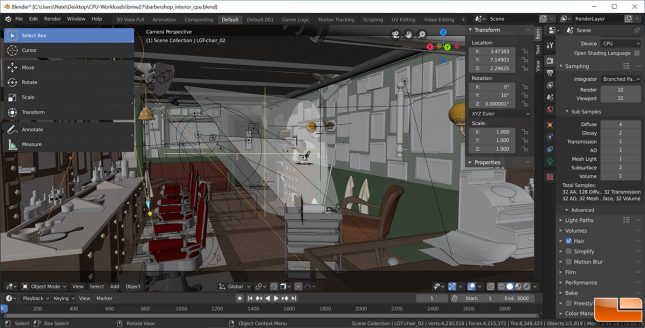 So, let’s go over our test setup and get straight to the results of our testing on Blender 2.80 and compare them to our Blender 2.79b results! 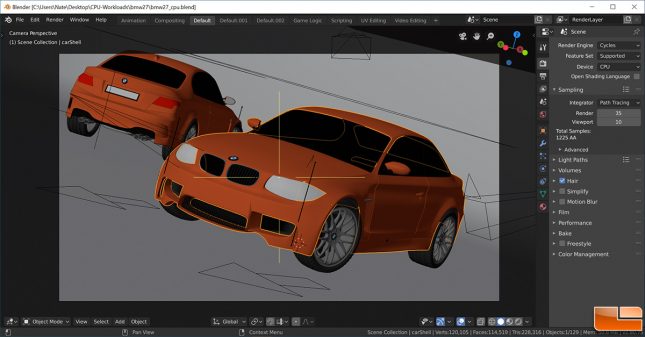 For testing we will be comparing an Intel Z390 desktop platform to an AMD X570 desktop platform with six processors from each company at several different price points. Windows 10 Pro 64-bit v1903 with all updates as of 9/02/2019 was the operating system used and all the drivers were updated. Both systems used Corsair Hydro Series H115i PRO liquid CPU coolers and the same 1TB NVMe SSD.

Here are the benchmark results of the BMW27 CPU benchmark cycles workload in Blender 2.79b and Blender 2.80: 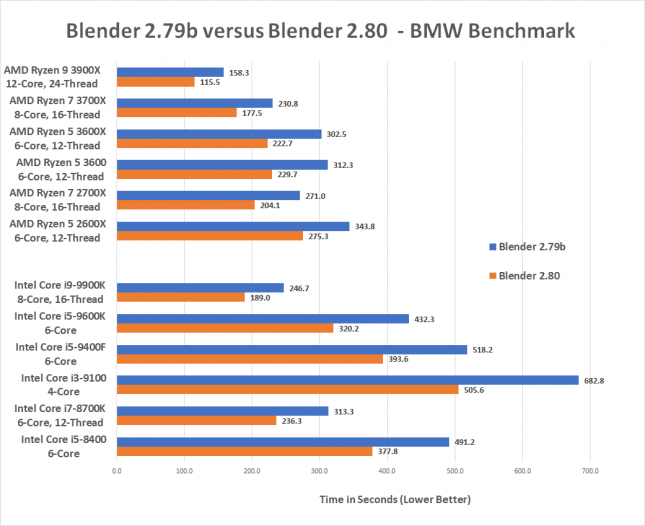 These are night and day performance gains here! Legit Reviews reached out to Blender and was told that the main reasons performance improved in such a dramatic fashion is due partly to more efficient Russian roulette termination. The improved Russian roulette termination used in Blender 2.80 on various scenes resulting in roughly 10%-30% faster renders for similar noise. We were pointed to this page for a list of the other optimizations done in Blender 2.80. 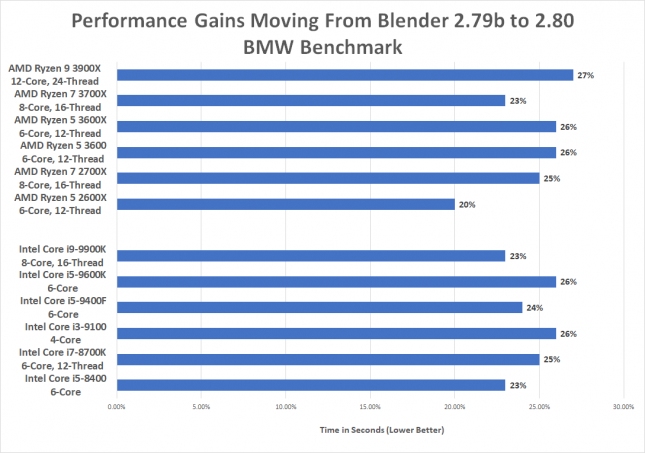 When it comes to overall CPU performance we are seeing an average performance improvement of nearly 25% by simply moving from Blender 2.79b to Blender 2.80 using the very common CPU BMW benchmark. AMD Ryzen and Intel Core series processors all benefit by about the same amount when moving to the latest Blender build. So, you get the new user interface, 3D viewport, ‘Eevee’ physically based real-time renderer and much better rendering times.

It took almost two years for Blender 2.80 to be completed, but it is a major update with some of the biggest performance gains that we have ever seen before. We’ll be including Blender 2.80 results in our CPU tests moving forward and just wanted to give you a quick look of Blender 2.79b versus Blender 2.80 on the same test platforms before we make the switch.